Netflix released another original film September 29, 2017, ‘Gerald’s Game’. If you are a Stephen King fan then you already know this film is based on one of his bestselling books. Stephen King released ‘Gerald’s Game’ in 1992. So, it has been a long wait for his fans to see it come to life on the small screen. If you haven’t read the book I will give you a review of the plot of the film and book. 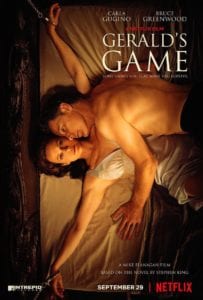 Jessie (Carla Gugino) and Gerald (Bruce Greenwood) Burlingame go to their lake house to work on their relationship that had been going badly for a few months. This was a weekend to spice up their sex life and play some sex games. Jessie being the dutiful wife agreed to play along and allowed Gerald to play out his fantasy of handcuffing her to the bed while he pretends to be a stranger and have his way with her. Gerald pops a little “blue” pill to get the party started but as the role play gets to be too much for Jessie she quickly decides that she cannot play along. The couple realizes their troubles will not be fixed with kinky bedroom games however Gerald decides to continue with his fantasy. Jessie fights back but Gerald is stopped suddenly when the pain that hits him in the chest and he collapses on top of Jessie with a heart attack. Jessie panics and kicks him off her and off the bed onto the floor and that is when her nightmare truly begins.

The beauty of Stephen King is his ability to make us realize that sometimes humans are scarier than any monster hiding under our beds or any movie monster that even HE could create. Jessie slowly descends into madness as the reality that she cannot get free from the handcuffs. As she breaks the viewer sees her madness take form as the “ghost” of her now deceased husband and her own alter “ego” talking her through her ordeal. We learn that long before her unhappiness with her marriage that she had suffered something that nightmares are truly made of. Something that is truly terrifying even more so than the starving dog that has found its way inside to eat her dead husband and her nightly visit from “death”.

I read ‘Gerald’s Game’ many years ago myself and as a Stephen King fan, I will honestly say I did not enjoy the book as much as I had hoped. The book bounced around and would lose me at times but I still enjoyed it. However, the movie was better and it summed up everything in a nice and neat package and in a short time frame. I will say the “escape” scene was extremely more graphic in the movie than it was ever in my mind. I am a huge fan of horror and it takes a lot for something to make me look away but her escape from the handcuffs made me do just that. 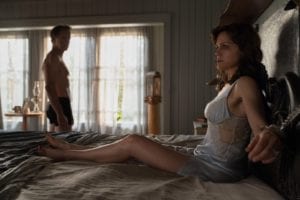 So, I would recommend it as a watch but if you are trying to convince your significant other to “play a little game” in the bedroom, I would not watch it with them because it might spoil the mood.