So, fans have been wondering about Negan’s bat for years. In fact, it predates the show and goes to the comic books, so we’re talking old school! People were asking about an origin story for the vampire bat almost as soon as Negan was introduced. Negan’s weapon has become somewhat iconic and fans just knew in their hearts it had to have a cool origin story. Well, the origin story is kind of cool but also really funny. Still, after “Here’s Negan” I’m surprised that Negan named a stupid bat after his wife. Those were his words by the way, not mine. Lucille is iconic, the freaking barbed wire vampire bat is amazing. So… where did she come from? Well, here’s Negan’s Lucille’s origin story! 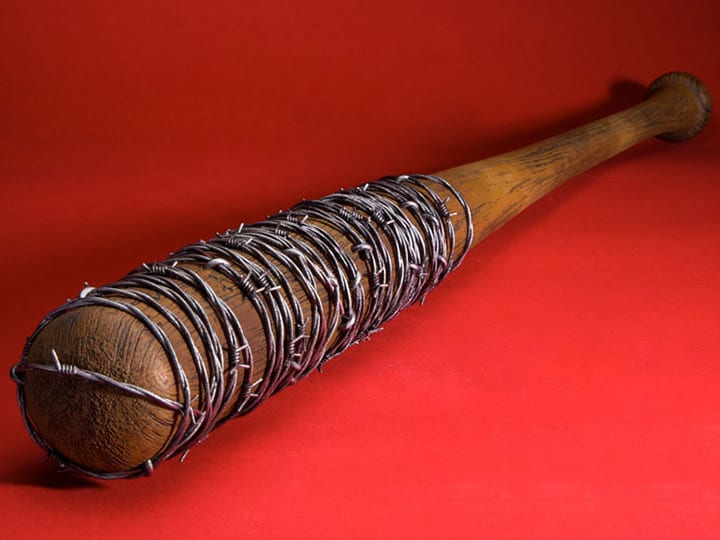 So, Negan was actually a pretty good dude pre-zombies. I’m gonna shorten the story a little here so that we can focus on discussing Lucille’s origin. Negan’s wife Lucille had cancer and through a series of very unfortunate events, they lost her last two chemo treatment bags. This led to Negan promising he would find more treatments for her and he heads out. He located the medicine but one of the people he locates, Laura, knocks him out with a baseball bat. After securing the treatments Laura gives him the bat since Negan is weaponless. “Damn Girl,” Negan says while smiling down at his future weapon of mass destruction “You pack a wallop.”

Not even ten minutes later in the episode, Negan wraps the barbed wire around it and uses it to kill the bikers who had held him hostage. As far as origins for inanimate objects go this is, I have to admit, one of the better ones. It might not be something we necessarily needed but “Here’s Negan” was also one of the best Walking Dead episodes in a long time!