My Year of Gaming: Middle-Earth: Shadow of Mordor

I purchased a Playstation 4 at the beginning of 2017 and it is the first time I have had a console since Legend of Zelda: Skyward Sword came out on the Wii. Naturally, I have a lot of catching up to do and my backlog is incredibly massive. During the course of a year, I played my way through 23 games, and I figured I would take the time to share a little bit about each game. Perhaps you’ve played them and want to hear another opinion, or maybe you’ve been holding off on investing in a particular game. Either way, it’s never a bad time to spread your love of gaming.

Shadow of Mordor (2014) has been one of those games that since it’s announcement, I’d been longing to play. The game takes place between the events of The Hobbit and The Lord of the Rings. Players assume control of the Ranger Talion, who is part of the Gondorian force at the Black Gate of Mordor. Following the fall of his garrison, Talion sets off across Mordor, seeking revenge against those that murdered his family. Somehow, Talion has been merged with a wraith named Celebrimbor, who also seeks revenge against Sauron.

The fighting system for Shadow of Mordor is reminiscent of Assassin’s Creed and the Arkham games in that the melee has a flow system. You will also have to regularly engage in stealth missions and have incredible parkour abilities. As the game progresses, you level up and can unlock new skills including possession of Uruks, spirit attacks, and animal control. My favorite thingwas being able to shoot arrows into a campfire and make them explode. It was my go-to method of taking out Uruks. 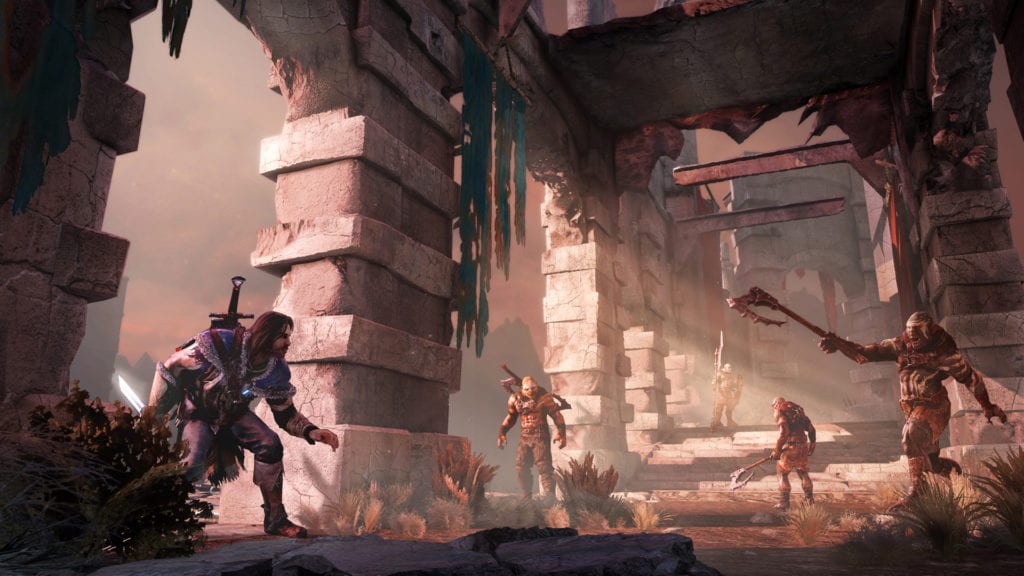 The world is massive and I found myself running in circles at times because everything looked pretty similar in the first half of the game. There are spirit tours located throughout Mordor that you can forge, which can later be used to fast travel. The only problem is that there is no indication while you’re running around that it is a tower you’ve already forged or not. So I would frequently be heading toward what I thought was a new tower, but it was one I had already forged.

Shadow of Mordor introduces the Nemesis System which acts as the order of command for the Uruks of Mordor. This means that if you’re killed in battle by an orc, they can actually rise through the ranks. And unfortunately, the higher they rise, they’ll remember who you are and try to seek you out. This was especially frustrating in the beginning when I was trying to get a handle on everything because I had Uruks that kept finding me, killing me, and then they would be level 10 and impossible to kill in the early stages of the game.

It’s a cool system once you figure out how it all works. In game, you can gain intel on the captains and warchiefs that reveals their strengths and weaknesses. For example, an Uruk may be susceptible to stealth kills. This means that it is an insta-kill. However, if you don’t gain intel on a target, none of their weaknesses can be exploited and you’ll have to take them out the hard way. One thing that was incredibly impressive was the Uruk designs. No two was exactly the same. And there are a lot of Uruks. 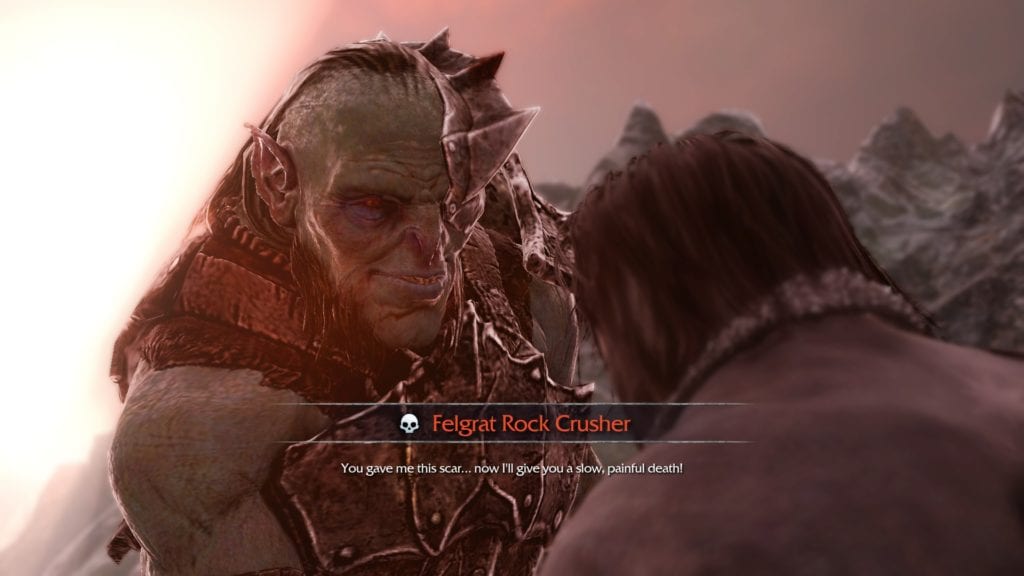 My only issue with the game is that it got a little repetitive. You spend the first half of the game taking out the five warchiefs so that one of Sauron’s right hand men will make his appearance. But after that happens, you are taken to a different part of Mordor and have to start the whole process over again. There are some minor differences, but you still have to take on the five warchiefs in order to weed out Sauron’s other generals. It started to get a little laborious.

There is a lot to do post-game as the warchiefs reset upon beating the game and any nemesis you might’ve had during the campaign will still be around. There are three DLC stories that come with the ‘Game of the Year’ edition. I started playing ‘Lord of the Hunt’ but it was really difficult and I eventually gave up. At that point, I had kind of had enough of doing the same things.

Overall, Shadow of Mordor is worth a play if you’re a fan of Lord of the Rings. The story is interesting and it’s cool to see what happens in the sixty years between The Hobbit and Lord of the Rings. This game has its fair share of amazing moments that make it really fantastic and worthy of being “game of the year.”

Home » Fandom » My Year of Gaming: ‘Middle-Earth: Shadow of Mordor’