Mr. Robot went into season two coming off quite the finale. After building up all season the hack of a life time goes through, in the most unceremoniously quiet way possible (which we see through the opening flashback), thus bringing the financial world to it’s knees. Season two starts with a number of questions looming in the air. What happened to Eliot during those three days he can’t remember? Where is Tyrell Wellick (we all know he was wearing the mask in the F Society video)? What is F Society’s next move? How will Evil Corp respond? Tons of questions just floating in the air and with a premier that was an hour and half long we had to expect that some of them would be answered, right? 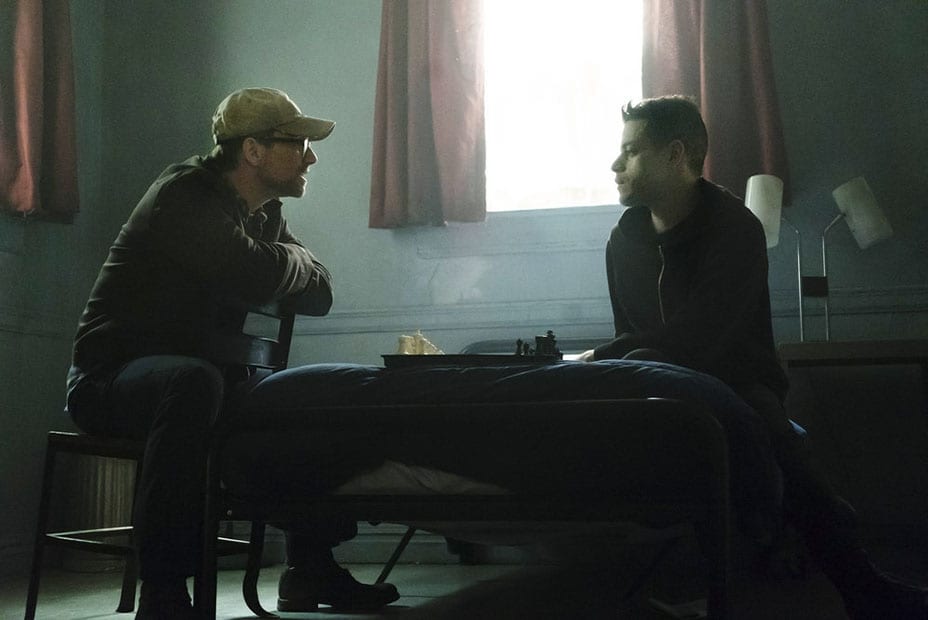 The first episode really didn’t answer any of those questions. As a matter of fact it didn’t really forward the plot all that much. Reading that one would suppose that the episode was a bust and that couldn’t be further from the truth. The hour and half of television that started at 10 p.m. last night is on a whole different level then anything else that is currently on television. Mr. Robot and Rami Malek have earned their Emmy nods, and last nights character study of Eliot proved how a show can exist without furthering the plot and still be head and shoulders ahead of the rest of the class. How very Seinfeld…

The main focus of this episode was Eliot and his struggle to maintain a sense of what is real and what is an illusion. Learning that Mr. Robot is not only his father but a projection of his imagination has been something, and I would imagine will continue to be something, that Eliot is going to have to wrestle with. It almost seems that one can not exist without the other which could lead to a tragic ending for Eliot, but we’re getting ahead of ourselves.

In order to combat the Mr. Robot visions, Eliot has constructed a by the numbers regiment that provides enough repetition to show what’s real and keep Mr. Robot at bay. This regiment doesn’t make Mr. Robot non existent but it allows Eliot to understand that he’s not real. That understanding gives Eliot the power to brush him off (peace). The scenes the two shared this week had a different tone as both resented the other for existing the way they do. Eliot hates what Mr. Robot does to him on a personal level and Mr. Robot hates how Eliot won’t take action. His anger even boils over to the point where he shoots Eliot in the head. Think about that for a minute. Your mental projection of your father gets angry with you and then shoots you in the head. Whoa…

We know through Eliot’s journal that this is something that happens almost daily (part of the regiment?) and it’s metaphorical implications are strong. Mr. Robot is clearly trying to chip down the defenses of Eliot and feels that one day he’s going to “shoot” him and everyone will be on the same page. Eliot grows wise to this and wraps his head in a desperate attempt to stay protected from Mr.Robot. There is something enviable and sad about Eliot’s war here. There’s no way that he can win, and watching him struggle to maintain some sense of normalcy is tragic. I want to believe that we the audience want him to win this battle but at the same time there’s a more compelling story if he loses. I’m a sucker for a story.

By the end of the episode we know that Mr. Robot is stealing his own time, when Eliot thinks he’s going to sleep. The scene with the notebook space was brilliant. I absolutely loved the imagery there and the sheer panic coursing through Eliot’s mind. It throws into question everything he’s doing. If Mr. Robot is able to steal time whenever he wants then how can Eliot believe anything that he’s seen. What could possibly be true and not a projected lie by Mr. Robot. We already know that Robot has been interacting with Ray (Craig Robinson), has to have been as Ray seems to know a lot about Eliot, and that automatically throws into question what else Mr. Robot knows. Like maybe the whereabouts of Tyrell Wellick (the only information Eliot wants to know actually). 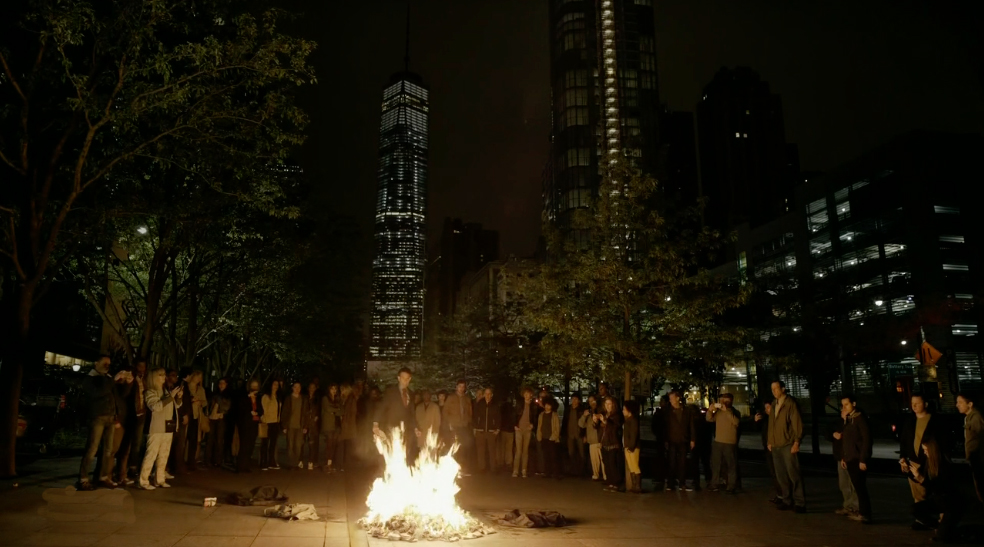 The episode does stray from Eliot to give us a glimpse of some of the other characters. We see that Darlene feels that F Society is still losing the war despite the epicness of their hack. Throwing a party in the house of one of Evil Corps big three with the balls of the bull statue from the stock exchange is cool and all, but Darlene aspires for more. A more personal attack which comes about with a $5.9 million dollar ransom, some lighter fluid, an F Society mask, and the best use of Phil Collins I’ve seen in awhile. It actually reminded me a lot of the Joker from the Dark Knight. That whole thing about some people just want to watch the world burn kept popping in my head. Not to mention, there’s a scene where the Joker burns a crap load of money because he can. Outside of the notebook scene this clearly was some of the premier’s best work. The imagery of all that money going up in flames was haunting and somewhat poetic.

How about Angela, who is now working in the belly of the beast and not so secretly enjoying it. A position that was supposed to be temporary has turned into an aspiring career, and we have to wonder what this is going to do to Angela as a person. For starters it’s given her more of a back bone. Season one Angela lacked a great deal of confidence and was more or less a fragile woman looking to be pushed over. Right off the bat that Angela seems to be dead. Or better hidden? Nothing like some mid night motivational tapes to keep the confidence up. I worry about how Evil Corp can corrupt her.

Someone who wasn’t able to walk away from the hack unharmed was Gideon who ran a business that was supposed to stop these types of hacks. Poor Gideon. His scene with Eliot was very good but was overshadowed by the fact that Eliot was trying to reign in Mr. Robot. We did find out that Gideon would be willing to talk to the police about Eliot’s possible involvement, and that’s exactly what he did. You can tell that it broke his heart, and his reward for that was getting shot in a bar. Right in the throat. Gideon became a sad footnote to the little people who get crushed by the wave of the hack. You have to imagine that there more of those stories waiting to surface.

And finally Waldo himself, Tyrell Wellick who we only see in the opening flashback and in one of those weird dominating sex scenes. But that is not the last we hear of him. Eliot trying to fight off sleep at an AA meeting loses that battle and then wakes up on the phone (in what I think was his apartment building) talking to Tyrell. I’m curious to know if Mr. Robot willingly gave up the power so Eliot could speak to Tyrell or did it in a way to mock him. Saying Eliot has no control. This war between the two could get very interesting. 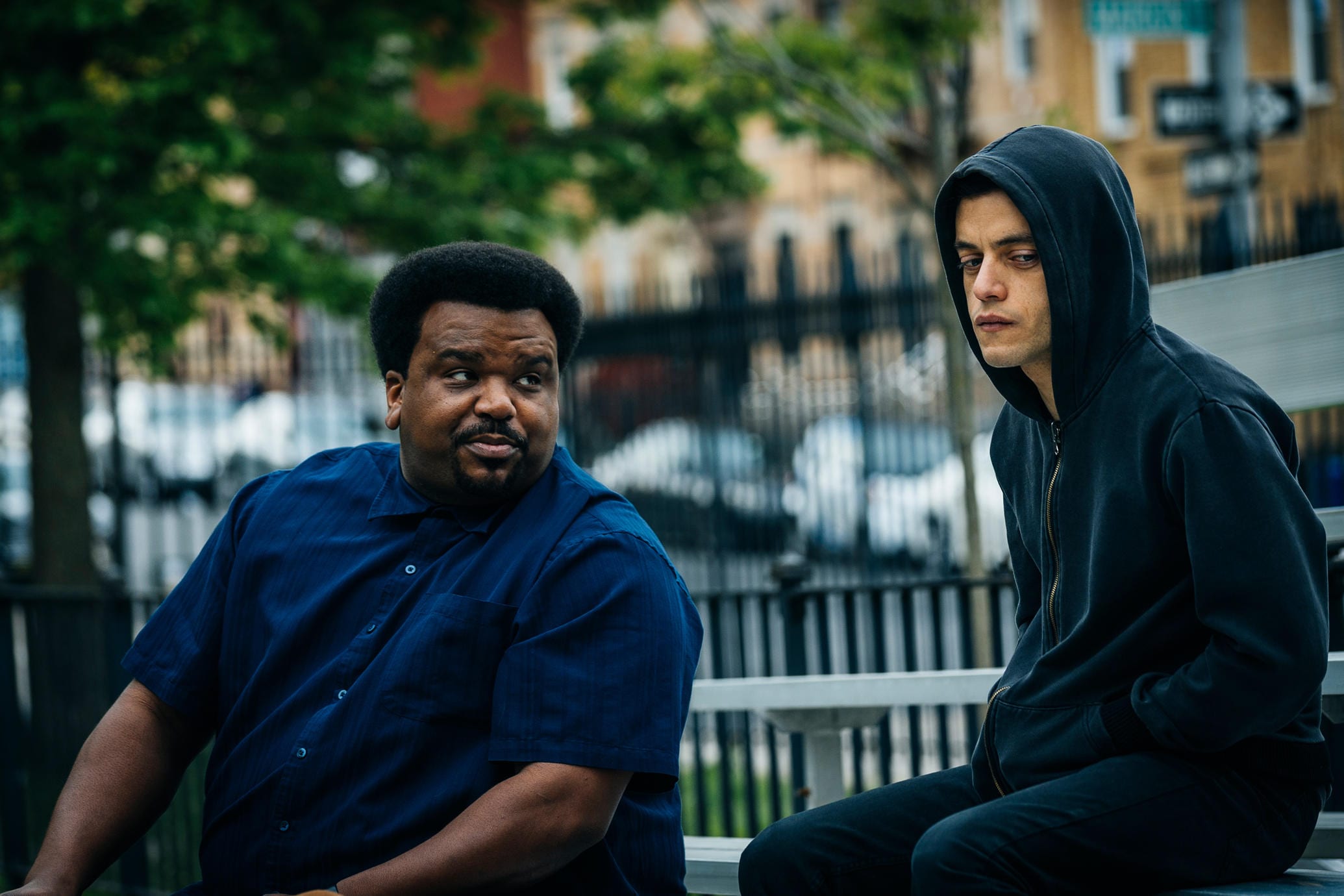 There you have it Geeklings. The season two premier of Mr. Robot gave us a lot to digest, and while the plot wasn’t furthered much the acting and writing were superb and has me excited about this season. There is still a lot left to explore in the fallout of the hack (talking bout you White Rose), and we’re just getting started.

If you have any theories, thoughts, or conspiracies feel free to leave them in the comments. The boards are yours.