Here we go Geeklings! Two episodes left and things certainly have hit the fan or in this case the diner window. Bullets are flying and last weeks episode left us wondering who made it and who is riding off to that big computer program in the sky. And while that’s an interesting question it’s not the the most interesting question. Let’s break down what we should be keeping our eye on this week, shall we? Of course we shall because that’s why you tuned in.

The obvious question is who did the Dark Army kill? Out of the three main characters in the line of fire I would say that Cisco is the most expendable. We already know that Dom is alive (we don’t know if she was hit or not though) which takes a bit of the suspense out of her plight, but she continues to be ahead of everyone as she called this assault with the releasing of Cisco’s image. This puts a big ole question mark over Darlene and I have to say I’m a tad bit worried. I’ve really grown to love the Darlene character this season, and her recounting the story of her kidnapping last week was both sad, tender, and upsetting. While her and Elliot grew up in the same house the two of them had totally different experiences and it seems that all that Darlene wanted was to feel like she belonged to a normal family. The whole story was pretty rough (and excellently acted) and could easily be considered a “good-bye” speech for a character. I’m just not buying it though. Darlene is worth more to this show alive then dead, although her death could ruin Elliot who is already swaying on the edge, but despite that I’m going to vote that she’s alive. The death of Cisco will be a new direction for her character as it changes her from being a murder to being the cause of someone’s murder. Yes, Cisco made his bed but all this Dark Army/F Society stuff has been escalated because of Darlene’s pushing. This death will have lasting effects on her.

I love how cavalier the Dark Army member is as he strolls off his bike and lights up the place. The Dark Army is on a whole different level, and while they may be waiting for Mr. Robot to give the go ahead on Stage Two, they certainly seem to be setting something in motion that will be catastrophic. I go back to the conversation between Whiterose and Phillip at the cemetery and how World War III was alluded to, and I think to a degree Stage Two is more than just crippling the market it’s about establishing world dominance. Don’t ask me for specifics here because I’m not sure I have them. I think they’re looking to expand beyond super powers, country wise, and develop either super corporations or super hacker groups. Instead of turning to America or China for salvation maybe Stage Two is trying to get the world to turn to the Dark Army for saving. I’m just spit balling here.

The real question though is what is Stage Two and with the recent disappearance of Mr. Robot I’m not sure if we’re going to find out in time. The phone call from Tyrell, or the person pretending to be Tyrell, sent Mr. Robot into hiding which is interesting for a number of reasons. If he had really killed Tyrell like he said then he would have no reason to vanish which leads me to believe that not only is Tyrell alive but he knows something pretty important. Whether that thing is Stage Two related (most likely) or could ruin the relationship between Elliot and Mr. Robot (because it’s so perfect) is yet to be seen.

I know I’ve talked a bit about Tyrell missing all season, and while it has been one of the shows bigger questions I’ve really enjoyed how it wasn’t the defining question of the season. Season two has been super interesting and layered without addressing the where abouts of Tyrell, and while maybe I would have liked to have had this answer sooner I’m thinking that when we find out (in the final episode, most likely the final shot) it’ll all come together. I came to you last week telling you to trust this show and let it tell it’s narrative and just enjoy the ride. Sam Esmail knows exactly what he’s doing and has all season long. There is a reason why we haven’t seen Tyrell all season and I’m willing to bet that when he appears all the walls are going to fall down, fourth walls included. 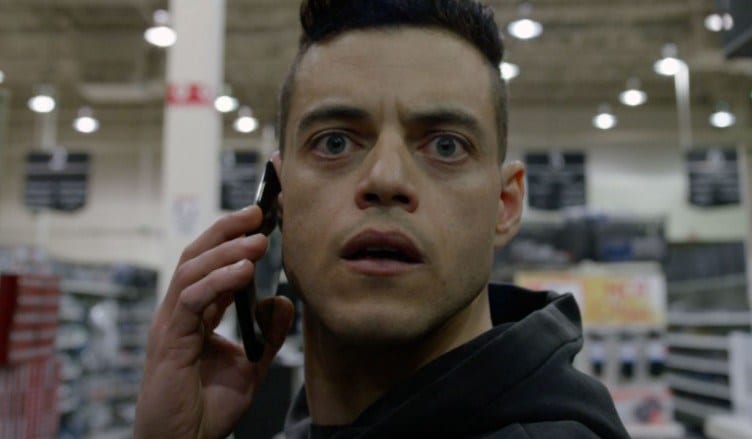 Ugh I didn’t even cover Angela and how she’s probably being kidnapped. I don’t think those people are FBI agents and I’m starting to think that they might be Dark Army related (the trailer helps with that thought). Something tells me that Angela is being taken to the same place that Mobley and Trenton are (#stillshipping) and some of this bigger conspiracy is going to start to unravel. I worry about her safety as she’s a loose end that could easily give up the entire thing without even knowing she’s doing so. She claims to not want to give up Elliot and the rest of the gang but I’m still not entirely sure that she didn’t record their conversation and if her back is up to the wall I’m not so sure if she’s strong enough not to cave.

There you have it. Two episodes remain and there’s still tons of questions left to be answered. The last month and a half Mr. Robot has been on fire and I truly expect it to continue that march to the finish line. I have a feeling once this season wraps we’re all going to be left with our jaws wide opening thinking “this was the plan the whole time?!” Which will make us all want to go back and re-watch the season and see how expertly crafted everything was. Comments belong to you guys.