Alright let’s take a moment and pick our collective jaws off the floor, maybe blink once or twice, mutter something like “what the…what” under our breath, close our mouths, look away from the television, now back at it is as if you want to catch it in a lie, shake your head and leave the room, and come back to rewind and re-watch the last ten minutes to make sure you weren’t mistaken. Spoiler alert, you weren’t. Most shows save the big twist for the season finales, or in this more modern age the mid-season finale, but Mr. Robot is unconventional like that. Mr. Robot says “hey it’s episode seven let’s melt some faces”, and that’s what they did. Because Geeklings, what the…what?

Last night we learned what happened to Elliot during those three days that went missing or I think we did in some way. At the very least we learned who was knocking on the door (come a knock on my door)… the police. So while Elliot doesn’t recall the three days immediately after the hack he has spent this entire season trying to hide the fact that he’s in prison from us. Us the viewer. His audience. Elliot has been lying to us. My man is in jail and even though he has created this false reality where he lives with his mother while trying to maintain his sanity it has all been nothing but a facade. In this scenario Elliot has been trying to protect himself and his mental well being but to a degree he’s been trying to protect us as well. 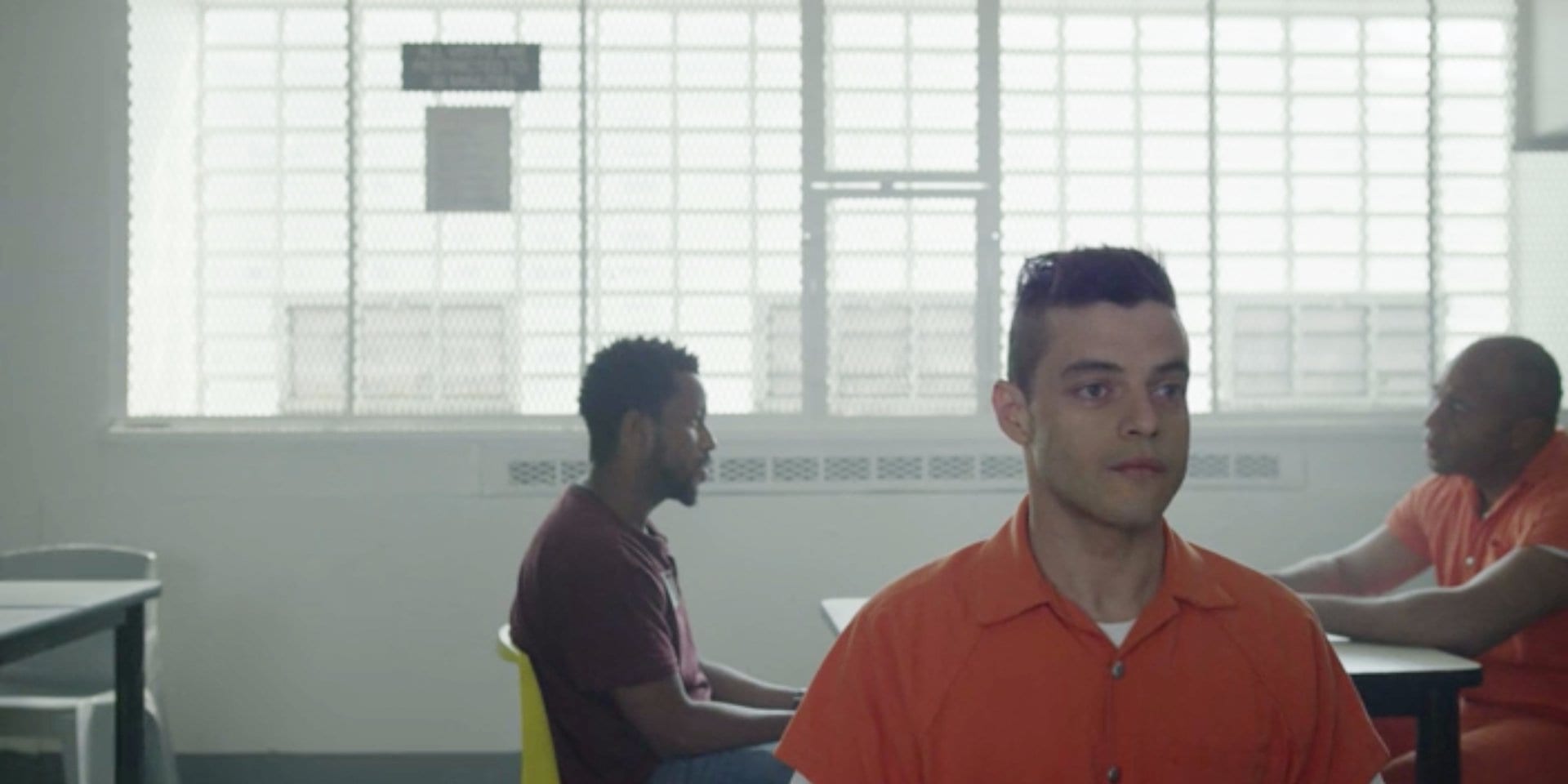 For starters this twist is crazy town banana pants and completely changes the dynamic of the season. After reading the interwebs last night and today it seems that this has been a theory since the season started, and I just missed the cues. Think about it. The door to his room slides closed, when he has a guest they only meet at the kitchen table, the red phone, and the lack of computers have all been little tells that have been pointing to the truth but we’ve been so enamored by Elliot’s narrative that we failed to see it. Well, I did at least. My bigger question was always centered around how much of what Elliot is telling us is reality and how much of it is delusion. A fair question to still ask as Elliot has spent the majority of this season lying to us.

I’ve said it before but it bares repeating that Mr. Robot reminds me so much of One Flew Over the Cuckoo’s Nest. With Cuckoo’s Nest we were also given a narrator that we couldn’t trust which throws the entire story into suspect. Chief tells us it all happened even if none of it is true which opens the door to the interpretation that Chief may have experienced those events in his mind but it doesn’t mean that they actually happened in real life. Read the first chapter again. At least the last paragraph or two. It’s all right there. I suppose the same could be said about Elliot. It’s true in his mind therefore it’s really happening, but now that we know the truth how are we supposed to trust Elliot again? He claims at the end of the episode that all the cards are on the table and he won’t hide anything from us anymore. Yet it becomes difficult to believe that when we know that Elliot is keeping things from himself. It’s the inception of narrator problems. I love it.

Now that we know that Elliot is in jail we have to wonder, why? What did he do? The obvious answer is the 5/9 Hack but there’s no way that’s what he’s in jail for that otherwise what’s the point of Detective Dom (who I love, but more on that later). Case closed. I was speaking with fellow Fan Fest employee Nick Floyd (our Director Of Visual Media and super big Mr. Robot fan) today and we were spitting theories back and forth. For starters it was a lot of fun to finally have someone to discuss the show with as no one in my immediate circle watches, but it really helped get the creative theory ball rolling. I for one believe that Elliot has turned himself in for the prison break from season one. I think Elliot still has guilt over the death of Shayala and the prison break is small enough to get him locked up but not large enough to call attention to the possibility that he was a part of 5/9. Plus even if he was a suspect what would the people in prison describe him as? A whacked out inmate who talks and plays chess with himself. There’s no way that he could pull a hack like that off.

I think it’s easy to discard the notion that Elliot is in jail for the death of Tyrell, which is something that Mr. Robot confesses to doing, because for starters Tyrell isn’t dead. I’m a firm believer of the George RR Martin way of life being that if it happens off screen it didn’t happen. Mr. Robot is still playing his chess game and feels that he can gain some sort of advantage over Elliot by saying this. Maybe pray on his vulnerability. Which explains the Full House scenario to protect him and this week how when Elliot was getting beat up he would change to Mr. Robot before each punch. Mr. Robot is playing that fatherly love card hard. Either way I don’t think Tyrell is dead. 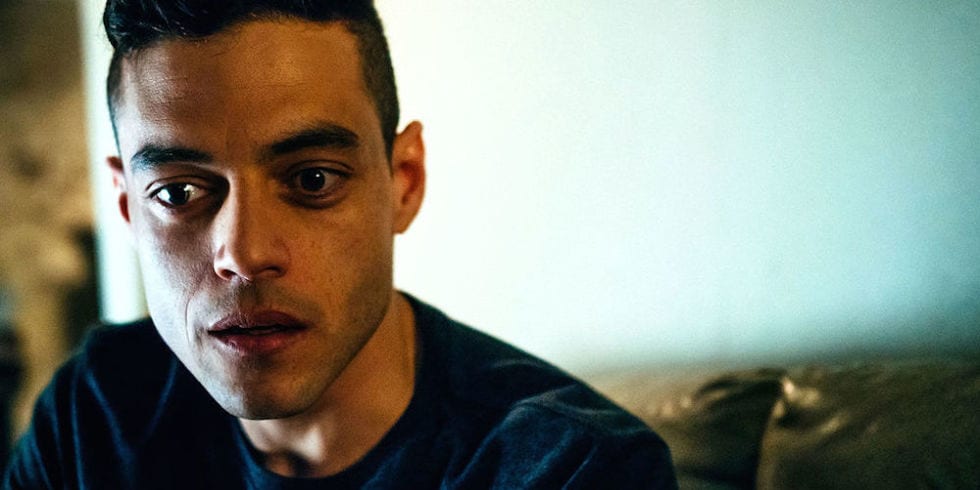 So, what does this mean for everything we’ve seen this season? Has everything been a lie? No. We have gotten some version of the truth. For starters Ray was probably a prison guard, Nick points out the dog could be a police dog, who had some sort of system or website set up with the inmates and asked Elliot for help with the website (further proving he’s in jail for hacking to some degree). Elliot in his delusion blows the whistle on it and that gets him in trouble with the other inmates leading to the assault and attempted rape (also, holy wow where did that come from?! Makes sense now). I do believe that Leon saved him and I do believe that he’s working with the Dark Army. That is all fact. I also believe that Elliot didn’t have a clue about this. The Dark Army is apparently everywhere and looking out for their own.

It’s clear that White Rose has some sort of stake in Elliot and either appreciates his gift or, and more likely, has plans for him. That’s what the letter is. My theory is White Rose writes a letter on behalf of the Dark Army taking claim for the hack that caused the prison breakout and gives a whole list of evidence. This brings about Elliot’s release from jail, further distances him from 5/9 since he’s obviously crazy (if they only knew), and now makes him owe White Rose a favor. Is White Rose the next phase of the hack? Well, if she’s not then she is certainly the person to help jump start it. Everything she does is calculated and one has to believe that there’s no way she would let Elliot go to jail without having some sort of plan that not only protected her but allowed the mission to stay on target.

I know, a really long review tonight but it was a huge episode with a lot to cover. Let’s break down some of the smaller points before letting our brains recover a bit

Ugh, Geeklings there is so much more I want to say but I think we covered all the important parts. I’ll be back next Tuesday (if I can wait that long) to talk even more theories. I think taking some time away, and maybe re-watching the entire season, could help get the thoughts flowing more soundly. Either way, what an episode last night. I’m so happy that this story is going to continue for a third season. Sweet Jesus, where could this possibly be going?!

And I didn’t even get to touch on the Mr. Robot Telltale mobile game that got released yesterday. I’m hoping to download it in the next day or two so next time I’m back to discuss the show I should hopefully have better info on it.

The comments are all yours Geeklings! Did you guys see that twist coming? What does it mean going forward? Will Elliot stay in jail? Will Dom bring down Angela and F Society? Ahhhhhhhhh! Take it away guys.

Home » Uncategorized » Mr. Robot- That Twist and A Review Too (But That Twist)