On principal I don’t watch a lot of shows on the USA Network because, to me, they look a little cheese. There’s just something about them that just sits funny with me. Maybe it has something to do with the fact that they all have the same sort of lighting. All glossed over and USA Network looking. This probably makes no sense to you but I’m sitting here going… yeah spot on. When I saw the previews for Mr. Robot it instantly stood out because it’s lighting was far from glossy. It was dark and brooding, and looked dangerous. It looked like the bad boy of the USA Network, and aren’t we all a sucker for the “bad boy”?

[Question. If you don’t watch things on the USA Network how did you see previews for Mr. Robot? Well that’s easy random question in the middle of my column… I watch wrestling every Monday night #noshame]

Everything I had read about Mr. Robot was crazy positive, and I had been interested but never jumped aboard while it was airing during the summer. Let’s be honest, sometimes shows with Christian Slater have a tendency to scare us away (I saw both Broken Arrow and Hard Rain and I’m still waiting for those hours of my life back). Yet despite that, the reviews were still positive and I totally got this darker Social Network vibe from it so I didn’t need much convincing.

Immediately Mr. Robot feels like it should be on HBO. There was this under current ripping through the show that made it seem so much more than a show about a mentally unstable hacker. There were real themes to be tackled here. Evil corporations, illegal hacking, our place in society, drug use, conspiracy, mental illness, love (?), courage, fear, being social, and debt were themes that weren’t popping up in other shows like Burn Notice. It was clear from the start that Mr. Robot had something it wanted to say, and boy did it say it.

By the end of the first season I was exhausted and in no way is that a negative. Possibly this had to do with the fact that I binge watched it, but mostly because the story is such a roller coaster. The ups and downs of Eliot’s quest in taking down the man and who he can trust and who is real and who isn’t. There were so many different layers spread through out this show that it’s almost literary. I love that about television shows. When there are deeper levels. That’s my jam. In that regard Mr. Robot reminded me of One Flew Over the Cuckoo’s Nest… well if that book was on acid. 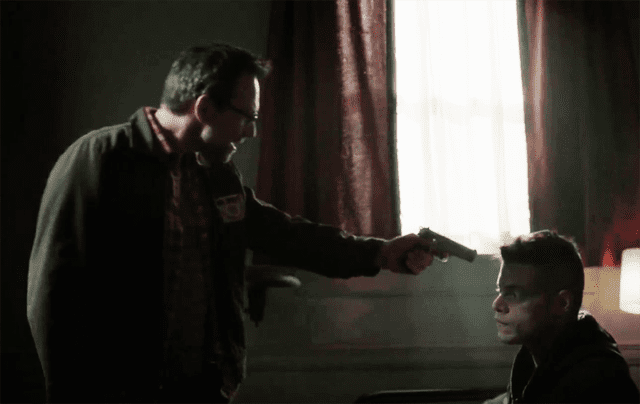 So what do we expect from season two. A show that came out of no where and just crushed (despite having Christian Slater in a staring role… that’s good TV Geeklings) has a lot to live up to for season two. I’ve seen a number of shows collapse under that weight (*ahem* Heroes *ahem*) and in some ways that makes me nervous. Although not very. The writing and production on this show is too good to slip through the cracks.

Season One ended with F Society pulling off the greatest hack the world had ever seen. They were heroes. Gods. All debt, gone. Like that. Everyone in the country gets to start off on the same page. These evil corporations are standing naked in the classroom as the world tries to find a way to catch up with what just happened. It’s the type of things dreams are made up of, and maybe it actually is. Is it possible that none of this happened? Sure. We know that it’s tough for us to trust anything Eliot sees. Have you noticed that the signs and news clippings in the background of episodes all match Eliot’s way of thinking? They never say what they’re supposed to say but what Eliot perceives them as (for example Evil Corp is always listed as Evil Corp). That’s the type of thing that makes me not trust what I’m seeing. Don’t get me wrong it’s still compelling and still holds my interest, but it’s more related for my concern for our main character/narrator. Is what he’s presenting us the truth? Or the truth as he sees it? Like I said, it’s all very One Flew Over the Cuckoo’s Nest.

We should expect more paranoia this season from Eliot. He pulled off the hack of a life time with his pals, found out that Mr. Robot is actually a mental projection of his dead father, kicked a drug addiction, and is now probably going to face some sort of investigation for what he’s done. Granted the world is looking in the direction of Tyrell Wellick, and I’m sure to a degree, that neither F Society or Tyrell mind this. Just another misdirect in a show filled with them. 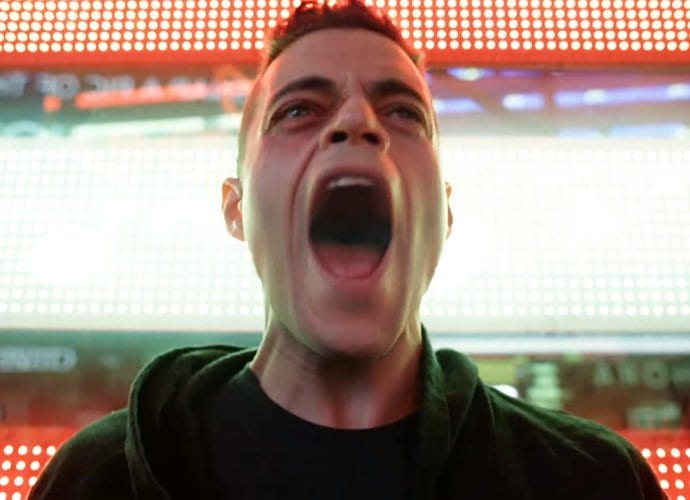 I wonder if Eliot will be able to maintain his sanity this season. Or if the weight of his actions will come crashing down upon him. Yes there’s a Fight Club vibe running strong through him, but at his core Eliot is a man who just wants to find his place in the world. I don’t know about you guys but I have some sympathy for him while watching the trailer and seeing the return of Mr. Robot. Eliot knows that he’s not real and what can that knowledge do to him. Is it possible to drive him further insane? Or could it lead him down a path where there’s no turning back? I’m not entirely sure to be honest with you, but I’m willing to see how everything unfolds. Mr. Robot has created such a diverse and deep universe that I’m looking very much forward to delving back into and dissecting what I see. Plus I think we can all use a healthy dose of paranoia from time to time. Why not have it come through the way of excellent television.

Mr. Robot airs Wednesday at 10 p.m. and my reviews will be up Thursday evening. Happy viewing!