Summer is almost over, which is quite the bummer, but with the end of summer comes the return of your television programs. To that, there is much rejoicing. Shows like Arrow, The Flash, This Is Us, and The Walking Dead will once again grace our television screens come October and life will sort of make sense again. By that time Game of Thrones and Rick and Morty will be living in the land of re-watches as we make room for new “holy crap” moments from the programs that return every year like a kid going back to school.

While there are a plethora of shows to fall in love with I would hate for you to forget, and/or miss the return of Mr. Robot. That’s right USA’s deeply dark, crafty, layered, haunting, thought provoking, visually captivating, paranoia provoking, socially relevant, brilliant show is returning for a third season and if the latest trailer is any indication it looks like things are going to be falling off the rails even further.

Season two of Mr. Robot was a lot of smoke and mirrors with a constant stream of misdirects aimed at keeping the audience as desheveled as the majority of its characters. Elliot spent the first half of the season in prison and ended the season with a bullet in the stomach, Darlene tried to lead F Society into Phase Two and ended up killing an Evil Corp higher up and pissing off the Dark Army who seem to be cleaning up the 5/9 mess, officer Dom has the whole group under surveillance as she’s waiting for the right moment to grab the crew, Angelea tried to be all corporate/badass only to realize that she’s not fooling anyone including the police, and Mr. Robot is still fighting for control of Elliot’s mind while also protecting him from harm. To say things are a bit complex would be an understatement.

There were some complaints about the pacing of season two that I understood but found to be a bit unwarranted. The story weaved was one filled with complex and intricate moving pieces that looked to convey the chaos within the group while also trying to encompass just what 5/9 accomplished on a global scale. Characters seemingly spun wheels as they searched for meaning post the biggest moment of their lives. At the end of the season all threads seemed to come together dispelling a tapestry of deceit, betrayal, and the all elusive Phase Two. If the trailer is any indication then season three is looking to pick up these threads and set them on fire. 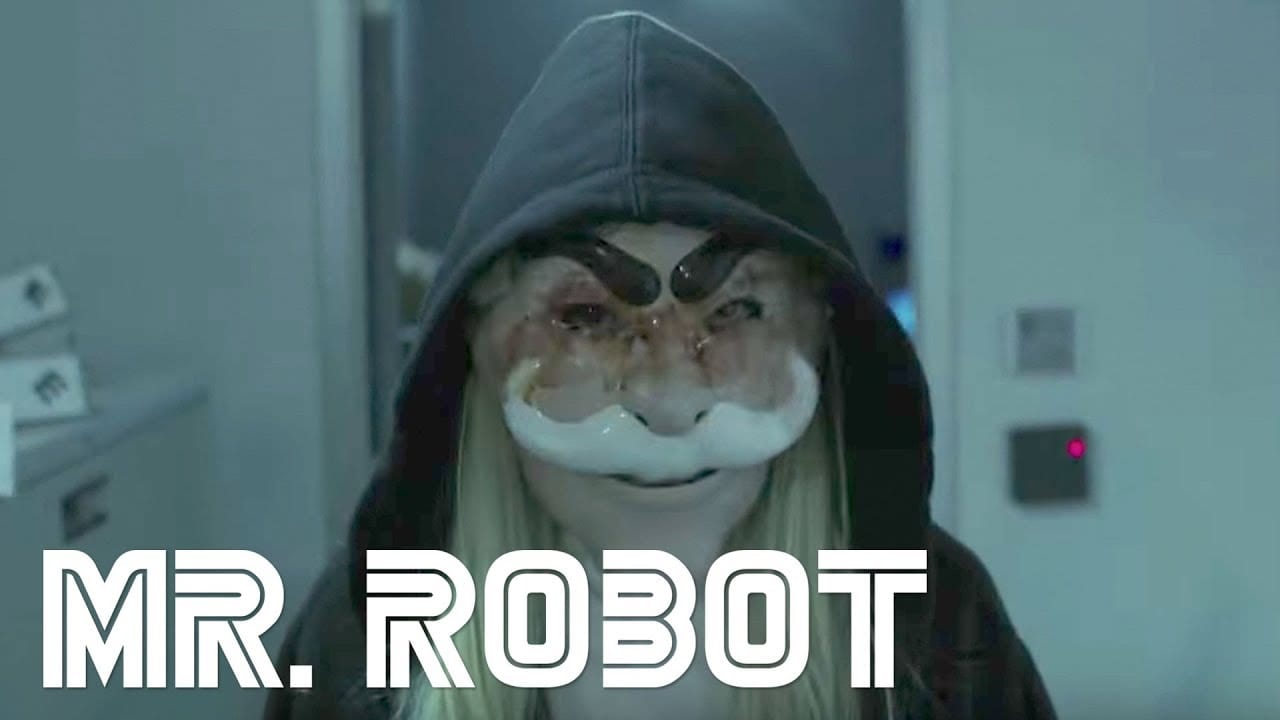 It’s quickly apparent that Elliot survived his gun shot (duh!) and Tyrell Wellick is starting to piece together that Elliot is two people. On top of that, it seems that Angela has ditched the corporate look to dive deeply into that F Society regime and I have to say that she is looking all types of haunting in that F Society mask. Darlene seems to have somehow escaped the grasp of the police and Dom but the Dark Army wants her all types of dead as she seems to be cracking under the pressure of being pursued. As for Mr. Robot… well, he seems to still be doing Mr. Robot type things as Phase Two still seems a go.

I don’t know about you Geeklings but I can’t wait for the return of Mr. Robot. Outside of Game of Thrones I haven’t had a show to truly break down layer after layer since Westworld. Plus I haven’t had a reason to be paranoid in awhile and I’m sure the return of the show will help with that. Mr. Robot is filled with excellent writing and characters that get under your skin in the best and worst ways. From a story telling perspective, it’s genius and you’ll be asking yourself how this show isn’t on HBO.

What do you think Geeklings? Are you excited for the return of Mr. Robot? Does this trailer capture the right mood/tension for season three? Are you happy to see Elliot back on his feet? What do you expect to see this season? Sound off in the comments below. If you’d like to talk more Mr. Robot with me you can find me on Twitter @iamgeek32. Until then, if you haven’t started watching you’ve got until October 11th to do so, and if you have watched, then you have until October 11th to re-watch. Be sure to take notes and get ready, season three sure looks like it’s coming out to melt faces.