Good news everyone (ooooooh that felt like a Futurama moment)! Mr. Robot has been renewed for a third season. Yaaaaaay! There was much rejoicing. And while it’s super exciting to know that this story will be continuing past season two there is still plenty of this season left to taken in, and from the looks of it things are just starting to heat up.

I suppose the natural question to this week’s episode would be, “how do you top Alf?” It seems like a legit question when one considers the fantastic Full House like opening from last week, but I think we’ve reached a point where we don’t need Alf in this story. As a matter of fact I would argue that we never needed Alf at all but his appearance felt oddly at home. While Mr. Robot tried to protect Elliot from the beating he was receiving at the hands of Ray’s thugs, he inadvertently bridged a gap between the two. Or maybe it was deliberate but I’m choosing to believe that Mr. Robot protected Elliot from pain like a father would, and not out of a need to take full control. Yes, I still believe that Mr. Robot wants that, of course he does it’s the wish of every split personality, but in displaying the fact that he cares he’s won Elliot over in a way that wasn’t possible before.

There is little doubt that Elliot knows that Mr. Robot is not his father. Yet… I wonder if in his vulnerable state if Elliot is truly able to tell the difference. That hug at the end of last week was gut wrenching and a moment that was clearly shared between father and son and not rational side of the mind and irrational side (you can choose who is which). Now just like that it seems that the two sides have a platform to start negotiating. Maybe a balance can be reached between the two, which would be the most beneficial, since their little war has been nothing but one stand still after another. One has to wonder on the sincerity of Mr. Robot here, and I believe it because he is just a projection of Elliot’s mind after all, and if he will use this re-established father role to take advantage of Elliot. 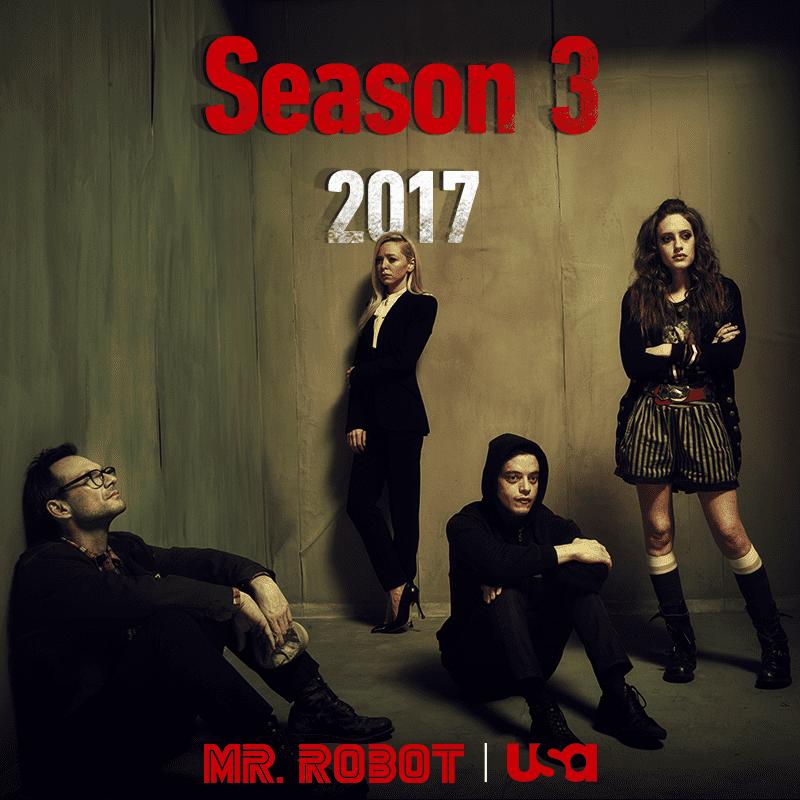 One of the things that’s been hanging over this season of Mr. Robot has been what happened to Elliot during those three days he can’t remember. We are now at the half way point of this season and still have no clue what went down immediately after the hack, but if this trailer is hinting like I think it might be, then we might finally start to get a full picture. The way this question has loomed over this season must mean that something large happened, that Mr. Robot/Elliot did something important that can further destroy Evil Corp and/or help F Society out of the jam they currently find themselves in. One thing’s for sure, Mr. Robot knows plenty and it’s about time to he started sharing. Maybe he could start off with the whereabouts of Tyrell Wellick because that question mark has gone on a little too long too. After last week’s opening I’m starting to believe that Mr. Robot helped hide Tyrell from the public eye, maybe even against his will (hence the trunk metaphor), but also made Tyrell the key to the next phase. If the two of them (one of them?) can escape Ray’s Basement of Doom one has to believe that getting Tyrell would be the next logical step of the plan.

Speaking of plans, Darlene had a pretty good one last week even though a lot of it hinged on the inexperience of Angela. The two of them have been friends forever and both find themselves in positions with their backs against the wall, and have to turn to each other to help problem solve. I get the desperateness of both here. Angela has just started to find her confidence and being implemented in the hack would do more than ruin her life, and Darlene knows the FBI is closing in on F Society and needs to wipe the trail before her and the merry band of hackers end up in jail. The only problem here is Detective Dom (what what) is back from her near death experience in Japan, and wants nothing more then to solve this case.  Now she has this pretty/fragile bird who was on a floor without proper clearance, and I think it’s safe to say that she can run circles over Angela. I’ll be curious to see how Angela is able to get herself out of this jam or maybe she’s not. The name of the episode is “Hand Shake” and is it possible that the hand shaking in question is an accord reached between Dom and Angela for full immunity? Just a theory but couldn’t you guys see Angela flipping on F Society?

There you have it Geeklings! Season Three is a go and tomorrow night looks to bring some answers to some of our season long questions. Sound off in the comments with your theories of where Tyrell Wellick could be or if Mr. Robot and Elliot can actually co-exist. Not to mention if you think that F Society is doomed now that Detective Dom has her sights set on Angela. The comments are all yours.