There is a beauty to the chaos that is the Mr. Robot universe. Last week’s premier displayed a world on the brink of tearing itself apart post the 5/9 hack. A New York City without power, looters, the cacophony of the Hacker Olympics den, all helped to paint an image of a world that was just waiting for a match to make it burn. That match would seemingly come in the form of a Stage Two attack orchestrated at destroying the physical records of Evil Corp thus destroying whatever was left of the financial market. Yet, behind all that, there was the promise of hope. Whether it was Elliot’s epic speech recognizing that himself and 5/9 weren’t the solution but part of the problem as he meticulously mapped out what the world would become in the wake of his greatest achievement. It’s Elliot’s understanding of this that makes his 180 impactful with that underlining current of hope. The idea of not just bringing the world back but recognizing the errors and building a stronger/better world. On paper, it sounds great but is it really something that can be implicated? On the flipside of Elliot’s thinking, you have Angela who believes that Stage Two is instrumental in changing the world, possibly all worlds, by tearing it down. Angela gives up her need for revenge over the company that killed her mother and trades it in for a train of thought that preaches that maybe none of it actually matters. That her mother’s death could be wiped out of existence through the aid of F Society and Whiterose. That time can be altered. While both trains of thought are conflicting they’re both filled with the idea of hope. 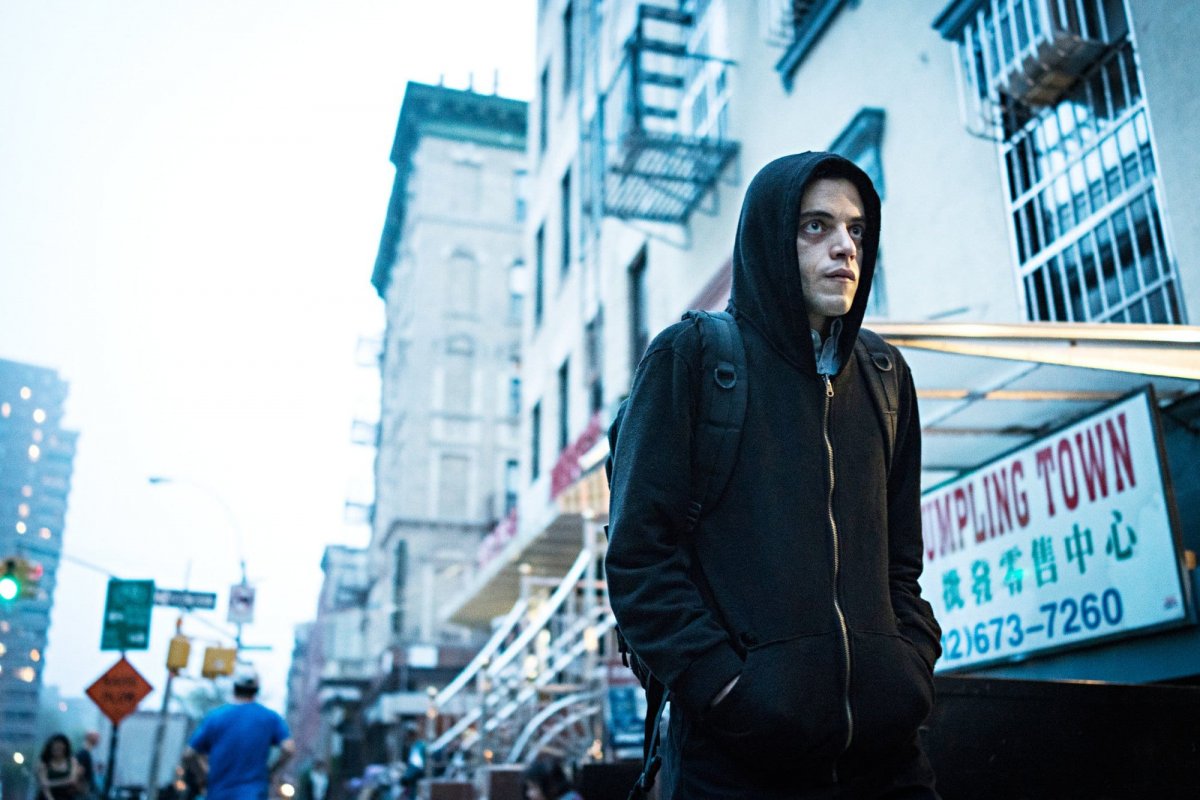 At the start of the episode, we get a glimpse of Elliot’s hope through his new position over at Evil Corp. Elliot believes the only way to fix what he’s done is to be right there in the lion’s den working day in and day out trying to repair the damage he’s committed. The opening montage shows Elliot working like everyone else, surrounding himself with people buried in their world of social media and emojis almost ignorant to the world burning around them, except with Elliot he’s not defeated by the grind. He’s walking with purpose. He has a plan that involves climbing the corporate ladder of approval and getting those who conflict him removed (or arrested), in the hopes of beefing up the security of Evil Corp. To build a wall that will protect the paper documents while giving him the opportunity to create something better. Except, rebuilding is slow. There are no instant results and through all of his heroism, Elliot is still broken. With the absence of Mr. Robot and Darlene, who has made some serious life choices, Elliot’s crippling loneliness comes back and comes back hard.

The fact that Elliot forgets his own birthday isn’t surprising as his entire world is pulled into so many different directions. This all falls into the argument of the perception of time on Mr. Robot as I suspect to Elliot time is more than a flat circle, but it helps to define just how far removed from the real world he is. Darlene was his anchor in a lot of ways but she’s gone now. Gone physically at the end, chased away in a masterfully orchestrated tracking shot by Mr. Robot, but gone emotionally as well. As I speculated, it seems that Darlene has indeed made a deal with the police and while she tries to protect her brother, to an extent, learning of his betrayal and work with Tyrell sends her over the edge. Forcing her to scornfully set up a tracker on his computer so the police can follow his movements. But in her fear, and I would argue shame, Darlene is sloppy and gets caught by Mr. Robot, and one of the things we’re learning about the Mr. Robot personality as he’s detached from Elliot is he’s kind of a monster.  There is true aggression and anger within this personality and a willingness to hurt others if necessary. Not only does Mr. Robot get physical with Darlene but also tries to impose his aggression upon Doctor Gordon especially when he slips with the personal info. To Mr. Robot, Darlene isn’t family and Doctor Gordon isn’t a friend, but forces trying to ruin his plans. A threat. I think Darlene recognizes this but her eff off/never contact me goodbye seems more directed to Elliot than Mr. Robot and that idea is heartbreaking. What is Elliot without his anchor? At least he got the dog from season one back. Yay? 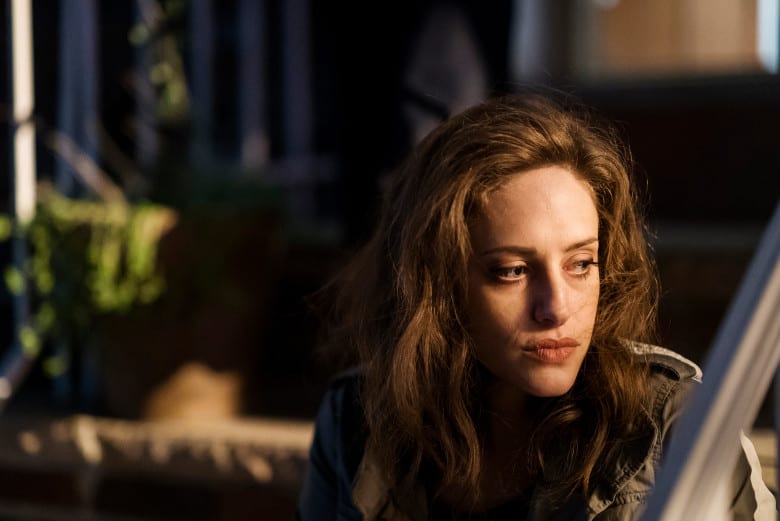 Yet Darlene’s sloppiness is enough to make Mr. Robot, and maybe Elliot, suspicious of why she was poking around his computer. Don’t forget that Elliot tends to be smarter than most of the other characters on the board and that’s true if he’s Mr. Robot as well. He is quickly able to put together a virus that allows him to trace whose tracking him and the episode ends with Elliot in Darlene’s protective custody apartment. The jig is up so to speak and it’s safe to say that that relationship is compromised. Is it possible for Elliot to emotionally recover from the fact that his sister, his only safe haven, is trying to sell him out to the cops? Will this lead to a spiraling that will allow Mr. Robot to seize full control? With that being said though, what do Dom and the police do now that they have Elliot literally in their grasp? Do they have enough to make a move or is it possible they try and get him to flip as well? Darlene’s betrayal opens a lot of possibilities in a show that seems to hint that each choice leads to a new parallel universe.

We can’t forget that even though Mr. Robot often hides beauty within its chaos it doesn’t negate the fact that there is actual chaos within the story. Look no further than how swiftly Joanna Wellick was taken off the board. I mean, holy crap. Sam Esmail provides another beautifully constructed tracking shot using Inxs as a backdrop to add to the mounting tension. The tension and song choice, almost at war with each other, sucker the viewer into thinking everything is safe, who gets hurt during an Inxs song? Yet… The man who helped Joanna clear her husband goes off the rails as he kills Joanna and then is shot himself as he’s filled with lust filled manipulation. While this scene was a bit shocking I couldn’t help but feel slightly disappointed. I spoke in the preview how I really didn’t understand the big arc for Joanna and it seems that it was as simple as clearing Tyrell’s name. Somehow I was expecting there to be more, considering how layered and confusing it was, but she’s gone now. She’s played her part and the board is cleared while her actions loom heavy.

Going along with the chaos is the war building between Whiterose and Philip Price, a war that could easily tear the world apart. No exaggeration. Whiterose refusing to persuade China to sign off on E Coin, a new form of global currency, negates the whole movement and has Price on the verge of a breakdown. It’s that breakdown that forces him to threaten Whiterose but as sly as Price is, he’s out of his depth here. Rose is leagues ahead of everyone and throws Angela’s alliance with the Dark Army in Price’s face just because he knew it would hurt. The truth is Stage Two is going to happen no matter what. Whiterose needs it for whatever she has planned for this time travel/parallel universe thing that’s going on. Price has already lost the war and he doesn’t have a clue.

There you have it Geeklings, Mr. Robot’s latest episode took one player out while severing the ties between a number of others. Elliot and Darlene, Mr. Robot and Darlene/Dr. Gordon, Angela and Price, Price and Whiterose are all kind of floating in the abyss at the moment. The atmospheric nature of the show doesn’t hide the fact that this universe is a powder keg waiting to go off but relishes in it. What did you guys think? Can Elliot function without Darlene? Were you disappointed to see Darlene sided with the cops? Were you surprised Joanna was killed off so suddenly? What do you think of Whiterose’s plan? Sound off in the comments below. If you’d like to talk more Mr. Robot you can find me on Twitter @iamgeek32. We’re only two episodes into season three and there’s plenty to discuss. Find me, friends. Let’s talk.