So far this season of Mr. Robot has hinted at possible time manipulation, had two of the people closest to Elliot turn traitor, and killed off another character almost as if it was an afterthought. On top of all that there’s  Bobby Cannavale’s mustache and all it’s glory. To say that season three of Mr. Robot has been firing on all cylinders might be an understatement at this point. There isn’t a show currently on our screens that asks more from its viewers than Mr. Robot unless of course, you account the emotional toll that This Is Us takes on its viewer. Mr. Robot isn’t afraid to give you the big picture while also providing a number of rabbit holes to get lost in, to the point where you begin to question just what the big picture is. At the center, Mr. Robot is a battle for sanity and slaying personal demons. Mixed in within all that are possible science fiction goodness, compelling characters, conspiracies, and the fight for civilization. Yeah, the scope of the show is pretty vast.

While season three has focused on the aftermath of Elliot’s gunshot wound and the stopping/continuing of Stage Two, there is still a number of story threads that are left unresolved. This is something that we’ve grown used to within this universe as most story threads do take some time to come together. Just look at last season’s major reveal that the FBI had been on to Elliot and F Society since the start. That was a long con that came together at the precise right moment to strike that holy crap reaction. One of the main story threads that has been hanging in the ether of this universe that Sam Esmail has created has been what happened to Tyrell Wellick. When we had saw him last he had helped Elliot implement the 5/9 hack, recorded a video as Mr. Robot, and then went into hiding because he was wanted for murder. We didn’t see him again until the end of season two where we weren’t really positive if Wellick was truly there or a construct of Elliot’s mind. All we knew was that he was prepping for Stage Two and eventually shot Elliot in the stomach because he was trying to hinder progress.

The season three premier helped eliminate any doubt that Wellick was a projection of Elliot’s mind when he interacted with Irving (played by Bobby Cannavale’s mustache) in order to clean up the mess that was made. No, not everyone on this show can be constructs of Elliot’s subconscious. God, that would be exhausting. Despite that though Tyrell has not given up on Stage Two or Elliot who he seems to worship as a God-like figure. When the premiere ended, Tyrell and Mr. Robot were on the same page looking to progress Stage Two (again) without Elliot’s knowledge. Yet, none of this answered the question… where the hell was Tyrell during the majority of season two? His wife was hatching all types of schemes to blackmail and murder and eventually clear her husband’s name, but he never showed. Not once. Even those cell phones she was receiving had nothing to do with him. When it comes to Tyrell Wellick we are still very much in the dark. 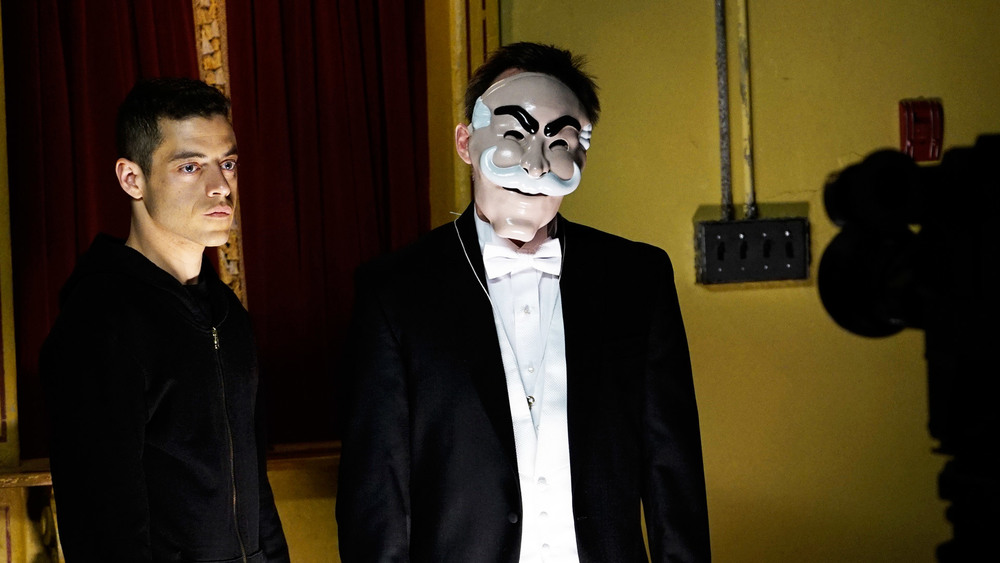 I think that ends tonight though with the newest episode of Mr. Robot slated to cover just what Tyrell was doing while he was off-screen. Yes, he was apparently setting up Stage Two for Elliot but there has to be more to it than that. Is there a Dark Army connection? It seemed that Irving and Wellick had some sort of rapport when they interacted in the premier. Perhaps they have some sort of working relationship? Was Tyrell paying attention to the crazy actions of his wife? And now that she’s suddenly dead, what does that mean for him and his mental state? Here is a man that tends to be obsessive and worship those he loves/admires. Will the death of his wife make him useless to Mr. Robot now or is it exactly what he needs to let go of everything and truly commit to the cause?

I don’t expect all these answers tonight, this is still Mr. Robot after all, but I am looking forward to learning just what Tyrell has been doing before we saw him get into a car with Elliot. What are his true motives here? Is he central to what comes next or just another pawn? What do you think Geeklings? Are you excited to finally get some light to where Tyrell Wellick’s been? What do you think the fall out from last episode is going to be? Sound off in the comments below with your best theories. As always if you’d like to talk more Mr. Robot with me then you can find me on Twitter @iamgeek32. I’ll see you all tomorrow with my episode review. Question everything!