Season three played us. Played us all. Everyone. Elliot. Mr. Robot. Angela. Darlene. Phillip Price. Dom. Tyrell. Us. Yeah, that’s right, I include us in this grouping because Elliot has made us a part of this show whether we asked for it or not. Last night’s episode, “eps3.5_kill-pr0cess.inc”, was a cumulation of a long con that’s been happening ever since the 5/9 Hack. Hell, I would argue this con was in place way before Tyrell and Elliot went forward with 5/9. All this time we’ve been made to believe that Mr. Robot is a game of chess being played out by Elliot and Mr. Robot for full control. We watched last year as the two battled it out, with an actual chess board, playing game after game only to result in draw after draw. One could not exist without the other meaning there was no way for Elliot or Mr. Robot to seize control. And for a while, we bought that. An accord was reached between the two as they tried to co-exist together. Then Elliot got shot and Mr. Robot was given the opportunity to function without Elliot which lead to the freedom for him to work with the Dark Army towards Stage Two. Elliot was none the wiser. Where Mr. Robot used to be there was nothing but glitch noises, and for a while both were free. Until the next chess match started.

Elliot learned that Mr. Robot was working behind his back, and actively tried to regain control before Stage Two went into motion. The E Corp building in New York being the spoils of the victor. Either it was going to explode or it wasn’t. This became the chess match between the two and as of last night, we finally had a victor… Whiterose.

Now, I’m aware that that sounds kind of weird. If the chess match was between Elliot and Mr. Robot how is it possible for Whiterose to be the winner? After last night the answer is kind of easy. Both Elliot and Mr. Robot are pawns on the board. Their chess match is insignificant in the great scheme of things. Whiterose can’t be bothered by the trivial nature of Elliot Alderson’s mental state, she’s out to change the world. As of last night, she did.

Since the end of last season, we have been made to believe that Stage Two was the destruction of the E Corp building in New York.  Before Elliot started working for E Corp, this building was supposed to house all of the financial records needed to recover from the 5/9 Hack. Now it’s empty. A symbol of everything F Society wished to take down but from a strategic point, there was nothing of substance in the building beside the employees. Elliot fought so hard to prevent the bombing of that building. He laid it all on the line. With his relationship with Darlene in tatters and Angela having drunk all the Dark Army Kool-Aid, Elliot was left with no one. I think the relationship between Darlene and Elliot can be saved or at the very least repaired, but as for Angela, I think she’s too far gone. She believes that everyone can be saved by Stage Two, even their dead parents, leaving Elliot to turn to the only person he has left… Mr. Robot.

As Elliot struggled to get Mr. Robot to listen to his pleas we watched as he made incredible progress in gaining control from Mr. Robot. Each time Elliot lost time he came back quicker and quicker, fighting harder and harder, bullying Mr. Robot into a corner where he had no choice but to listen. Mr. Robot, who was fighting so hard to promote a revolution that wasn’t even his anymore. None of the financial records were in the building. After the evacuation, there was no bomb discovered so this explosion would just be the deaths of countless E Corp employees. This wasn’t the revolution this was murder and finally, after Elliot beat the literal crap out of himself, Mr. Robot listened. He understood that he was being played by the Dark Army. 5/9 may have started as Elliot’s brainchild but it has transformed into something else since then, something ugly.

Elliot and Mr. Robot’s peace agreement should have seemed like a victory. The two finally working together with common interests, but as the ending of the episode unfolded it just rang hollow. Phones and televisions everywhere went crazy with the news that 71 different E Corp buildings had been bombed killing thousands. Elliot and Mr. Robot’s victory was nothing. With no files in the building at all they accomplished nothing when it came to stopping Stage Two. Whiterose used them and still got what she needed. One could even argue that Elliot’s re-direction of files got more people killed and it’ll be interesting to see if the show tackles this idea. It would be unfortunate for Elliot to blame himself here as it is clearly evident that Whiterose was planning to blow all of these buildings since the start.

You see, Stage Two was never about this building in New York or about Elliot. Whiterose has used him and now, in her words, he can die for the cause. Stage Two has always been about bringing E Corp and the rest of the world to its knees. Seizing control. Manipulating time and money. I firmly believe that Whiterose is tearing the world down so she can emerge as the hero, shaping this new world in her vision. Whether that means alternate timelines, parallel universes, or time travel is yet to be seen. Right now though she is the sole winner in this game of chess.

She played Angela based on a childhood fantasy, implanted by her dying mother, that the two could be rejoined somewhere down the line. For those of us who believe that the show is heading towards time travel, there were plenty of easter eggs in this episode as Angela was watching a Back to the Future cartoon and the cake for the living wake read “See you in another life” which sounded a lot like LOST to me… another show about time travel. Whiterose preyed on Angela’s belief that she could be reconnected with her mother and used her to help get Stage Two get where it needed to be. Angela was the inside connection in E Corp. Someone close to Price who could do things without being noticed because of his uncomfortable attraction to her.

Whiterose used Elliot/Mr. Robot/Darlene by taking their revolution, upholding it’s principals in Stage One and then openly used them to manipulate and change their vision without them even realizing it. And when they did notice, it was already too late. Their dream was gone. The world had been changed. The world hadn’t changed at all. In the wake of a destroyed superpower, they allowed another one to take its place.

Whiterose used Tyrell because she had too. He came attached to Elliot so she feed him lies about being reunited with his family, becoming a god, and used him to help facilitate aspects of Stage Two. And when it was over she sent her henchman, Irving to force Tyrell to give himself up. To continue to be a patsy for the Dark Army. It seems that Tyrell’s arrest will lead to a story that he’s been held captive by the Dark Army working for them against his will. I’m sure the note he burned had specific instructions as who Tyrell was supposed to implicate to keep all eyes off Whiterose. Even after all that sacrifice, Tyrell will never get a chance to see his family again. 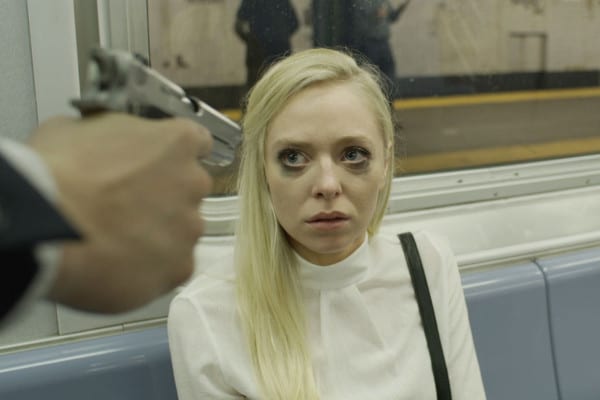 Whiterose used her connection in the FBI to steer super detective Dom away from any leads allowing them to clean up their messes before catching attention. Constantly staying one step ahead of everyone.

I do believe that the events of last night could be leading to a super team up among a number of characters. With Mr. Robot and Elliot now, seemingly, working together. With Dom maybe starting to understand that the FBI is working against her. With Darlene looking to mend fences and fix past errors. With Angela now understanding that everything has possibly been a lie… perhaps it’s time to fight back. Perhaps these four or five characters are what is needed to save the world from Whiterose. Perhaps… it’s time for a new revolution.

There you have it Geeklings, what did you think of last night’s episode? Were you shocked to learn that Stage Two was about the explosion of 71 other buildings? Were you impressed with the way Elliot was able to seize control from Mr. Robot? Where do we go from here? Can Whiterose be stopped? Sound off in the comments below. If you’d like to talk more Mr. Robot with me then you can find me on Twitter @iamgeek32. See you all next week. Question everything.