Think back to all the times you’ve heard a television show make the claim that their episode is “can’t miss” or it’ll leave “everyone talking”. Television is a business after all and of course, they want to attract viewers with sexy bylines thrown on to their trailers with the purpose of highlighting an episodes importance. Now think how many times these episodes have actually lived up to their own hype. There are a number of times where very basic episodes get slapped with the “can’t miss” monicker and once the episode finishes you can almost smell the false advertisement. That can be frustrating as a television viewer. There are times though where the episode delivers on the promise, when an episode lives up to the hype, and Wednesday night’s Mr. Robot was one of those times.

Dubbed as “can’t miss”, “everyone will be talking”, and “commercial free” it was easy to view the fifth episode of season three as some sort of gimmick to draw in viewers for the halfway mark of the season, but Mr. Robot aired something truly unique. We, the binge culture, love our shows without commercials. We can sit and watch forty-two minutes of a program without once seeing an ad for a soft drink and move effortlessly on to the next episode. DVRs have even made the idea of watching television shows with commercials almost obsolete. You all know you fast forward through them. In order for Mr. Robot to air an episode without interruptions, there had to be a reason, something to make it seem different than something you can watch on HBO or Netflix, and their reason was not only something unique but helped to make for compelling/tense storytelling. 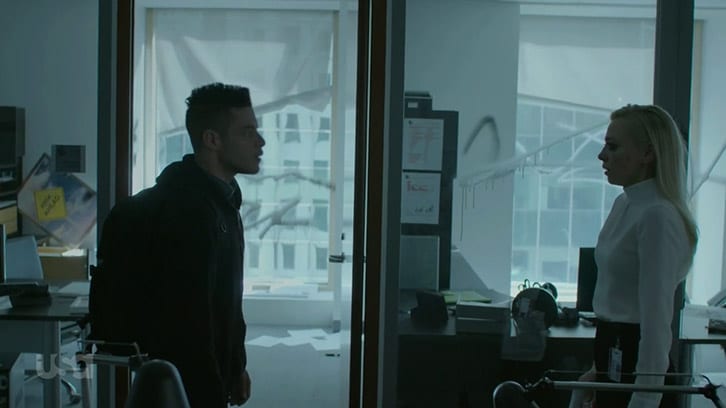 Presenting the entire episode as if it was one long tracking shot was a brilliant idea used to highlight the stress and importance of the events transpiring. The fact that the camera never broke away from the action, as it was fully immersed in the chaos that was transpiring both inside and outside the E Corp building, made it a central aspect to the storytelling. We were there the entire time. From Elliot stepping out of the elevator, to his attempts to elude security, to the riot outside, to Angela’s attempts to hack in the midst of a distraction gone wrong, we the audience were there for everything without a moment to catch our breath. We bounced from scenario to scenario fluidly and without pause racking the tension higher and higher. Yes, there’s no way that the episode was all filmed in one take, you can tell certain shots allowed for quick editing, but the illusion was there and the illusion was enough. Esmail used the technique as a way to propel the story opposed to using it as a gimmick.

Which is good considering a great deal of major events transpired throughout the episode. For starters, it seems at the season’s halfway point that everything is now out in the open. Elliot is fully aware that he’s been betrayed by both his sister and Angela, and it’s a crippling blow. Darlene found Elliot as he was expelled from the E Corp building, having been fired because of Angela, and confessed that she’s been working with the FBI. Here was a masterful scene that stressed how earth-shattering the news was to Elliot as the sounds of the almost riot become muted and all Elliot can focus on is the news that his sister is spewing. A new reality where she’s betrayed him for the FBI. It really helps to highlight the fact the importance of the betrayal and Elliot’s loss of perception. How nothing else matters in the moment but finding out that he’s alone. It’s not made much better when Darlene informs him that she saw Angela working with Mr. Robot. It’s a really tough two minutes for Elliot and as he’s processing it the Dark Army orchestrates a riot as a distraction to get him back into the building to set up a hack to further Stage Two because that’s what all this is about… the start of the long-promised Stage Two.

The episode does a great job of showing important storyline events without taking us out of the situation. For example, we learn about the U.N.’s Congo vote through a television in one of the elevators and it’s frequent reappearances strike as a doomsday clock. It seems that China’s annexation of the Congo has finally gone through which is something that seems essential to Whiterose’s plans. While we still are unsure why she needs the Congo one can bet it has something to do with her obsession with time. Can you say strong magnetic pull, anyone? This was a nice touch on a subplot that seems like it’s going to be important going forward. 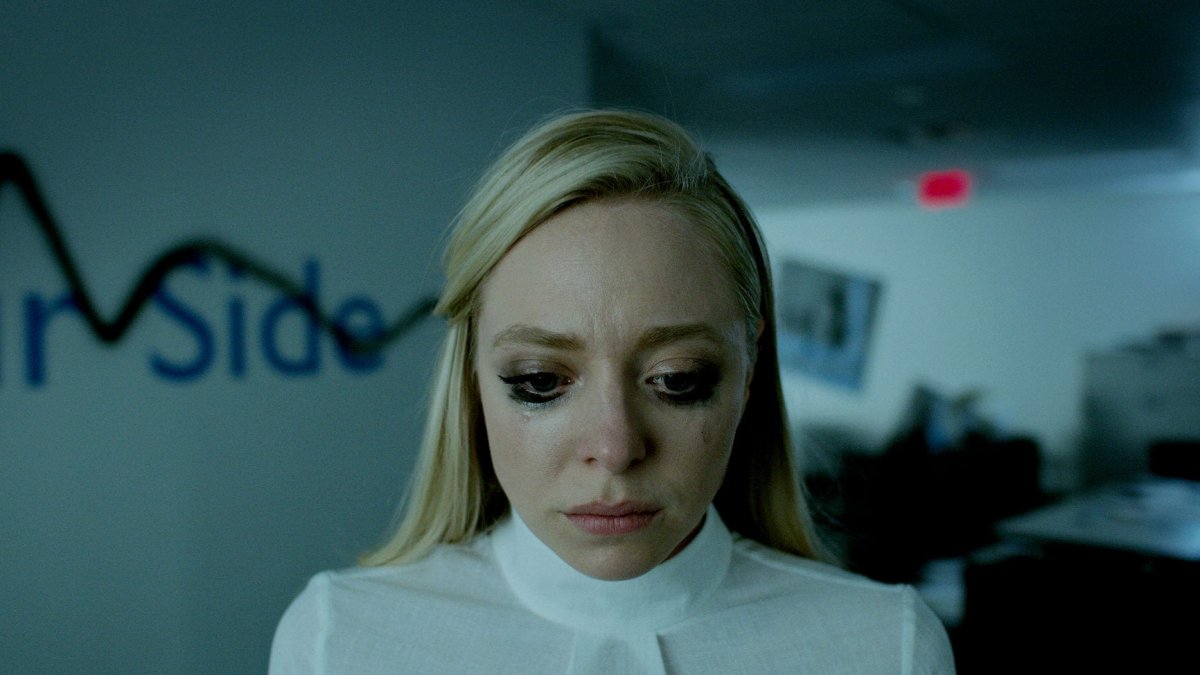 Once the riot starts we shift our perspective to Angela who is inside trying to play things cool and is sort of pulling it off. She is one of the Dark Army’s insiders, and her work along with Tyrell has helped orchestrate this very moment. Angela who has been toying with the dark side this season seemed a bit rattled at times with all the violence but kept her feet on the ground and showed that she was a loyal Dark Army soldier. Irving gives her the job of finding Elliot so he can hack into a back system in the mainframe, but Angela takes it upon herself to do the hack without Elliot. Carefully following the directions given, Angela stressfully goes step by step giving the impression that she pulled off what was needed. Irving didn’t seem happy about her going rogue, and skeptical that she did it right, and he seemed less than pleased that she was spotted by an E Corp employee. This could be Angela’s first moment of getting blood on her hands as she reluctantly gives up the name of the woman who spotted her. Chances are she got this woman killed but I wonder, at this point, if that will even register with Angela.

Speaking of Stage Two, yes it seems that the E Corp building is still set to explode. Elliot, in a last ditch to protect people, calls the building and informs them that there’s a bomb and they need to evacuate. He hangs up before we learn anything else. Angela also inquires to Irving about possible casualties in the explosion and he assures her that it’s being taken care of. Whether or not he’s speaking about Elliot’s phone call or just trying to appease Angela is yet to be seen. With the episode being centered around the E Corp building we still don’t know how the other aspects of Stage Two have played out.

Everything comes to a screeching halt with Angela heading towards an elevator to make an escape only to bump into Elliot who aggressively asks Angela if she needs to tell him something. It was at this moment that I remembered to breathe as my body registered the disappointment that the episode was over. Mr. Robot is now at the halfway mark of its third season and it seems that all the cards are on the table. As we shift into the back half of the season I’ll be curious to see where things go. Can Elliot forgive Angela or Darlene? Will Stage Two be a success? What does the annexation of the Congo really mean? I expect these questions to be the driving force for the rest of the season. 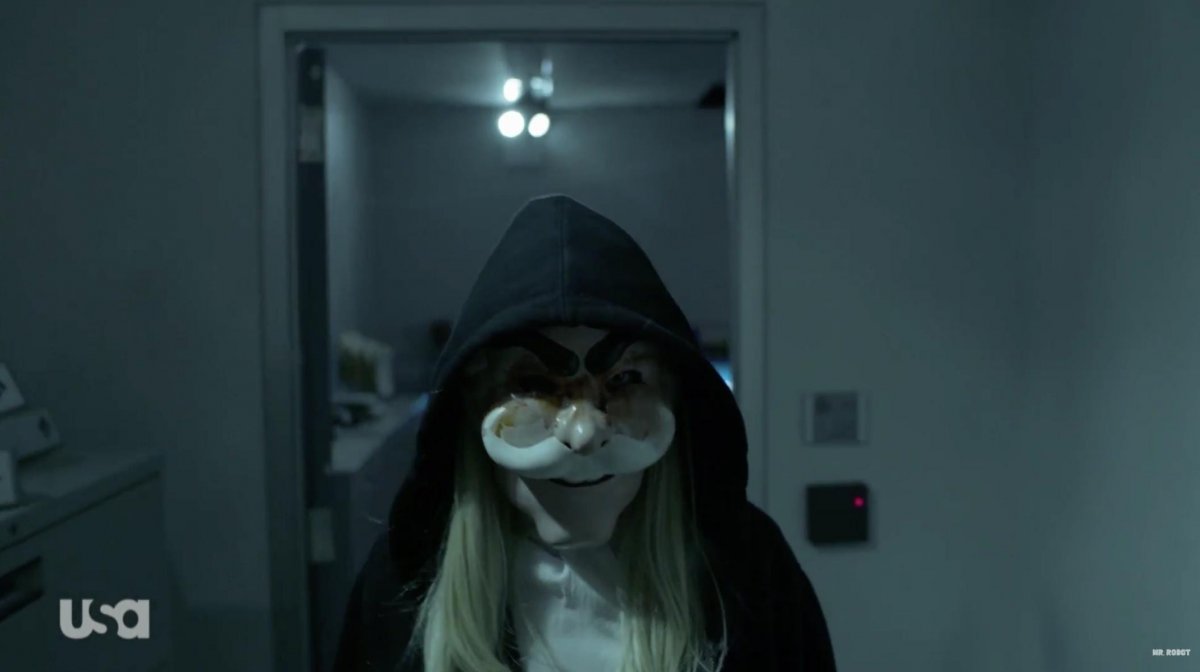 How about you guys? What did you think of the episode? Sound off in the comments below. If you’d like to talk more Mr. Robot with me, you can find me on Twitter @iamgeek32. See you all next week! Question everything.