Has everyone recovered from last week? One of the things I loved about last weeks episode, and I think I mentioned this in the review, is how that twist happened more or less in the middle of the season. That’s the type of big impact twist that most shows would save for a season finale, but Mr. Robot isn’t a typical show and it doesn’t want you to think that you’re figuring things out. Chances are we’re not.

Now where do we go from here? For starters getting Elliot out of jail seems like a likely solution, and if my theory about White Rose’s letter is correct, that should be happening sooner rather than later. What I found curious about this weeks trailer was how absent Elliot is from it, but we’ll circle back to that in a minute. If White Rose is responsible for getting Elliot out of jail then it’s safe to assume that he’s going to be right back in the thick of things and I’m not entirely sure that’s what he wants. Logically thinking would say that Elliot got himself arrested to prevent Mr. Robot from moving on to the next phase. Elliot said the hardest part of all this would be the days after the hack, and in order to prevent himself from doing more damage (?) Elliot put himself in a position where he wouldn’t be any where near a computer thus letting Darlene shoulder all the burden.

Clearly this isn’t fair to Darlene who is starting to come unhinged with all the pressure of leading F Society. I’m pulling for her but I think she acts too emotionally, which is an interesting contrast when compared to Elliot, and doesn’t have the personality to lead. Think of all her relationships that aren’t Elliot and Angela. She’s short, brass, and often times rude to those around her. Leading is out of her wheel house because Darlene doesn’t really like and/or get people. She’s trying so hard to further the playbook for F Society but Elliot didn’t leave behind any blueprints nor did he talk about what the next step would be. Hell, he sent the hack without the rest of them being present. Darlene is blowing in the wind right now and the whole structure of F Society is so fragile, especially when one considers Detective Dom as the big bad wolf just waiting for her moment.

A moment which probably has been expedited since Darlene decided to use Angela to help them infiltrate the FBI floor of Evil Corp. Granted her back was against the wall here but I stand by my belief that Angela was the wrong person for this. They were better off sending the CD guy to “deliver” a pizza that was loaded with an EMP. Angela was able to wriggle her way out of immediate trouble, but she made herself visible on Dom’s radar. I only say visible because Dom was keeping her on the outskirts waiting to pick a moment. Now with Angela being on the floor and the camera data base “conveniently” going out shortly there after, Dom is all but certain that Angela had something to do with this. Well, duh. 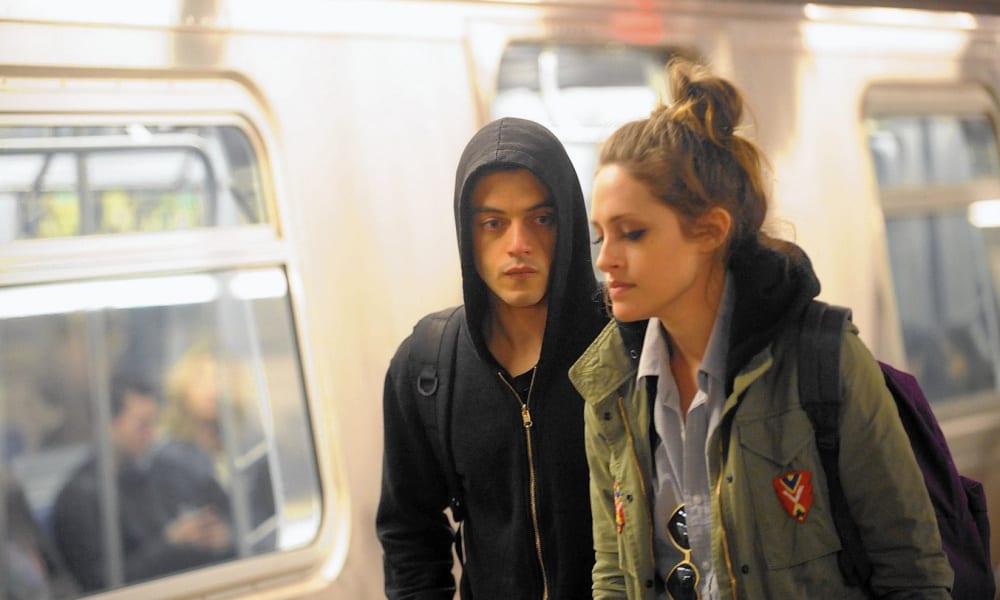 Angela isn’t smart enough for this type of life and now that the proverbial blood is in the water, one has to think that it’s only a matter of time before Dom is able to trace Angela back to F Society and their hidden Hacker Layer. Then what happens? I’m not sure if there is a second phase of this plan for F Society, other then trying to stay off the radar, and once they start becoming pursued you have to wonder if any of them will crack. Who on this hacker squad can be trusted not to talk? Outside of Darlene I don’t know if I trust any of them.

Trust is a funny word when referring to Mr. Robot. Our narrator constantly asks us to trust him yet goes out of his way to provide us a narrative that’s false. Now, I’m not saying that everything that’s happened this season is a lie because that would just be poor television and would beg the audience to lose not only trust but faith in the show. I believe everything that happened thus far has happened, but we’ve seen it through the delusional filter of Elliot because he’s our narrator. That’s one of the greatest aspects of this show, trying to decipher what is really happening and what Elliot’s mind is projecting to be happening. Mr. Robot is not a lazy viewers show and asks a lot of it’s audience, and that’s why last weeks twist is so impactful. I’m sure there are some of you who put it together (I was not one of them) but for the most part Mr. Robot wanted you to become so hooked into what Elliot was saying that we overlooked the obvious. And it worked for the most part. It’s like how most magicians make a living. I think the term is sleight of hand (which is also a Pearl Jam song for those curious… Pearl Jam is life).

This week starts a new level for this season. We are now, more evidently than ever, in a situation where we should be questioning just about everything Elliot tells us. But questioning and believing he’s lying are two totally different things. I believe that Elliot wasn’t lying but projecting a different version of a truth. Remember the old polygraph theory, it’s not a lie if you believe it. If anything Mr. Robot is now asking us to work harder now that the truth has been revealed, and with Elliot and Mr. Robot striking some sort of balance I think we’re going to need to be there for Elliot. Yes, it’s possible to be angry with him and it’s possible to mistrust him, but what we know about him and Mr. Robot has to make us fearful for what his life post jail will be. If Mr. Robot’s confession about killing Tyrell is a lie, and I believe it is, then that means he’s positioning himself for a chance to take control again. What better way to do that then to pray on Elliot’s need of a father figure. If anything, Elliot needs us now more than ever, but will we be there for him or turn on our backs? That’s what the show is asking us. How you answer it leaves it up to you.