Well… I think it’s safe to say that things escalated pretty quickly last week. For those of us who were hoping for this season to start moving forward we should probably be a little more cautious of what we ask for or Mr. Robot is going to turn the volume up to eleven. I have to say that last week was the best episode of the season and was the first episode that had the same feel in greatness as season one. I’m not saying that this season has been bad but there was just something natural about seeing Elliot behind a keyboard again doing what he does best. On top of that last week had so many call backs to season one that it couldn’t help but feel a bit nostalgic. Everything from Elliot recalling his hacker vigilante past (you know when you’re hacker and you get bored and  it becomes time to take down the bad guys) to Angela’s involvement (including her talks with Elliot and her idiot ex-boyfriend) to Ray being revealed to be a not so nice dude. Which is like saying Gargamel just needed a hug… did he? Could that have changed everything? Sometimes I get distracted and insert random Smurf references. That’s how I get down.

Speaking of Ray, daaaaaamn, I did not see that coming. As you recall I suspected him of being something darker from the start (see my previews/reviews for proof to validate this brag) but this was not what I had anticipated. Selling illegal arms, drugs, and people is a whole different level of despicable and I loved watching Elliot wrestle with his knowledge. Ultimately it lead to him getting a massive beat down but it was a reminder that the Elliot from season one, before he was corrupted by Mr. Robot, was still there somewhere buried underneath the paranoia. I’ll be interested to see how Elliot responds to the beat down this week. Clearly he knows too much and Ray isn’t just going to let him ride off into the sunset,

“Hey man, I appreciate your business model, but I’d prefer not to be involved in this line of work” “

Elliot that’s cool. Thank you for your honesty.” *hug*

I don’t really see it playing off like that. More like blame you’re dead. Elliot is going to have to play this one carefully if he’s going to get himself free. I think this is where you turn to Mr. Robot. You kind of have to right? He’s the more confident and assured member of Elliot’s brain so maybe he’ll have a way to get out of this jam. 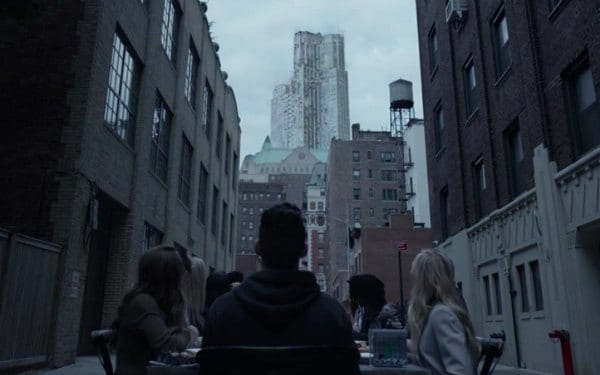 Angela was approached about helping hack Evil Corp, and despite the wishes of Elliot, she agreed to help out. It doesn’t help that her ex-boyfriend has been talking to the FBI and she could be implicated in the hack. It would be real easy to figure out that Angela was acting out against her cheating ex-boyfriend and used his computer terminal in an attempt to make it look like he uploaded a virus into their office for revenge (phew, that is a long sentence). I like how the stories converged last week but I do not trust Angela to pull this off. I’m glad she’s listening to self help tapes and feels more confident and assertive but there is just too much at stake to trust someone with no experience in this type of thing. Yes I understand the need of F Society to wipe Evil Corps records, but this seems like quite the gamble.

One of the things missing from this weeks trailer but was a huge part of last weeks episode would be Detective Dom and her crazy-ass-out-of-no-where shoot out. First of all the scene started with a tracking shot, and if you don’t know this about me by now, I love tracking shots! Instantly the show had my attention and then boom  people started dying. I love how the episode left Dom’s fate up in the air, although we know that our badass, unorthodox detective ain’t going any where, to help add to the tension of the scene. It seems that White Rose is fearing the FBI involvement and might be acting out a little rashly. The scene between Rose and Dom last week was awesome and it felt that maybe Dom had touched on the more vulnerable side of Rose. Which of course would rattle our underground Dark Army leader, but to act out so rashly seems like a bit much for her. It’ll be obvious that the attack gets pegged on the Dark Army but it’s clear that Dom suspects something about Rose (like how she doesn’t have a sister) and will most likely go at this hard. I mean, if she survives. Which she will because she’s awesome and awesome characters always survive (yes, I am clearly ignoring the existence of Game of Thrones because not everyone is a monster like George RR Martin. They can’t be. My heart won’t allow it).

There you have it Geeklings. What do you expect from this week’s episode? Were you happy with the return to form? Is Elliot effed? Is Dom dead? Let loose in the comments. See you all Thursday with the review.