Last weeks season premiere of Mr. Robot helped remind us that the show is on a whole different level then most things out there right now. It was also followed by six Emmy nominations, all of which were very well deserved. The only thing the premiere didn’t do was progress the story very much. Which like I said in my review, isn’t necessarily a bad thing, as it gave as a tremendous character study of Eliot as well as showing the ripple effects the hack had on some of our other key characters.

I expect that to change going into this week as last week ended with Eliot on one end of the phone and Tyrell Wellick on the other. Mr. Robot has been taking over when Eliot thinks he’s been sleeping and now we have to start wondering how long has Mr. Robot been manipulating Eliot since he tried to compose his life. This show presents the idea that everything we’re seeing could be a lie, and why I don’t think all of it is, some of it is definitely the warped perception of Eliot. Are the things he’s seeing actually there or are they things that Mr. Robot wants him to see? I love the layers to this show and how we shouldn’t trust anything. We have a narrator who might not even trust us! After last week he feels like we let him down… that’s trippy as hell.

Where’s Tyrell Wellick been hiding? Much like Eliot, we don’t know, but he has been trying to get in touch with his wife (via secret music box cell phones) and answered the phone when Mr. Robot called. Will this episode start to fill in the gaps of what happened to Eliot and Tyrell during those three days after the hack? One would imagine that there won’t be much of a slow burn on that story line, as the season isn’t very long, but again this becomes a situation of what can we believe? How do we know that Tyrell and Mr. Robot aren’t working together to hide things from Eliot. See what I mean?! This makes for great, literary television. Head and shoulders above most of the other things on our screens right now. 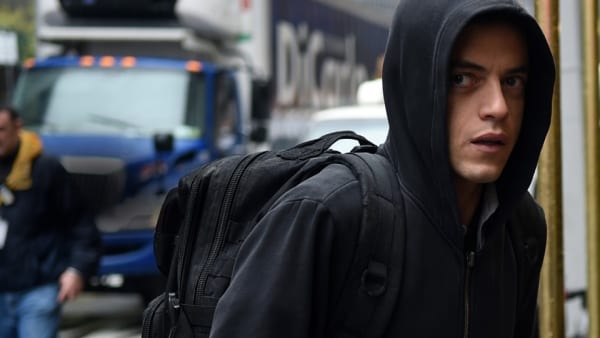 Elsewhere Angela seems to be going down a dark cooperate road but still is working on building that self confidence/self worth. If you asked me at the end of last season if she could survive working for Evil Corp the answer would have be an easy no, but after last week I’m starting to think that it could be possible. That glow or innocence that was present in season one is no longer there (that kind of happens when you see a man shoot himself ten feet in front of you) and we are looking at an Angela who might have finally found her niche in the world. It’ll be interesting to see if she becomes the face of the opposition for Eliot and Darlene as the season progresses.

Speaking of Darlene she is completely unsatisfied with the results of the hack.  Knowing that it was only the first shot in what should be a long war, Darlene is looking for more and found some of it last week when she had one of Evil Corps top executives burn $5.9 million dollars while wearing an F Society mask. One has to think that these little attacks (because $5.9 million is little) won’t be enough and at some point F Society will be thinking of something to out do the hack. Is Darlene the right person to lead them though? As a matter of fact, where are the other members of F Society? I’ll be curious to see how long Darlene can be their leader.

There you have it Geeklings. Episode two of Mr. Robot will grace your screens tomorrow night at 10 p.m. If you have any theories or thoughts the comments belong to you. Be sure to stay paranoid and question everything!