After last weeks stellar Elliot-less episode it looks like everyone’s favorite delusional narrator is returning to the fold fresh out of prison this week. You know, that place he’s been the entire season but failed to mention to us. Maybe we’ll start to finally get some answers about that, but knowing Mr. Robot I wouldn’t expect those answers immediately.

Ever since the big twist I’ve been trying to figure out what could possibly have landed Elliot in jail. There’s no way he confessed to 5/9 because super detective and all around awesome character, Dom is still on the hunt for that answer. I wouldn’t say that I’m rooting against Elliot and F Society but I can’t help but cheer Dom on, and I’m anxiously waiting for her to piece things together and discover that Tyrell is actually a beard and Elliot is the big fish here. I’d actually be curious to see the two of them pair off against each other, but it doesn’t help answer our question.

I think the logical answer is Elliot made himself a fake profile and submitted it to the police. He has a whole binder full of discs containing the secrets of some really terrible people. Whose to say that Elliot didn’t attach his name to one of these crimes so he could be put away for a bit. While this seems like the most logical answer, and most likely the correct one, I’m still holding on to the possibility that Elliot turned himself in for the prison break. The only problem with this though is there’s no way Dom wouldn’t have interrogated him about it. A hacker goes to jail during the 5/9 time frame? You best believe home girl would have been all over it. Final answer, made up profile.

Now here is where things get interesting because we’re lead to believe that Whiterose is instrumental in the release of Elliot (what did that letter say?), but we also know that Whiterose pretty much controls the Dark Army. That same Dark Army that seems to be hunting down F Society (#wheresmobley). This is where my theory train starts to go a bit off the tracks. Mr. Robot has made it seem that the Dark Army wants F Society dead, but there has been no evidence to back this up. In fact the only F Society member to end up dead was Romero and I’m starting to believe that’s the person Mr. Robot killed not Tyrell. Could the Dark Army actually be gathering F Society to use in the aiding of Elliot for phase two of the plan? Think about it. Elliot will owe Whiterose a favor for busting him out of jail, a favor that he’s going to be reluctant to grant. Knowing that he’ll already be combative what purpose does it serve by killing his hacker team, a team where one of the members is his sister? None. It would be much easier to bring them all together and threaten to kill them if they don’t cooperate. 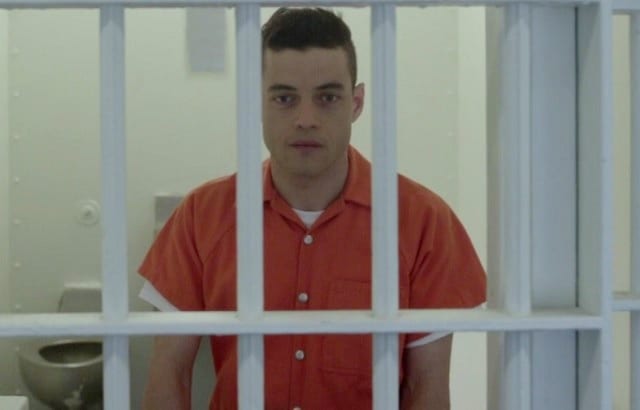 There’s a really good chance the Dark Army is super pissed with F Society because nothing has happened since 5/9. Granted this could all be part of Whiterose’s plan but F Society really has been floundering since Elliot went to jail. Being super pissed with a group and killing them are two different things. The Dark Army owns the internet and has ways of getting to each one of these members no problem. Their deaths would seem rather easy for the super hacker group. It’s not like F Society has fully dropped off the face of the earth. Hello, FBI leaked audio. So here’s the question, why go through all the trouble of having Cisco (#notthatcisco) watch Darlene if your just going to kill her. F Society is part of a bigger puzzle here and now that the team is “breaking up” they become easier targets to grab. Chances are all of them will end up in a new Hack Shack together reunited with Elliot, and that’s when phase two will begin. Right on time for Whiterose. Just don’t ask me what phase two could be. Well, if I was going to make a guess I would say that it has something to do with all this e-coin being used since the market crash.

Elsewhere the head of Evil Corp is looking to make his presence felt, finally. Is it me or has everyone been waiting for this guy to go super evil? He’s one of those corporate super villains always dancing on the edge of being a full fledged baddie but if this trailer is any indication he might be calling down the thunder soon. What does this mean for Angela. We already know that Detective Badass Dom has been watching her since the start of the season, and since she over played her hand at Evil Corp she’s kind of hanging out in the background eating shrimp. Not to mention there was the birthday rejection for Mr. Evil Corp… I’m willing to bet that Angela is going to find herself backed into a corner I don’t think she could get out of.

What do you think Geeklings? Is the Dark Army out to kill F Society or is there something else going on here? What will Elliot be like once he’s freed from jail? He went in there hoping to hide out and now that he’s being forced out what will that do to his mental stability? The comments are yours for the commenting. See everyone Thursday with the episode review. Happy viewing!

Images and Trailer from USA