Some films and television are made for that reason – so that the public can easily relate to the heroic characters and the underdogs as well. There are stories about life and love, overcoming adversity and how important it is to embrace yourself. There are also stories about hardships and heartache, about the fight between good and evil, and about how sometimes – unfortunately – bad prevails.

Other entertainment, however, draws you in without having a bright and flashing sign that shows you the purpose. There are series’ and films that seem to be just for laughs, or even for a fright, that end up being some of the most relatable things you’ll find yourselves watching. Sometimes, we don’t even recognize that we’ve made a connection with the film or the show until something happens and suddenly, it all makes sense.

One of those shows is The Walking Dead. Upon first glance, it’s a show about a zombie apocalypse. Upon further investigation – it’s a show about life, heart, survival, and family. You want these characters to make it through the impossible, you want them to win, you want them to believe in life even in a world surrounded by the undead. You want those things because you see yourself in the series. You may be a Glenn or a Maggie, a Daryl or a Rick, a Sasha or a Jesus, or even a Negan or a Dwight. You see yourself and the ones you love in those characters, it makes it more real.

Since the season is on hiatus, we’ve been rewatching old episodes and finding some of the most motivating quotes and pieces of conversation.  Since it’s a Monday, and we’ve just said goodbye to the weekend, we thought – what better time to put some of them together and start our week off the right way.

7. ‘I didn’t turn away. I kept listening to the news so I could do what I could to help. I’m not giving up.’

3. ‘Don’t worry about what’s gone wrong, figure out how to make this go right.’

1. ‘The world we know is gone, but keeping our humanity? That’s a choice.’ 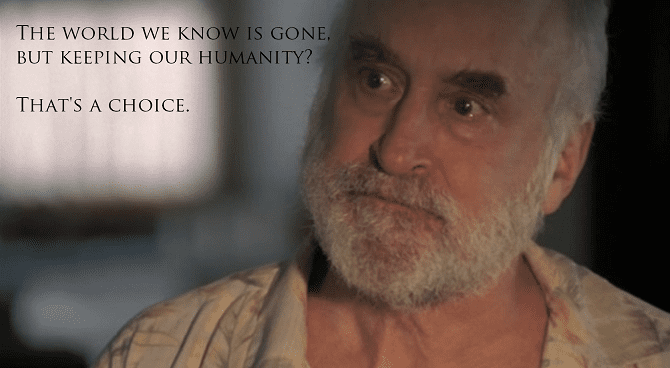 We may not be fighting zombies and some of those quotes are a bit humbling – but in a lot of ways, we’re all struggling with things that threaten to tear us apart in our own ways too. It’s nice to be such big fans of a show that puts into perspective the realness of human emotion.

Did we include your favorite TWD quote? Let us know.