New year, new games! Also, a strong possibility of their being an official announcement about the next generation of consoles – a belief stirred by the recent rumors of the new Xbox’s codename. But alas, we must bide our time until then. Thankfully there will be no shortage of AAA games to keep us occupied while we wait!

The Most Anticipated Video Game Releases of January 2019 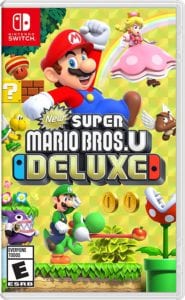 I know, I know. People say they are fed up with these remasters and argue that more attention should be paid to creating new franchises, rather than re-purposing older games. But you know what? I don’t agree. Especially in this case. Many people missed out on this delightful game due to the Nintendo Wii U basically, well, bombing. I’ll be the first to admit that I bought a Wii U, played Wind Waker HD and Mario Kart 8 for a week or two, and then left the console to collect dust until I eventually sold it. But the Wii U’s unfortunate failure says little about the quality of the games that were released during its short-lived existence. I’m glad that they are allowing these games a chance to shine again, as they were practically robbed of that opportunity on the previous console. Plus, this version also includes the Luigi levels, which is essentially the hard version of the original game! But hey Nintendo, while you’re at it, would you mind making an HD Remastered double pack of Super Mario Galaxy and Super Mario Galaxy 2? Thanks!

Yes, it’s another re-release, but in this case, it is the definitive edition of a great RPG that many did not get the chance to experience. This release is in celebration of the game’s tenth anniversary and includes a full HD update, all DLC, updated music and new bosses. I don’t have much else to say about this game, as I never had the chance to experience it. Hopefully that will change soon!

Ok, yes, yet ANOTHER remake. But come on, who doesn’t love Onimusha? Onimusha was Playstation’s flagship game series for many years, spawning multiple sequels. I have fond memories of my days spent with this game and have often wished I could play it again without having to purchase a PS2. Thankfully someone, somewhere, heard the fan’s cries and decided to remaster this gem. If you haven’t played any of the Onimusha games before, think of them as a samurai version of Resident Evil; Pre-rendered backgrounds with a samurai storyline complete with horror elements. And yes, it is as great as it sounds. Well, at least my nostalgia is convinced it’s still great. I suppose we’ll see if it continues to hold up once I play through the remastered version!

Now, I’m not a huge fan of these air combat games, but obviously they are quite popular as made apparent by this being the seventh entry in this series. Ace Combat 7 will feature a new graphics engine capable of bringing to life war planes with details not possible in previous iterations, while also promising to feature the largest and fastest paced air battles in the series over 20-year history.

Ever since the original Resident Evil was remade on the Gamecube fans of the series have begged for Resident Evil 2 to be given the same treatment. We waited patiently as Resident Evil was again remastered for release on current consoles and as Resident Evil 4 was re-released and updated for about the 25th time (give or take). Thankfully our patience has paid off as Resident Evil 2, arguably the best game in series, has finally been given a full-fledged make over that not only maintains the spirit of the original, but seems to have vastly improved upon it’s premise with updated game play, graphics and an expanded story line. I can’t wait to be scared all over again.

The 12-year wait is almost over! Most fans had become firmly convinced that there would never be an end to Sora’s story, and who would blame them? Very little news had been released about the long-awaited sequel in years, until these past six months finally hit us with a flurry of screen shots, trailers and story information. While some of us may still believe that this is just an early April Fools joke and the game will be yanked away last minute while Square Enix laughs at us, most have accepted that the game is, indeed, on it’s way.

What games are you looking forward to playing in January? Is there any new release that I forgot? Do you support remasters? Let us know in the comments below!