Mortal Kombat fans rejoice! And no, I don’t mean the fighter-genre enthusiasts. I mean the die hard Mortal Kombat fans; the people that cherish and appreciate the lore and characters that envelope the Mortal Kombat universe. The storylines that the man himself, Ed Boon, laid out for us. Well Ed Boon isn’t done with us yet. In a tweet from the other day, Boon shared news that the movie reboot was still being developed and now found its director in…Simon McQuoid?

While this name may not seem familiar to any of you, as it certainly didn’t for me, that’s because this will be his first ever feature-length film. However, we’re all familiar with his work. McQuoid is an Australian filmmaker who’s a big deal in the commercial-director business, having done commercials for Playstation, Halo, and most recently that Star Wars Duracell commercial. So yeah…we know him.

All classic MK fans can remember the original 90’s Mortal Kombat film, while also remembering the cringe-inducing sequel that it spawned. The sequel that essentially murdered all Mortal Kombat-related film projects for the next decade. All until Warner Bros Digital released the Mortal Kombat short film Mortal Kombat: Rebirth and webseries Mortal Kombat: Legacy. Both projects being deliciously well done; I still have Legacy on Blu-Ray to this day, even got to meet the legendary martial artist who portrays Jax, Michael Jai White. 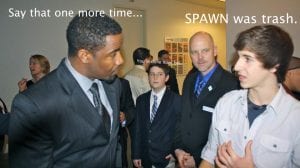 Whatever this new movie has in store for us, we can trust James Wan as the film’s producer to lead it on the right path; and trust Simon McQuoid to use his commercial-expertise to make Ed Boon lots of money, because let’s be real, this movie is just one big commercial for the franchise to sell more video games and merchandise.

Hopefully this reboot can respect the franchise such as Kevin Tancharoen’s Rebirth and Legacy projects did. To prepare for the next live-action installment in the franchise, let’s look back at Tancharoen’s masterpiece of a short-film; starring one of my personal favorite actors/stuntmen, Matt Mullins, portraying one of my favorite MK characters.