The actress posted to her Instagram, teasing her upcoming appearance in the MCU. “Can’t wait for y’all to meet her,” Gomez wrote. 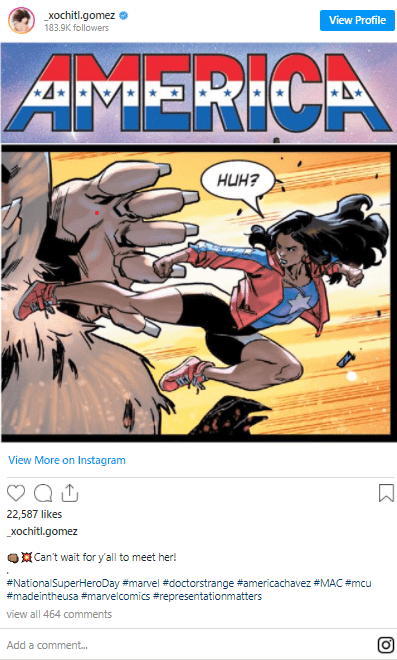 Julian Hillard, the MCU’s Billy Maximoff, reacted to the post leading many to speculate that he could perhaps make an appearance as well. It’s certainly possible, as this is the next place we’ll see Wanda since WandaVision ended.

Elizabeth Olsen discussed her upcoming Doctor Strange role, “I didn’t know my part in Doctor Strange until right before we got back to filming during the pandemic,” Olsen recently told Variety. “We had two months left, and we’d filmed the majority of our show already. Really, I knew nothing until that moment when they pitched [Doctor Strange 2] to me verbally. So I tried, as much as I could, almost less so to have it affect WandaVision as have WandaVision affect it. I think that’s really been where the connection is. It’s almost like we’re trying to make sure that everything is honoring what we did [on the show].

It looks like this new phase of the MCU is going to be wild! With the introduction of the Multiverse it means absolutely everything and anything is on the table. It could be insane, especially with the Spider-Man rumors. A Spidey film with all the live-action Spider-Men ever? Sign me up!