Stranger Things star Millie Bobby Brown has already proven that she is an amazing actress, but did you know she can rap, too? 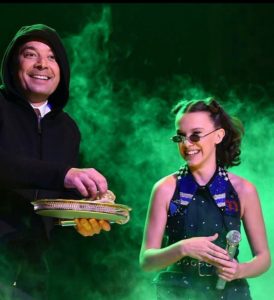 Brown first debuted her rap skills on The Tonight Show Starring Jimmy Fallon last year. Last night Brown showed off her skills again, this time by rapping a recap of season 1 of her hit Netflix show.

“All I need is my Eggo waffles, I’m in love with those/ What I’m left with when I use my powers is a bloody nose.”

If you thought Brown’s work in Stranger Things was awesome, take a look at her rap in the video below.

Netflix is Bringing You a ‘Stranger Things’ Aftershow