Guess who will soon be the next face of a new Calvin Klein Collection? Eleven herself, Millie Bobby Brown!

The Stranger Things actress, who is only 12, was featured in an Instagram post by the Calvin Klein brand, wearing tuxedo trousers and a multi-colored beaded top. She shared the post on her own IG account stating, “I am so honored to be a part of this.” 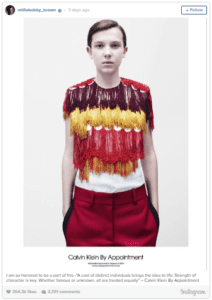 The new line is called ‘Calvin Klein by Appointment.’ It is a made-to-wear collection and will be available by appointment as of April 1st. Hence the name. Brown will be modeling the collection along with fellow actress Abbey Lee and model Natalie Westling.

Stranger Things returns to Netflix for season 2 in  2017 with a release date yet to be determined.