There have been some seriously hilarious antics happening on Twitter between the Winchesters lately.  Former Supernatural castmates Jeffrey Dean Morgan and Jensen Ackles recently exchanged some tweets which had fans of the show and of The Walking Dead cracking up.

The tweets poked fun at the fact that Jeffrey Dean Morgan, formerly John Winchester on the CW’s Supernatural, is now rocking his new role as the most terrifying villain to hit The Walking Dead universe, Negan.  It wasn’t long until The Walking Dead cast also got involved, specifically Michael Cudlitz, formerly Abraham Ford who was one of two characters to meet Lucille, Negan’s barbed-wire bat, in the Season 7 Premiere.

Things have been peaceful for the past couple of weeks however, today, Cudlitz rekindled the playful “feud” with a tweet showing himself sitting in Dean’s (Ackles’ character on Supernatural) signature black Impala, a car passed down to him by his father, John Winchester (Morgan) on the show Supernatural.  Check out the tweet below. 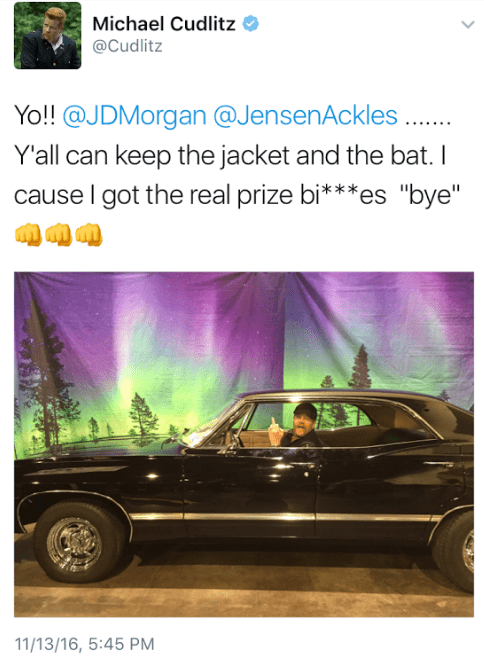 Yo!! @JDMorgan @JensenAckles ……. Y'all can keep the jacket and the bat. I cause I got the real prize bi***es "bye" 👊👊👊 pic.twitter.com/HMfgNeZbeF

It may have seemed like Cudlitz had the last laugh (or at least, at the start of writing this article, he did) until Morgan swiftly replied with a zinger that certainly stings in our still unhealed wounds after The Walking Dead‘s Season 7 premiere:

@Cudlitz Shit you're dead to me…. AGAIN. @JensenAckles https://t.co/xTLM0r4pPQ

We can’t wait to see what else comes from TWD/SPN Twitter Saga!  All we can say is, thank goodness Jeffrey Dean Morgan finally caved and signed up for a twitter account!

Home » Fandom » Michael Cudlitz Gets The Last Laugh in ‘The Walking Dead’ And ‘Supernatural’ Twitter “Feud”…. Or Did He?