DRIVE is a comic book based on James Sallis’ novel and film of the same name. It follows a young man who escapes to L.A. to do one thing, drive. That’s all he does, and he’s the best. Whether on studio lots as a stunt driver or in high-speed chases evading the cops, there’s no one better behind the wheel. That kind of expertise comes with a hefty price tag and allows for a strict set of principles. 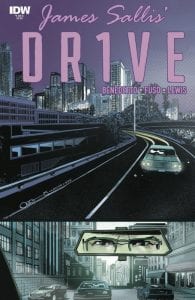 Michael Benedetto is a writer and editor living in Seattle. DRIVE was his first comic book series, and he’s currently working on scripting William Gibson’s Archangel with art by Butch Guice and adapting Joe Hill’s Tales from the Darkside series with art by Locke & Key co-creator Gabriel Rodriguez.

I had the pleasure of interviewing both Michael and Antonio about their career and pushing the pedal to the metal with their book Drive!

MG: Hello gentlemen! What or who inspired you to become a writer and artist?

Michael Benedetto: Reading a lot of comic books and watching more than my fair share of television as a kid sparked my obsession with storytelling, and that gave me a solid push toward writing. I was an English major in college, and like most people who decide to venture down that road, I feel like I have a wide variety of influences smashing together behind my eyes. Always read everything because it’s all inspirational—especially the backs of cereal boxes.

Antonio Fuso: I read comics since I was 6. I start thinking about doing comics in order to pay bills at 12, when I fell in love for Superheroes comic books thanks to Tim Burton’s Batman with Michael Keaton (and a fantastic soundtrack by Prince). I decided to seriously try to do it when I bought a comic book drawn by a terrible artist (I will never tell you the name) and I said to myself “if this guy is a comic book artist then I can be too.” I know it is horrible to say this, but its true! 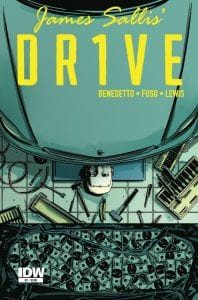 MG: You both have written\drawn for some characters. Who is the one character you have connected with the most?

MB: Of the few comic book characters I’ve written, I’d like to say that I’ve connected with Driver most. He’s the kind of comic character I like to see wandering around in his world—confident, tough, capable problem solver, doesn’t have much to say other than a few one-liners. Though I’m on the opposite end of the spectrum in real life, it’s a lot of fun to spend some time inside his head.

AF: Oh, this is a difficult one. I’ve drawn GI Joe for five years but I’m definitely not an “army guy.” I hate weapons. Sure, I don’t feel so connected to Zombies or Robots so we can say the Driver is the character I feel more connected with for his discretion and determination.

MG: Do you relate any of your stories\art to your own life experiences?

MB: In the case of Drive, not really. Most of my time spent behind the wheel is filled with a quiet rage thanks to perpetual slogs through traffic and bridge crossings. But, it’s impossible to say there’s no overlap at all.

AF: Yes, if you consider I use a lot of photo references for my work and you can find lots of funny pics of me acting like a comic book character ahahah! The Driver is essentially me. But I’m not sure this answers your question!

MG: What have you taken from your experiences and implemented into this series?

MB: Mostly I took my experience with the preexisting iterations of Drive and the many influences I saw there and tried to create a comic that matched their complexity and intensity while still being able to stand on its own as something unique and exciting. A tall order, I know! But with the expertise of Fuso, Lecce, and Lewis, I feel like we got there. 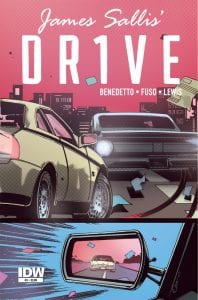 MG: What can you tell us about Drive without spoiling too much?

MB: Drive is based on the James Sallis novel that inspired the modern cult-classic film of the same name. If you’re a fan of the movie, our series will take you down a few side streets that have some unexpected turns. And if you’re new to Drive, issue #1 is a great place to start!

AF: If you loved the movie as I did, reading the comic book you will discover much more about the characters!

MB: Right now, I’m lucky enough to be working on a couple other amazing IDW series: Archangel and Tales from the Darkside. And maybe—if the fans demand it!—we’ll see the sequel to Drive hit the streets someday.

AF: Yes, sure. I’m doing something for the Italian market and covers for US publishers. I also have a secret project but I can’t talk about it yet!

MG: Thanks guys! The TPB of Drive is out now so be sure to pick it up! 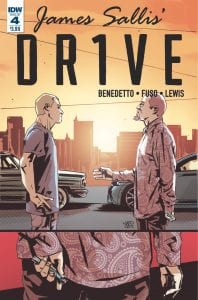 For more on Drive go to IDW for updates @ www.idwpublishing.com.

You can check out Antonio Fuso on Tumblr: https://antoniofuso.tumblr.com/ and on Twitter: @antonio_fuso

Home » Fandom » Michael Benedetto and Antonio Fuso push it to the limit with DRIVE!