Overall, people are responding positively to Megan Thee Stallion’s performance on Saturday Night Live.  She became the second woman rapper to both perform and host after Queen Latifah.

Although her house was recently robbed in Los Angeles, Megan brought excitement and positivity to the show. She played multiple characters including a fitness instructor who wants to make her clients’ butts bigger and a nurse who likes to dress up normal patients.

Numerous media sources applauded her for being “the host SNL required right now,” with some going so far as to say that Megan’s charisma elevated the entire show. A.V. Club called Megan “talented with an infectious natural charm and charisma,” claiming that she has the potential to draw viewers back to SNL.

Read on for fan reactions to Megan’s sketches and performances, which Vanity Fair applauded for how she “delivered with aplomb” while also addressing issues of anxiety and burnout. The publication also said Megan, who appeared in every sketch, was “working her tail off, was excellent company to the Studio Players.” 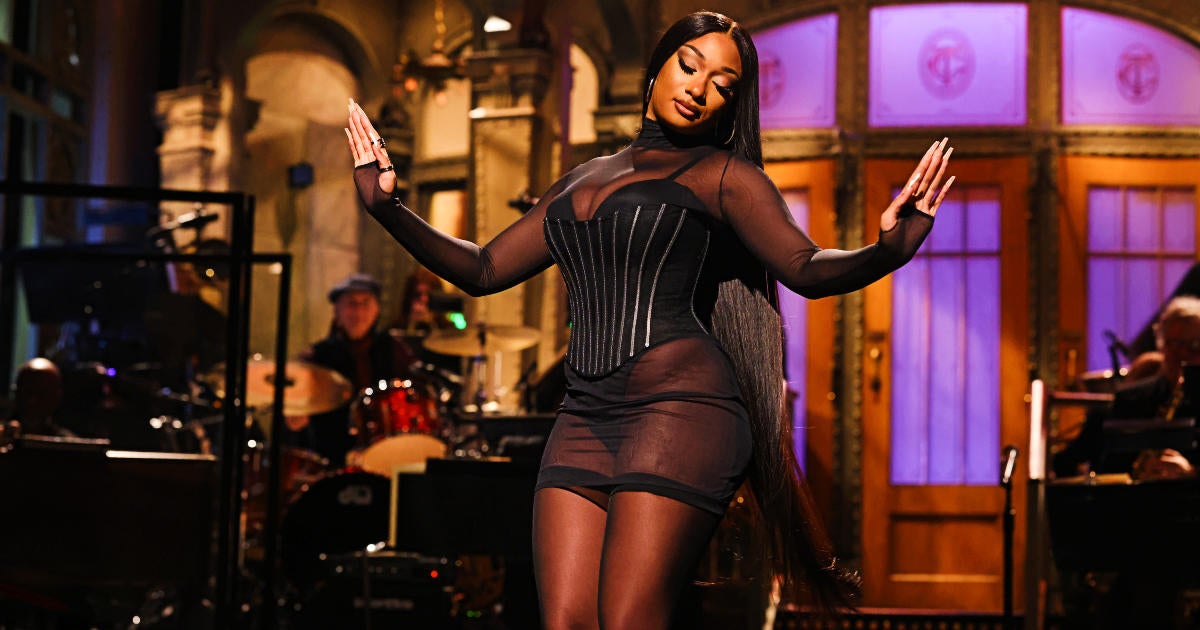 Megan used her monologue to demonstrate her British accent and appeal to Bridgerton’s casting director. She also gave a shout-out to badbitcheshavebaddaystoo.com, a mental health platform that includes links to online therapy services. The rapper definitely entertained one fan who tweeted: “Megan Thee Stallion just killed. Her monologue was really good. Loved the British accent, and I am here for her being on #Bridgerton. Make that happen !”

Megan’s first sketch was of her as a nurse at the “Hot Girl Hospital,” – funded by Golden State Warriors player Draymond Green for his community service hours. Rather than providing medical care, Megan and her colleagues performed Brazilian Butt Lift surgery. A viewer noted that it reminded them of Mad tv, referring to the 1995-2009 Fox sketch comedy series inspired by Mad magazine.

In one sketch, Megan and her new partner Devon Walker share their newly purchased home with Megan’s parents. Unfortunately, things go awry when dad (Kenan Thompson) is brutally attacked by a vicious deer that attempts to undress him. Throughout the skit,Thompson delivers his trademark over-the-top performance which had viewers in stitches – one even went as far as to say “Loving this deer sketch. Shout out to whoever controlled the puppet. Also Megan Thee Stallion is a naturally gifted comedic actress.”

Megan was also featured in the “Girl Talk,” sketch, which focused on a talk show hosted by Monique Money Monique Problems (Ego Nwodim). Megan inquired about advice concerning her cheating boyfriend; The two women conversed using different intonations of the word “girl” “It’s the fact that we as black ppl can communicate like this and fully understand it,”

Megan drew rave reviews for her song “Anxiety” which displayed courage in the face of her difficulties. The artist got emotional while singing about losing her mother, leading one fan to tweet, “People couldn’t last a mile in Megan’s shoes,” Another said they were pleased that she was still going despite everything she’d been through.