If you were an obsessive fan of the hit television series Friends (like I was and still am) then chances are you remember when the character Joey Tribbiani (played by Matt LeBlanc) randomly wore a sling for a few episodes.  In one episode during the 3rd season, everything is fine.  In the very next episode, Joey has a shoulder injury from jumping on the bed but, what really happened? 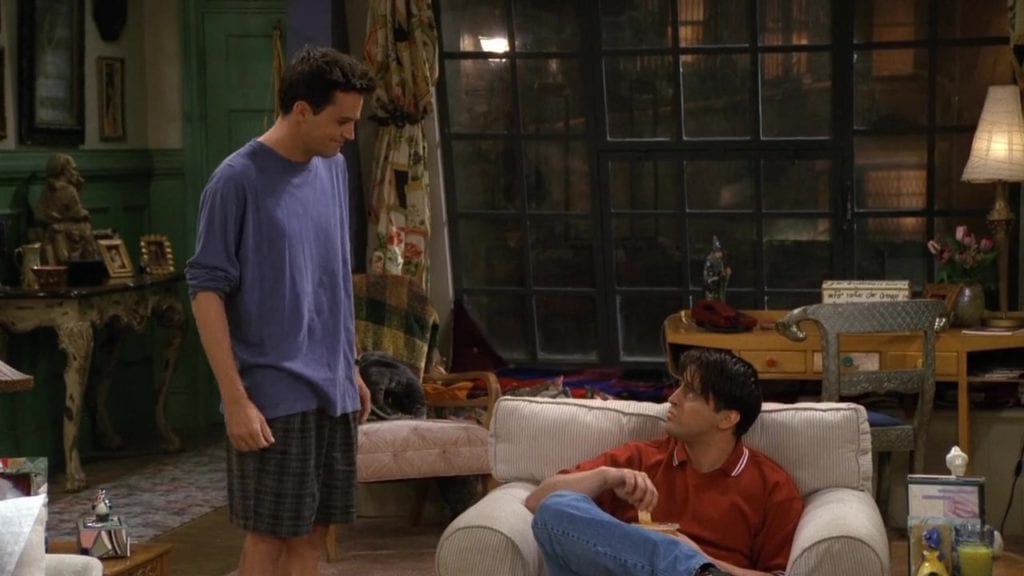 On Monday, LeBlanc appeared on Jimmy Kimmel Live! and told his story involving a failed “stunt” which lead to the injury.  It was season 3, episode 2 The One Where No One’s Ready.  The gang is getting ready to attend a special function at the museum for Ross (played by David Schwimmer).  Monica (Courtney Cox) is struggling with phoning her ex.  Rachel (Jennifer Aniston) can’t figure out what to wear.  Phoebe (Lisa Kudrow) has an unfortunate encounter with hummus and Joey and Chandler (played by Matthew Perry) are fighting over who has sitting rights to the arm chair.

LeBlanc injured himself during filming the second scene of the day.  At one point, his character Joey and his chair rival Chandler are both out of the chair at the same time.  They look at each other across the room, notice no one is sitting in the chair and both bolt for the seat.  Joey gets there first, safely, and reclaims his spot on the arm chair throne.

What actually happened, however, led to a dislocated shoulder for LeBlanc.  As he explains it:

“Somehow, I ended up completely upside down and was going to land on my head between the table and the chair so, I put my arm up to break my fall and just exploded my shoulder.”

OUCH!  The studio audience thought it was all part of the scene but, once LeBlanc got backstage, he collapsed in pain.  When he looked up, he wasn’t quite sure what was going on!  LeBlanc continues:

“I look up and Anthony Edwards from ER just happened to be there [ER filmed at the next stage over from FRIENDS] watching the show and he comes in and I’m like, ‘Wow, did I hit my head too?  Because I know you’re not a real doctor.”

After a few weeks in a sling, all was fine again but, what a crazy behind-the-scenes story!  LeBlanc also talks about the iconic opening credits scene and what it was like filming in the fountain.

Check out the full segment from LeBlanc’s interview below.