About a year ago DC Comics kind of found itself in a bit of a pickle. The New 52 line of comics had turned into a bit of a bust, and fans were voicing their frustration. The new take on some of their favorite heroes didn’t seem to be working. Years of story lines seemed to either be missing, nonexistent, or changed in ways that didn’t make sense. In order to make the DC universe a bit more fan accessible they had alienated a large group of their core fan base. Mainly the people who had been there for over thirty years reading DC comics. Something needed to change, and last May it did. DC released a stand alone comic called Rebirth, which was written brilliantly by Geoff Johns, that ushered a new/old era of DC comics. Instead of writing away the New 52 as if it never happened, Rebirth #1 addressed the matter head on and tried to explain it away while restoring some classic characters and interesting new story lines (Wally West and The Watchmen respectively). Since then DC’s entire line of comics has seemed to improve drastically. Rebirth #1 lead to writer shake ups and continuity changes, in some cases restoring, and the comics have benefited tremendously. The story telling has become tighter, characters are being celebrated properly, and the comics have become a bit more fun. Not everything is rooted in darkness and gloom, except you Batman, and the overall feel of DC comics has been accessible and exciting.

Well, it appears that Marvel is looking to go the same route this fall with the launch of Marvel Legacy which is looking to put the spotlight on some of the companies major characters with new story lines while restoring original numbering to it’s books. 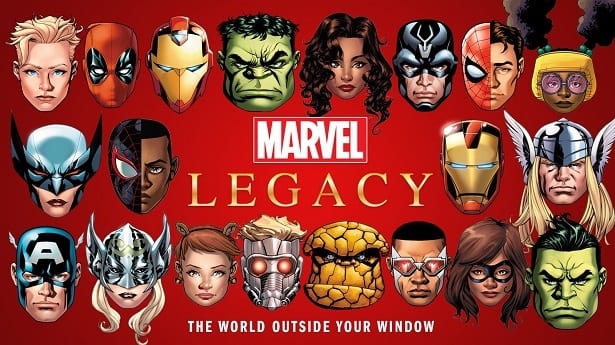 The announcement came from the Chicago Comic & Entertainment Expo where it was explained that a fifty page one shot titled Marvel Legacy #1 written by Jason Aaron (who kills it on Thor and Star Wars) and Esad Ribic (whose art in Secret Wars was breath taking) would be dropping this fall. Much like Rebirth #1 it is believed that this one shot will help “set the stage for the next chapter of the Marvel Universe with hope, heroism, heart and the Earth-shattering return of a beloved Marvel mainstay”. Keep going…

The Marvel Legacy initiative is a celebration of everything that makes Marvel the best in fiction and it’s a signifier of a new era for Marvel Comics. It’s a loving look at the heart of Marvel as we embrace our roots and move enthusiastically forward with all the Marvel characters you know and love starring in the biggest, boldest, best Marvel stories. All of which kicks off with the giant Marvel Legacy special.

That’s Marvel’s Chief Creative Officer Joe Quesada who will also be providing the awesome cover work for the Marvel Legacy #1 which you’ll be able to see below.

The “Earth shattering return of beloved Marvel mainstay” is something that is sure to raise some wondering eyebrows as it seems that the perfect candidates to return should be the Fantastic Four, who have not had their own series for a couple of years now (thanks Fox). Much like Rebirth #1, which brought back Wally West, it seems that Legacy is looking to restore familiar faces and use them as a spring board into new story telling. I honestly can’t think of a better candidate of returning characters than Marvel’s first family, as the Richards family has been sorely missed since the end of Secret Wars.  Another character to consider though is the Hulk who met his end in the events of Civil War II.

But what about some of Marvel’s new/younger characters? Should we be concerned that Legacy is going to make them irrelevant? There was that whole “diversity” issue a couple of weeks ago which had a number of people shaking their heads (myself included), and a movement like this celebrating the past could make their future seems a bit shaky. But I believe these characters are going to be okay. Once the Legacy one shot is released there will be a Legacy banner attached to a number of comics including, Avengers, Squirrel Girl, Spider-Man, Captain Marvel, America Chavez, Deadpool, the X-Men, Ironheart, The Punisher, Ms. Marvel, Captain America, Moon Knight, the Champions, Luke Cage, Odinson, the Hulk, Iron Man and the Guardians of the Galaxy. Titles like Ms. Marvel, the Champions, and Ironheart all show case our younger heroes which makes their future seem a bit promising so breath easy everyone.

I for one am happy to see Marvel take this approach. I think the company has relied too much on big event crossovers as of late, and if the rumors are to believed than Secret Empire is to be the last one of those for at least eighteen months and also could lead into the importance of Legacy. What would make the term legacy more important than the betrayal of Captain America? Perhaps helping restore his?  Rebirth #1 has been nothing but a huge success for DC so here’s hoping that Legacy will do the same for Marvel.

What do you think Geeklings? Are you excited about this announcement? Do you think Marvel is in need of a face lift? Who do you think will be returning in the one shot? Any and all theories are welcomed in the comments below. If you want to talk more Legacy or comics in general you can find me on Twitter @iamgeek32. I don’t know about you guys but this announcement has me feeling optimistic about the future of Marvel and maybe showcases just how important the outcome of Secret Empire will be. Exciting stuff.