Followers of Mark Ruffalo were blessed last night when he accidentally live-streamed the first 10 minutes of Thor: Ragnarok at the film’s premiere. After having live-streamed from the Red Carpet he forgot to turn off the feature before heading into the theater, giving about 2000 people the opportunity to listen to the first 10 minutes of Thor from his pocket.

Fortunately, he eventually realized what he had been doing, which resulted in these two hilarious photos where he most likely saw his career, and let’s face it – his life probably, flashing before his eyes.

Here’s a close up: 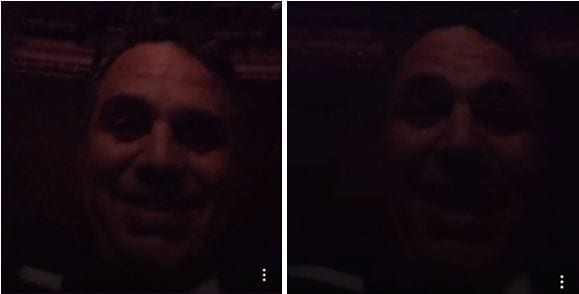 Fans know that when it comes to their films Marvel is a stickler for secrecy and confidentiality to avoid leaks, just ask Tom Holland.

theory: tom holland and mark ruffalo are in competition to get fired from marvel first pic.twitter.com/wu8AbgtUs9

mcu cast: you can’t say or do that it’s a secret
mark ruffalo and tom holland:
… anyways so we’re here at-

So, the fact that one of the film’s stars was responsible for it naturally made them very worried for Mark’s well being.

LOVE AND PROTECT MARK RUFFALO AT ALL COST pic.twitter.com/bzNydToYyG

Neither Marvel or Mark has yet to make any comments on the situation but if this has taught us anything it’s that A) We don’t deserve Mark Ruffalo and his inability to work technology  B) We should all probably go follow him immediately on all platforms and C) We should definitely go see Thor: Ragnarok!

Prepare to Kneel for your Queen in the new ‘Thor: Ragnarok’ Teaser