Casual fans of One Direction – and even some long-time fans may be surprised by some of Louis Tomlinson’s recent interview, but long-time fans of Louis…well…they’ve known most of it for years. From the way he lacked confidence when One Direction was formed to channeling strength from his mom; he opened up about the last six years more candidly with Observer Magazine than has ever been seen from him before.

One of the takeaway statements he makes in the interview is that at first, he didn’t know what he was actually bringing to the table as a member of One Direction.

‘You know I didn’t sing a single solo on the X Factor. A lot of people can take the piss out of that. But when you actually think about how that feels, standing on stage every single week, thinking: ‘What have I really done to contribute here?‘

This is one of those things that might have been easy to overlook if you were just a casual One Direction fan, but if you paid close attention, or even if you just think about it now, it’s easy to see how that really set a tone over the course of his life in the band.

Now, that’s not to say that being in One Direction was awful for Louis, on the contrary, it was an incredible experience and regardless of the rumors or what have you; the boys took their hiatus at this time for a reason. That reason is so that when they come back together as a band it’s not a worn out project or something they tried to suck the life out of until it was dry. It’s something they care about deeply.

They went out on a high and for Louis that also mean that they went out when he was feeling the most confident. He initially fought against the hiatus.

‘It wasn’t necessarily a nice conversation. I could see where it was going.‘ 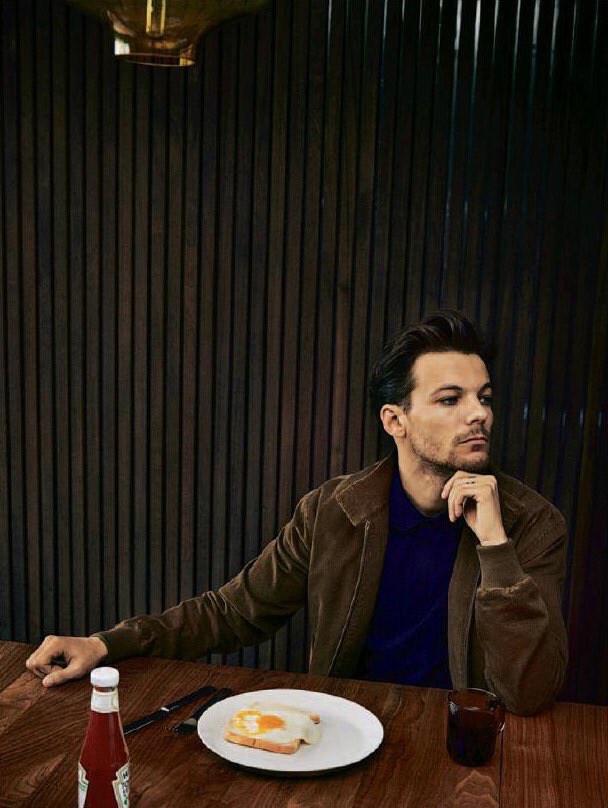 However, all of the boys came to agree that it was what was best for them, and they’ve all had time to not only create on their own…but live a little bit of a ‘normal’ life, depending on how you look at it.

Perhaps their lives will never be normal, but they’re not living out of tour buses and hotel rooms anymore. Louis gets to post selfies and other photos from his home in LA, from festivals and vacations and time spent at home with his family. It’s not a rare occurrence for him to wake up in the same city for 20 consecutive days at a time anymore, he’s experiencing things differently.

Now that doesn’t mean that he’s not staying busy. From his own label and a girl band he’s worked with to writing songs and recording them, touring his hit ‘Just Hold On’ with Steve Aoki and focusing on his new single ‘Back To You’ which is set to premiere any time now…he’s working, but he’s doing it at his own pace and figuring out what he wants to say now – on his own.

‘Although my problems might look a hell of a lot different they’re actually, fundamentally, the same. Loss feels the same. Heartbreak feels the same. The fundamental hurtful things for a human are all the same. And I feel like I have to push that constantly, that humanized… The humanized feeling that…’

The interviewer went on to ask if he meant that he wasn’t a toy and Louis said yes, sometimes it’s hard for fans to realize that he’s an actual person and not just some larger than life idea.

Speaking of that loss and pain comes the almost impossible topic to address of the death of his lovely mom Johannah. She was a light not just in the lives of Louis and his siblings or the boys of One Direction, but their incredible fan base.

Johannah passed away less than a year after her diagnosis of extremely aggressive leukemia. He actually learned that her condition was terminal on a day he was expected to be all smiles and had photos taken at a friend’s wedding.

‘At Jamie Vardy’s wedding of all places. Talk about your places, for something super-traumatic. My mum told me, uh, yeah, that she was definitely terminal.

It wasn’t long after that she passed away, just days before his first solo performance on the X Factor and he asked his mom how she expected him to do this now…but it wasn’t just the music he was asking about, and the answer she gave him wasn’t just about his career either.

‘I remember saying to her: ‘Mum, how the fuck do you expect me to do this now?’ And she didn’t swear much, my mum. She’d always tell me off for swearing. And this time she was like: ‘You’ve got to fucking do it, it’s as simple as that.’ It was football manager, team talk stuff.‘

He went on to sing ‘Just Hold On’ with Steve Aoki days after she passed away and the performance is still hard to watch, he blows a kiss up to her after he made it through with Steve at his side the world surrounding him with love.

Towards the interview, he claims he won’t say it’s all been for his mom, but that, in the same breath, it has been. He did he best to make her proud when she was alive and he’s doing his best to continue that even after her death. It’s a testament to the strength he received from her but also to the love that the two shared. She was Louis’ best friend and his mom, that’s a hard loss to experience.

After all is said and done, we can’t imagine the music industry without Louis, and we’re glad we won’t have to. From a new solo song to an entire album, we’ll be hearing more of his story in his own words as 2017 continues to progress and we’re glad he found the confidence to tell it.