If you are a fan of Breaking Bad and live in Southern California, be on the lookout for a stand alone pop up location of Los Pollos Hermanos in Downtown Los Angeles for the next 2 days.

The Iconic fast food restaurant from Breaking Bad and now Better Call Saul, will be serving up food to the public today and tomorrow, March 29 and 30, from 12 pm to 10 pm. The location will be located at 1345 E. 6th St. and is just a short distance from the Arts District.

On April 9 and 10, New York will also have their own pop up located at 243 Pearl St. This will be a follow-up to the Walter’s Coffee Roastery that popped up last September in Bushwick. The hours of operation for the NY location will be April 9th from 11 a.m. to 8 p.m. and April 10 from 10 a.m. to 8 p.m.

Recently, another  Los Pollos Hermanos popped up in Austin at SXSW. Oddly, no chicken was served but customers were still able to eat curly fries with 3 dipping sauces and water. No word if the Los Angeles location will offer the same or will actually serve chicken.

Bob Odenkirk (Saul Goodman) and Giancarlo Esposito (Gus Fring) were both on site at the Austin location, chatting with people in line while they waited. 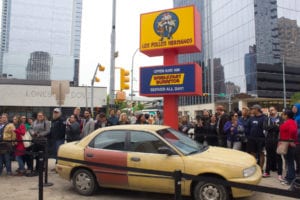 If you plan on checking it out, expect long lines and heavy traffic flow. Parking might also be an issue being that it is Downtown. My suggestion would be to take public transportation, Uber or Lyft.

Past episodes of Better Call Saul can be seen on Netflix. The third season premieres on April 10 on AMC.

Home » Uncategorized » Los Pollos Hermanos to Pop Up in L.A. This Week and NYC in April