Just call her “Lorde of the Rings.”  Onion rings that is!

Early last week, news broke regarding a super secretly run Instagram account which only posted reviews of onion rings from different cities.  Thanks to some serious sleuth work from New Zealand Newshub, they put together a pretty convincing caseload of evidence which all pointed to singer Lorde as being the owner of the mysterious account. 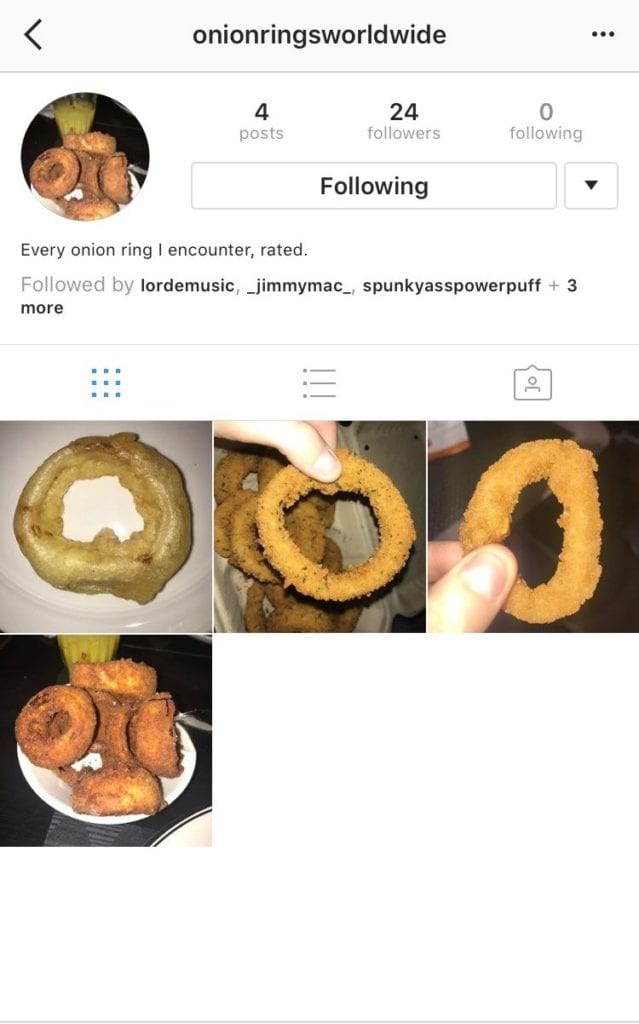 Newshub sited facts such as the postings were being made on or within days of Lorde visiting those locations as part of her tour.  Or the fact that the followers of the account were all friends of hers and, Lorde herself was the first one to follow the account. But, does the account actually belong to Lorde and, if so, why?

Fallon pulled up a photo of the now deleted Instagram account of @OnionRingsWorldWide and Lorde finally let her confession slip:

“I have to explain for a second. Here’s the thing: I sort of naively didn’t realize it would be ‘a thing’ that I was going to different places and trying the onion rings at each of those places,” Lorde finally confesses.

“It is you?” Fallon asks in disbelief.

“That is the best thing ever. I love that it’s you.”

After some laughs, Lorde explained why she felt the need to take down the account after it was discovered, “I feel like it reads like the kind of thing a pop star would do to look relatable. Which I wasn’t doing. It was a funny thing with my friends on the tour. I was like, ‘This is a good pastime.’”

Most importantly, during the interview, Lorde shares that regardless, she’s still going to eat onion rings and she also shared her options on what makes for the perfect ring, “A batter works better than a crumb. It’s a bit lighter. The other thing you can do to make an onion ring magical is lightly pickle the onion before you batter it up.”

In all honestly, the account sounds amazing and I wish there was such a thing for french fries too!  Check out the full interview below.