Amber Heard was recently in a huge legal battle with Johnny Depp. Both accused each other of pretty terrible things, with most of the internet siding with Depp. In fact, #JusticeForJohnnyDepp is still trending at the time of this writing. At least, it is in certain countries. It’s nice that some people are still trying to show their support for the actor after everything that happened. Many people were wondering if Amber Heard would end up getting fired after the nasty accusations thrown at her. Many of which were actually proven true. Looks like nothing happened to Amber Heard after all. Truth be told, I’m not surprised. It was heavily implied months ago that nothing would happen, so I guess that’s that. Then again, the whole thing could be a fakeout. Maybe she’s just trying to pressure the studio into bringing her back. 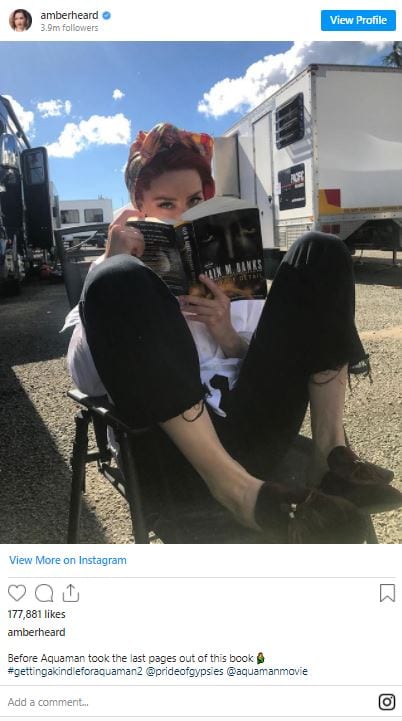 Here’s something new I learned today. Apparently while filming Aquaman, Jason Momoa would tear out the last two pages out of whatever book she was reading. On Saturday, Heard posted a picture that was taken on the set of the first Aquaman film. The caption reads, “Before Aquaman took the last pages out of this book. #gettingakindleforaquaman2.” Momoa himself commented on her post with some laughing emojis. What does it all mean? Who knows? But most people think it means that AmberHeard is getting ready to return in Aquaman 2.

Please keep in mind that at this point in time it is all conjecture. We don’t actually know what’s going on, it just doesn’t look good. Whether or not you paid attention to the trial between Heard and Depp, one thing is for sure: It certainly isn’t fair what happened. For those who don’t know Depp was fired from his projects while the whole thing was going down. #JusticeForJohnnyDepp indeed.

You can catch Aquaman on HBO Max.