**This post contains spoilers from the latest season of The Walking Dead. If you are not caught up to episode 8.08 then please read at your own risk!** 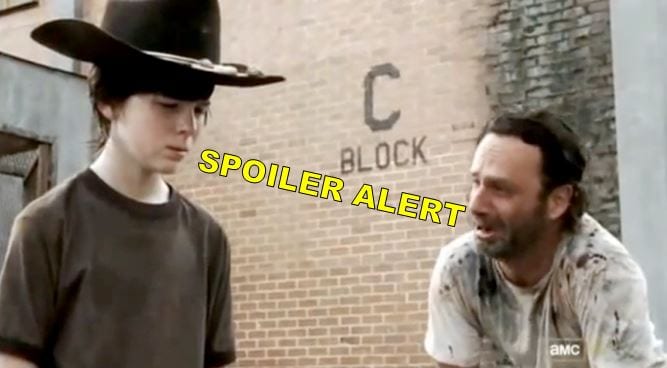 I guess there’s a lot of truth in the statement that “you see what you want to see” especially when it comes to looking back on the scene from The Walking Dead where Carl Grimes got bit by a walker. We all naively assumed that Carl had the greatest plot armor of them all due to his importance to both The Walking Dead creator Robert Kirkman and the source material itself – he is the future of the apocalypse after all. Oh, how wrong we were.

We decided to take a look back at the series-altering scene between Carl and Siddiq that led to Carl’s bite and truthfully, we can’t believe we missed it in the first place. Actually, that’s a lie. The writers didn’t want us to see it. They didn’t want us to draw attention to what happened so that there would be this huge reveal in the “How It’s Gotta Be” and mission accomplished.  Not to mention, this episode took place two whole weeks before the midseason finale, making the scene already long forgotten, and us all looking like this when Carl revealed the bite:

In actuality, we all just perceived it as another close call for Carl, something that we had seen plenty of throughout the series. So, if you’re feeling up for the worst trip down memory lane ever, we’ve broken down the whole moment for you scene by scene. Take a look below!

Carl was able to track Siddiq in the woods and watched as he took out a walker who had stumbled into a trap.

He tells Siddiq that the first time they met, in the season’s premiere, his dad was simply shooting warning shots above his head, not at him. The two formally introduce each other and Carl offers Siddiq some food and water. ‘Why?’ Siddiq asks.

When Carl isn’t living the psychopath life, he is absolutely living out Lori’s dying wish for him to always do the right thing. It had certainly been a point for his character in the first half of the season and tends to be a major warning sign that something bad is forthcoming. We all know that compassion is not rewarded in this world.

Are we glad he found you? No, not anymore.

Carl then tells Siddiq about Alexandria and asks him the three questions. Siddiq reveals that he has killed 237 walkers, of which the exactness surprises Carl. He also admits to killing one person, but only because “the dead tried to kill him, but they didn’t.” When Carl inquires about his walker traps, Siddiq reveals that he tries to kill as many walkers as he can as a way to honor his mother’s belief that killing them would free their souls.

Valid question, Carl. And the answer is also no, but it’s about to make things much harder for you. Siddiq says he’s not sure but “you got to honor your parents, right?” Carl tells him that if he were honoring his dad, he wouldn’t be there and he definitely wouldn’t be inviting him back to Alexandria.

One of the biggest turning points for Carl’s character was when he shot Lori at the prison back in season 3, so it is definitely full circle for him that he would go out doing the one thing that he promised her he would do.

Side Note: From an upset fan perspective, I’ve surmised that basically, Lori is still finding ways to troll us and ruin everything from beyond the grave. And while that’s probably not fair, I just want to say that if I wanted to watch Lori screw things up and Carl leave the house to wander around in the woods I would just put on season 2.

Alright, moving on to the big moment… As the two are heading back to Alexandria, they encounter three walkers enjoying an afternoon snack on a dead deer. 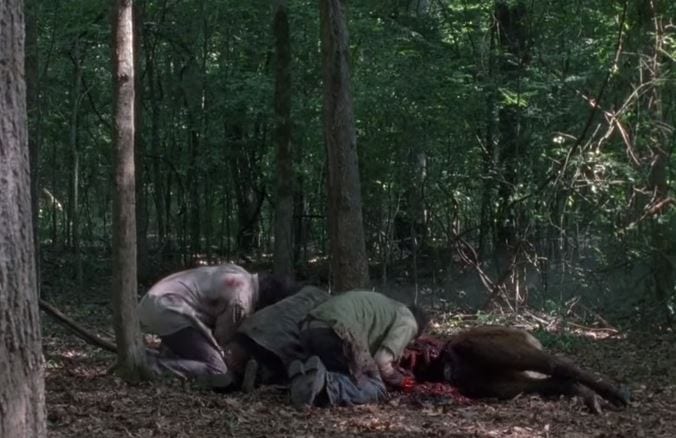 Since Carl is now fully committed to this ‘do the right thing’ way of living, he decides that they’ll take the time and energy to put them down for Siddiq, which is a sweet gesture until you realize just how much weight this sentence now holds:

So, in corner one we’ve got Siddiq – with an impressive 237 walker kills – who somehow manages to look like he has never killed a walker in his life.

In the other corner, we’ve got Carl Grimes – who has managed to survive 7 seasons of an apocalypse, including a  psychopath phase here and there – who has also seemingly forgotten how to effectively kill a walker.

Meanwhile, the commotion draws a few more walkers to the scene and when Carl goes to help Siddiq he gets bumped to the side, drops his knife, and then trips and falls onto the deer with a walker falling right on top of him.

Without his weapon, Carl ends up in quite the pickle because while he’s struggling to fight the walker on top of him, he sees another one coming.

Siddiq tries to get over to help him but more walkers keep blocking his path. Carl eventually manages to push the walker off of him just in time for the other one to fall on him. However, the big detail that I certainly missed (and you may have too) is that the walker he pushes off is still alive and sits back up to bite him while he’s fighting off the new walker. 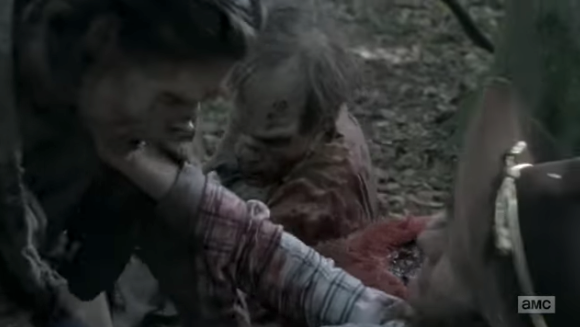 Oh, how I wish this was the dumbest walker that ever existed and actually bit the deer instead.

And just to break your heart a little more, here is the moment that Carl realizes he has been bitten, which is even more heartbreaking because he was finally able to get a free hand to reach for his gun seconds too late. 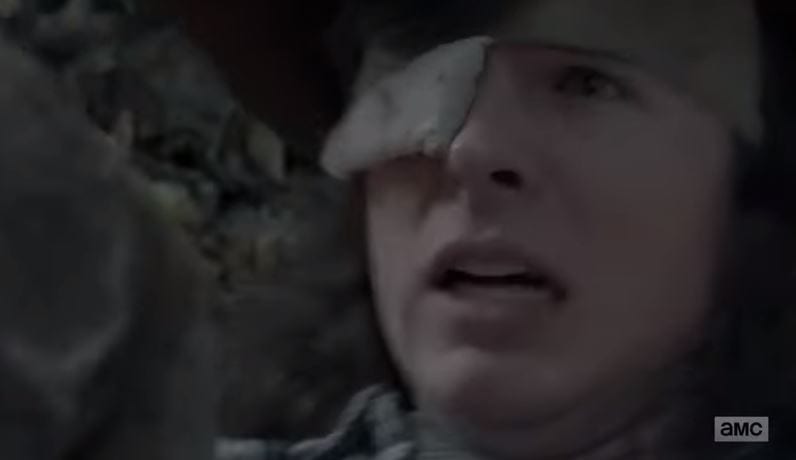 He’s able to shoot both of the walkers but when he gets up you can see that he is clearly aware of what happened, and in shock, stops to look down at his side (originally what I assumed was just the dead walkers).

The closing minutes of the scene are what’s even harder to watch now that you know Carl’s fate has been sealed. There are so many ‘what if’s’ including one that Siddiq mentions when he says ‘you could’ve left.” But as Carl continues to somewhat come to terms with what just happened, he takes on one of his last missions – taking care of Siddiq.

“I don’t want to make any trouble. Your dad didn’t want anything to do with me,” Siddiq tells him.

This was the ultimate foreshadowing and will truly be one of Carl Grime’s most defining lines. Carl will have died doing the right thing, he showed mercy and opened his heart and his home to someone. It is a perfect symmetry to the ‘all-out war’ path that his dad is currently on and his death will absolutely alter the way that Rick navigates the apocalypse moving forward.

So, the boy who survived this:

Also, can we mention just how similar Carl’s close call was in this episode to the scene that resulted in him getting bit? Definitely an interesting callback.

While fans, and even some of the cast, certainly have a lot of thoughts about Carl’s imminent death, Showrunner Scott Gimple and Chandler Riggs have both promised that episode 9 would be a touching goodbye letter for both Carl’s character and for the fans who have watched him grow up over the years.

However, as nice as that all sounds, we predict it taking a lot more than one episode for us all to accept Carl’s departure, especially since there was still so much more story to tell. Also, we don’t even want to think about how this is going to affect Rick.

Did you catch Carl’s bite the first time around? You’ve had some time to let his death sink in, how are you feeling about everything now? What are your predictions for the back 8 episodes? Sound off!

Be sure to tune into the midseason premiere of The Walking Dead on February 25th at 9:00 EST and head back to Fan Fest for more coverage on your favorite group of survivors!