So, when I decided to write this article I thought how easy it would be but it has been an hour since I watched the video to Logic’s 1-800-273-8255 ft. Alessia Cara and Khalid and I am still crying.

Here is the professional reporter response.

I know I didn’t have to repeat the title, but when you are dealing with the topic of suicide, that number has saved more lives than we will ever really know.

In 2015 Logic started down a dark path with depression, anxiety, and stress that comes along with fame. “I was so scared because I thought I had to work work work because I thought I might only be around for five years…. I thought I wasn’t good enough to last”, he revealed in an interview with CNN. However, he worked through that and wanted to reach out and help others who were lost in their own dark place. 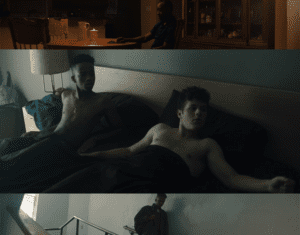 On the day, the video was released the National Suicide Prevention Lifeline had their second-highest call volume in their service history.

In case you are not aware their phone number is 1-800-273-8255. Since the video was released by Def Jam Recordings and Visionary Music Group last week it has been viewed more than 12 million times on You Tube as well as many “Celebrity YouTubers” has posted reaction videos to their first time viewing it.

The song is moving by itself but you put the extremely moving and well-casted video with celebrity cameos by (Don Cheadle), (Matthew Modine) and (Luis Guzman) and there isn’t a dry eye in the room.

The young teen boy in the video (Coy Stewart) father played by (Cheadle) finds out that he is gay and kicks him out of his home. From there he goes to his love interests home until that boy’s father also finds out and from there this young man’s life spirals out of control.

From becoming homeless and sleeping at his school, to being bullied by his team mates and forced off the team to the point he reaches that point where some many in the world have been where they have reached for that gun, for the bottle of pills, for the knife but something stops him from pulling the trigger and you finally see him picking up his phone and calling 1-800-273-8255. Then the viewer can breathe again, and cry again because it fast forwards to the future to that young man as an adult marrying his husband and adopting a child with his father at his side.

On MTV’s 2017 VMA’a Logic along with Alessia Cara and Khalid perform their moving hit song on stage where they were joined by 50 suicide attempt and loss survivors. All wearing matching white shirts with 1-800-273-8255 and You Are Not Alone.  The energy and emotions that were running through the entire audience were just as strong as the emotions that were running through every viewer who was at home watching.  With the very good chance that one of those viewer’s life might have been saved by watching the MTV VMA’s this year thanks to this song. 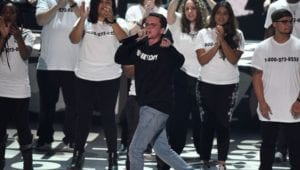 This has been a rough year in Hollywood with celebrity suicide’s in the news which always brings attention to the tragedy and heartbreak that it leaves behind but this song reaches out to EVERYONE who is suffering in silence.

Depression is a cruel disease and it affects everyone. Depression doesn’t care how old you are, how much money you have in the bank, doesn’t care if what your sexuality is if you are a rock star, an actor or a teenage boy coming out in high school.

So, from the unprofessional reporter of me let me say this I suffer from depression and you are NOT ALONE. I mean that from every fiber of my being and I urge you to please take this song to heart and remember it’s title 1-800-273-8255 or to make it easier to remember 1-800-273-TALK…..I care and Fan Fest Cares.