Logan Miller’s new film Prey is a twisted thriller that’s sure to have audiences on the edge of the seats. From Hyde Park Entertainment Image Nation and Blumhouse Productions, the film is directed by Franck Khalfoun (Amityville: The Awakening).

Check out the film’s synopsis below:

[row]”This horror-thriller from Blumhouse & Hyde Park with Director Franck Khalfoun (Amityville: The Awakening) follows Toby Burns (Logan Miller), a millennial coldly floating through life and disconnected from his family. After his father is tragically killed in a carjacking, Toby is left stricken with guilt. He is begrudgingly enrolled in a “Lost and Found” program, in which he will spend three days and three nights on a remote jungle island. Toby soon finds that this “uninhabited” island is not so lonely when he meets a mysterious girl named Madeleine (Kristine Froseth). It soon becomes clear that neither of them are safe here and time is running out. Someone or SOMETHING bloodthirsty lurks in the jungle, and Toby must find a way off this island before becoming its PREY…”[/row]

We recently had the opportunity to speak with Logan about his new film and more. Check out the full interview below.

Denise Caputo: Hi, Logan! Thanks for taking the time to speak with me today. Before we dive into talking about your new movie Prey, which I had the opportunity to screen, and it’s freaking awesome!

DC: Of course. Tell me a little bit about how you got into acting.

LM: Well, I was but a 12-year-old boy, and I loved movies. I went to a summer acting program in Dallas, Texas, under this teacher named Katherine Sullivan who is still out there teaching today. I just enjoyed acting or just the idea of being an actor. Then from there, I was able to get an agent in Dallas, Texas and I started doing Super Soaker commercials, The Game of Life commercials, Transformers commercials, and it only kind of snowballed from there. I got my first movie out of Dallas, which was a movie called Ghost of Girlfriends Past, where I played a young Matthew McConaughey. Then, I made the transition into Disney and then from Disney to Indie films. And here I am still doing it about ten years later. It’s been amazing.

DC: Awesome. So, your new movie is called Prey, and it’s releasing in theaters and video on demand on September 27th. It’s a super creepy, supernatural thriller with an interesting concept behind it. What can you tell our readers about your new film?

LM: I play a character named Toby. Toby is kind of disconnected from reality, as I feel a lot of kids are these days. But then, reality punches him right in the face and his father is brutally murdered outside of his house by some masked people who are trying to steal his car. Afterward, his mother tries to help him deal with this and he’s put in a program designed to teach kids survival skills in the middle of a jungle where hopefully he can rehabilitate himself. Part of this program is that they make these kids do a solo survival three-day course on an uninhabited Island. What Toby finds out is that the Island actually is not uninhabited and there’s somebody that lurks within the jungle; Somebody who has quite an interesting story with themselves.

DC: Was there anything in particular about your character, Toby Burns, or the film that drew you in and interested you in this project?

LM: Well, it was a unique chance to take a survival course of my own. A lot of people have asked me what kind of training I did and stuff and the truth is I didn’t do training. I did the film. That was the training course. I take projects to find myself in an interesting place, and this one threw me into the jungles of Malaysia. I was pretty sure that I was never going to have an experience quite like that ever again. So I was like, why not try it?

DC: That’s right. Why not? Now, watching Prey, I was kind of picking up on some vibes and inspirations from other films/shows. There were some vibes from the TV show LOST mixed in with a little bit of Tom Hanks in Castaway, and maybe a little bit of The Blair Witch thrown in. This all made for a really exciting viewing experience. It was suspenseful and fun to see some nods to those classics. Did you draw any inspiration from those pieces of work for your performance? 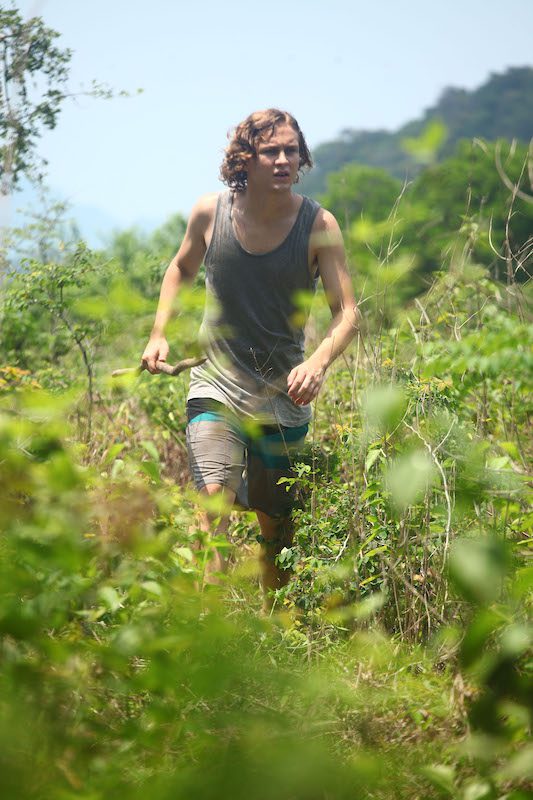 LM: Well, one of them that you said is Castaway, and I can definitely identify with that, but I’d say it’s Blue Lagoon meets Fatal Attraction meets The Exorcist. So, there’s a lot to pull from there, and I basically just watched some movies that had jungle experiences in them; like Apocalypse Now and definitely Castaway, as you said. Survival skill movies kind of like that. I think that was what kind of peaked my inspiration.

DC: Awesome. Do you prefer working on horror-type films more so than comedy? You have a mixture of both in your background, but lately, seem to be geared more towards the horror side of the spectrum.

LM: Well, comedy is my number one love, but horror definitely is something that I thoroughly enjoy as well. There are so many unique storylines in horror at this moment in time, that’s why I’m so drawn to it. Along with that, the genre is making such a great resurgence, and there are so many amazing filmmakers that are coming out of the horror genre right now. So, to take these opportunities is very gratifying at this moment in time. It’s not just slasher flicks anymore. It’s definitely a world of films that are being told in very interesting ways. I’m actually happy with the fact that comedians are now tapping into horror. Like Jordan Peele, for example. It’s great that there is somewhat of a hybrid forming within the genre.

DC: I agree with all of that, 100%.  Now, in addition to Prey, you were also on one of my favorite horror-themed shows which is The Walking Dead.

DC: Your character had so much potential. I loved him, and then all of a sudden, he was gone. It was horrible.

DC: Right? Seriously! Despite your character’s untimely demise, what was it like working on a show that’s such a huge cultural phenomenon like The Walking Dead?

LM: It felt like I was completely immersed within The Walking Dead. What a great group of people to be able to work with! Greg Nicotero was my favorite out of the people to work with because of his rich history working within the genre. He’s worked with so many amazing actors like Quentin Tarantino, and he has helped shape most of what horror is today too. Getting to jump into that world, getting to shoot on film was amazing. I couldn’t say more good things about that experience. They envelop their world. At its core, The Walking Dead is about family and a true family is making that show. It’s amazing to see what they’ve created, and it just goes to show why that show is still existing. It’s still happening, it’s great, and there’s a reason for that. It’s because of all of the great people that are involved with it.

LM: Man, I nerd out about comedy big time. Tim Heidecker is a hero of mine. I’ve had the opportunity to meet him a couple of times, which has been great. I love everything that he’s been creating, including this universe that he’s made called On Cinema. It started as a movie review show that has turned into people dying. His character created a music festival at which 20 kids die because he put out nutritional vapes to all of them. Then, he went to court, and it was just the most amazing character development I’ve seen in comedy. So very Andy Kaufman-esque. I completely nerd out over that.

DC: Awesome. Lastly, is there anything else you want our readers to know about Prey or do you have any other upcoming projects that you’d like to promote?

Logan Miller: Yeah! Prey is a mind-bender, and if you want to jump into the jungles of Malaysia with me and Kristine Froseth, then definitely take a watch. Also, I’ve have We Summon the Darkness coming out soon with Alexandra Daddario, and I am doing the sequel to Escape Room in the coming months.

Big thank you to Logan Miller for speaking with us about his new film Prey. In addition to Miller, Prey also stars Kristine Froseth. The film hits theaters and Video on Demand this Friday, September 27th. Be sure to check it out and see if you could survive!