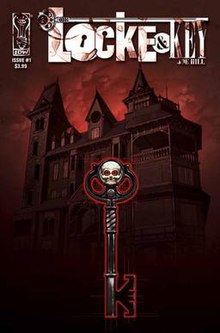 The family has finally come together for Netflix’s upcoming series adaption of the Joe Hill’s comic, Locke and Key. While a pilot had originally been filmed at Hulu featuring Jack Mulhern, Megan Carpentier, and Jackson Robert Scott as the Locke siblings, it has undergone some significant recasts. According to Deadline, American Crime and Falling Skies alum Connor Jessup will star as the eldest Locke sibling, Tyler with Brimstone’s Emilia Jones playing Kinsey Locke. It star Jackson Robert Scott will remain in the role.

Locke & Key is is “a horror-fantasy series that revolves around three siblings who, after the gruesome murder of their father, move to their ancestral home in Maine only to find the house has magical keys that give them an array of powers. Little do they know that a devious demon also wants the keys and will stop at nothing to attain them.”

It’s been a long road for Locke & Key, which first began its journey to the small screen in 2010 when Fox ordered a pilot from Alex Kurtzman, Roberto Orci, and Steven Spielberg. Shortly after Fox passed on ordering it to series, Universal picked up the rights to the comics with the intention of making a feature film, although that ended up not happening as well. Then in April 2017, Hulu placed a pilot order for the series, which they passed over in March. So, to say Locke & Key has been resilient is quite the understatement, but in the world of television, you can’t do much better than Netflix these days.

The Hulu script was originally written by Lost’s Carlton Cuse with creator Joe Hill and directed by It’s AndyMuschietti. Now, Aaron Eli Coleite will be penning the Netflix adaption with help from Hill while a new director has not been named. Andy and Barbara Muschietti will still receive executive producer credits on the Netflix series as well. Cuse will be serving as co-showrunner alongside The Good Wife’s Meredith Averill. The series was picked up for a ten-episode first season.

Are you excited to see Locke and Key on the small screen? Let us know!