HMV revealed an exclusive Limited Edition Steelbook for Batman V. Superman: Dawn of Justice. Beside the fancy steel look, it has a revisable form! One side shows Batman with the Superman logo on its face and the other side shows Superman with, of course, the Batman logo on its face. This special case also includes 2D, 3D and UltraViolet.

Here are the specification to the Batman V. Superman Steelbook: 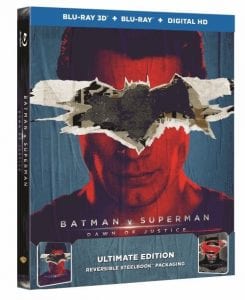 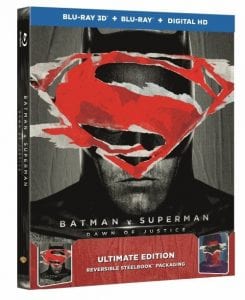 Includes over 2 hours of extras

Number of Discs: 3
Extra Content (presented in 2D only):

This Limited edition Steelbook of Batman V. Superman: Dawn of Justice can be pre-ordered on the HMV website and will arrive on August 1.