As the pop culture world lines up at theaters around the world to see Marvel Studios’ Black Panther, a few things are happening. First and foremost, fans are leaving the theater inspired – inspired to be who they were born to be, to fight for the good of themselves and others, and to embrace brilliance and intelligence and never let it sit on the back burner.

Second, fans are finding a renewed joy in the MCU. A cloud has been hanging over our heads with the promise of death and destruction when Thanos appears in Avengers: Infinity War, and it’s been a bit of a bummer. Seeing Black Panther was a reawakening for Marvel fans and it came at just the right time. The MCU is shifting and wouldn’t it be wonderful to see T’Challa take a huge lead?

Third, fans are talking about the very real messages of the film. It’s reflective of society and it shines a light on the darkest parts of what a difference in circumstance can mean for two people. T’Challa and Erik Killmonger could have had very similar stories but they ended up so different just because of what was readily available to them. It’s part of what makes Killmonger such a strong force in the MCU, he brought with him a different side to ‘villain’.

Last, but most certainly not least, fans are talking about those post-credit scenes.

First, we see T’Challa, Okoye, and Nakia at a United Nations meeting where it’s finally been decided that Wakanda will share their knowledge and resources. However, the world still believes the country to have little to nothing. Before T’Challa can explain to them what Wakanda has to offer, the scene ends, but not before a sly smile.

This sets up Wakanda to be a power player in Avengers: Infinity War, which makes sense. There are scenes in the trailer from Wakanda and maybe the resources, technology, and vibranium are what can truly put a stop to Thanos’ evil. 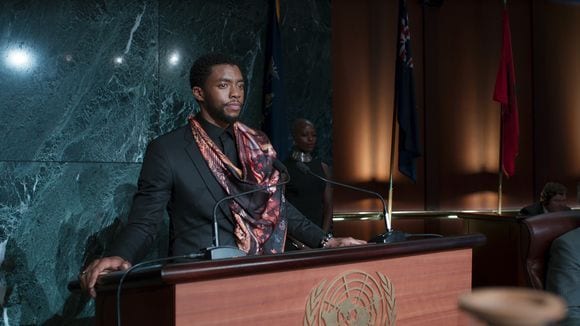 The second scene begins with someone waking up, the audiences seeing themselves as the person, looking upon 3 kids. They scatter quickly and run to Shuri as she asks if they’re messing with ‘that man’ again. The camera pans over and we see Bucky Barnes himself emerge. The audience gasped at this, at least in our theater, because that means that Shuri feels confident that she fixed Bucky’s brain, thus getting him out of his frozen state.

She also goes to call him Sergeant Barnes, and he tells her it’s just Bucky. Be still our hearts.

Shuri goes on to tell him they’ve got more to see and to learn and walks off, leaving the camera to focus on Bucky as he looks out at Wakanda. Perhaps feeling free for the first time in a long time.

This, again, sets up Wakanda to be important in Infinity War. Not just because of Bucky’s resurgence, but because Shuri is a brilliant and confident power player. We can’t wait to see what she brings to the battle against Thanos.

Black Panther is in theaters now.