Fans were pretty surprised when The Walking Dead released a 5-minute long trailer at their San Diego Comic-Con panel. It was probably the longest one that they’ve ever released and there was definitely a lot to digest. I decided to dig into the trailer and see if I could find any clues as to what we can expect for the show’s 8th season. I also found some pretty fun easter eggs as well!

**Now, I am not a comic book reader so this is a “comic-free” breakdown. However, I am going to make some guesses based on what I find, so there’s a possibility that those could happen down the line on the show. So, I guess this post has potential spoilers? Read at your own risk!**

So the trailer starts off with Negan and Gabriel. Since Gabriel was not captured in the season 7 finale, we can assume that at some point during the first half of season 8 he will find his way to the Sanctuary. Negan kicks off the trailer by saying “I hope you got your shittin’ pants on” and it seems to be a subtle callback to “pee pee pants city” from his season 6 introduction. Also, if you recall Gabriel wasn’t there that night so that’s probably why he’s all like “huh?” when Negan says this to him.

Carl looking into the car was an almost identical shot of Rick from the pilot episode. Since 8×01 is The Walking Dead’s 100th episode, I would expect to see a lot of callbacks throughout it. 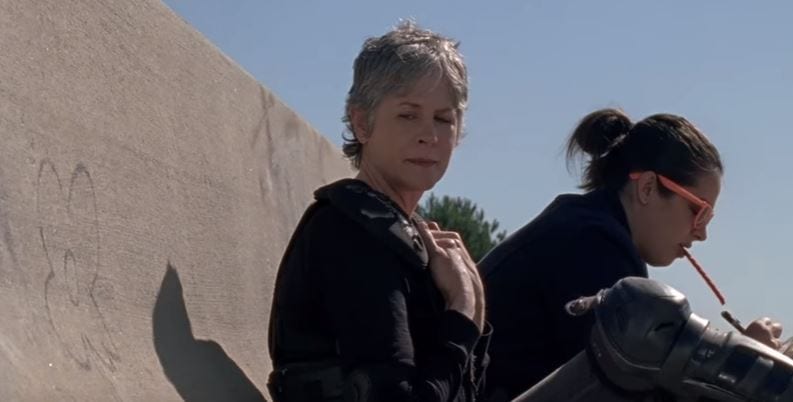 Tara and Carol are clearly on some sort of look out or watch here. We see later on in the trailer that they are actually on an overpass waiting for a herd of walkers to pass, but what I find most interesting is Carol. She’s looking at this graffiti flower, which as we know is a huge mean of symbolism for her character. Could she be thinking about her Cherokee Rose, Sophia? Or perhaps “look at the flowers” Lizzie? 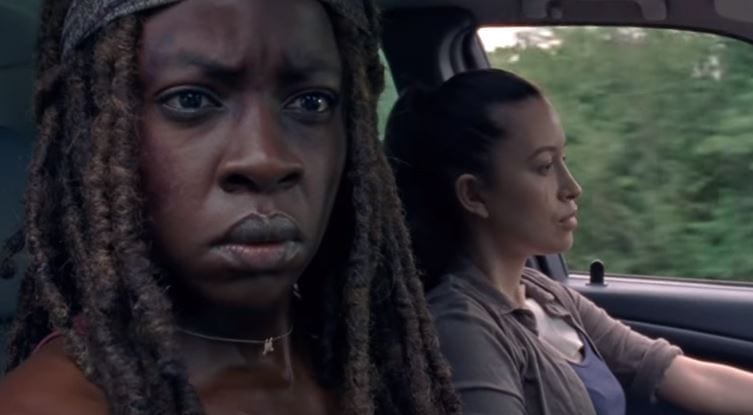 Rosita and Michonne appear to be going on a mission of their own in this trailer. Either that or they’ve been partnered up to carry out a small role in the team’s bigger plan, but everyone else appears to be in big groups. 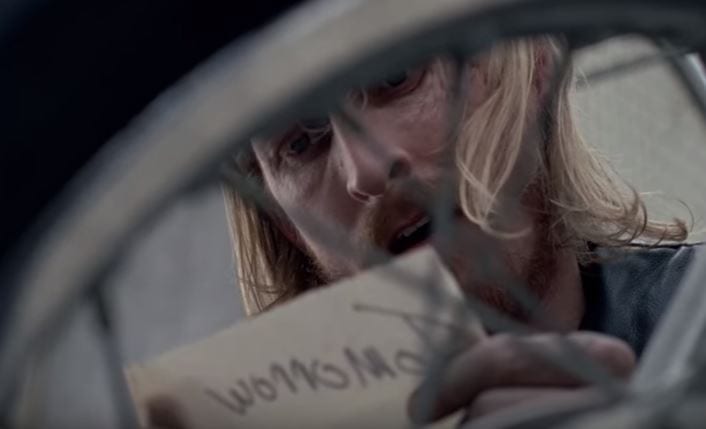 I think this is a message from Daryl telling Dwight that the group will be attacking the Sanctuary compound “tomorrow”.

While it’s still hard to trust Dwight or know where his loyalties actually lie, he did leave Daryl a very similar message in the Season 7 finale letting him know that he didn’t know about Negan’s deal with The Scavengers. It’s their cute way of passing notes to each other.

I just thought that this was a super cool shot, especially when Carol pops her head out at the end. I can’t really gather where she is, but it looks like it’s some sort of laboratory. Could also be part of a Savior compound.

There’s a really quick shot of Daryl holding a gun that has 43 markings on it, presumably kills. It’s not something we’ve ever seen on the show before so I’m not quite sure it has anything to do with the Saviors, but maybe it belongs to another group who doesn’t take killing humans lightly, which to me, sounds like a group our people need. 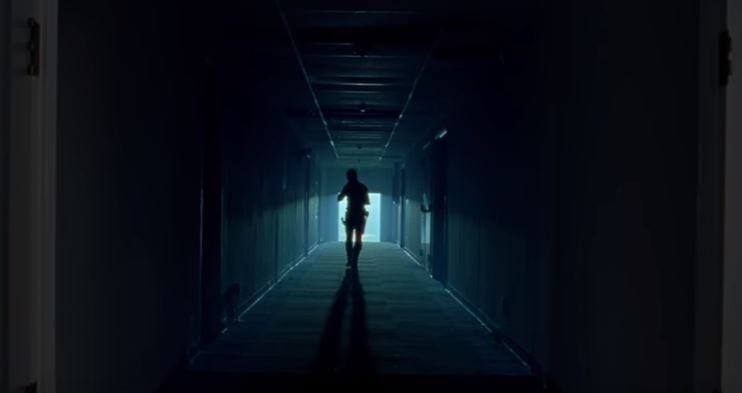 This just reminds me of Rick walking down the hospital hallway in the pilot. The hinges on the door on the left and right-hand side lead me to believe that this is inside the Sanctuary somewhere. I’m not entirely sure why he is on his own, perhaps he is looking for Eugene or Gabriel? 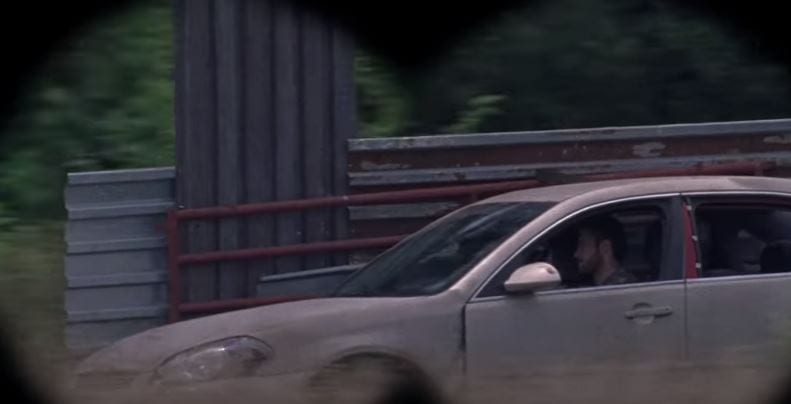 There’s a quick shot of Aaron driving with this huge gated shield attached to one side of the car, which looks pretty bad ass, and as we later see, a much bigger part of their plan to attack the Sanctuary. 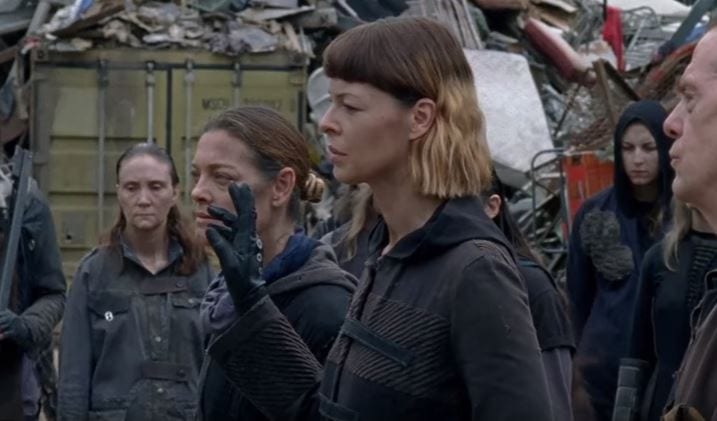 The most important thing to take away from this screen grab right here is that yellowish crate behind Jade. 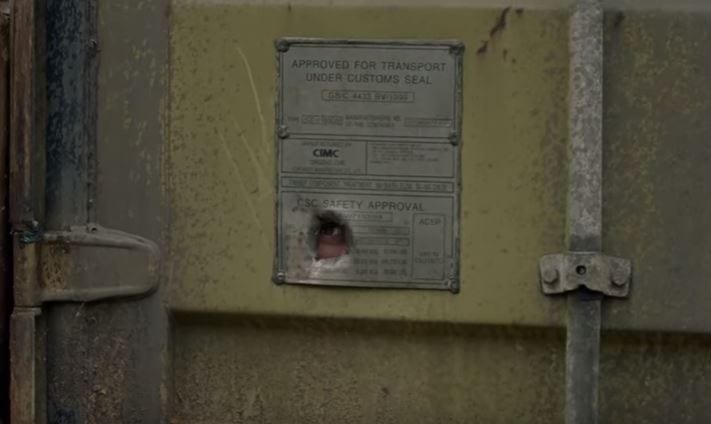 Because in the next scene we see someone’s eye looking through one of the bullet holes on it. 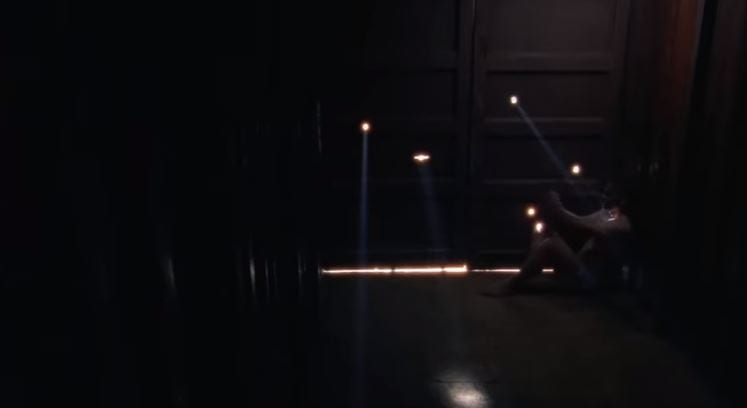 Then later in the trailer, we see who is presumably Rick inside that very same crate, which means that at some point Rick will be captured by the Scavengers because they are literally the worst. Guess they are a little smarter than the Termites though because they took all of his clothes and any potential to make his MacGyver weapons.

Here’s another shot of the guarded cars. I thought they were going to be meant to stop bullets, but now I’m thinking that they are going to be used to trap walkers. More on that in a bit. 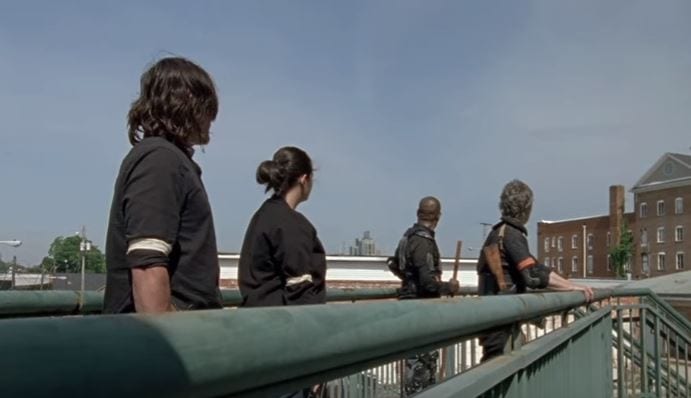 Then we see Daryl, Tara, Morgan, and Carol all at the Kingdom, but if you look where they’re looking you can see just how close The Sanctuary actually is to Ezekiel’s home base, which I had never realized before. They’ve also got these new armbands to help distinguish what community they’re a part of. White is for Alexandria and Orange is for the Kingdom.

I had to rewatch this scene a couple of times and really look, but this is definitely one group leading a bunch of hostages or prisoners. I think on the right-hand side in the front you can kind of make out Jesus, who we later see was on a mission with Morgan, so I believe that they were able to take whatever building they infiltrated and take some of the Saviors. Now, there’s another group led by Maggie, which may not have fared as well, so perhaps this is some sort of exchange? 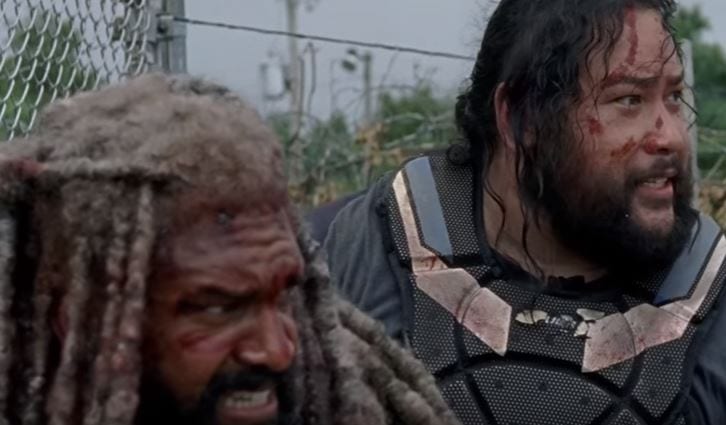 Jerry and Ezekiel are at the Sanctuary and share a touching moment that better not lead to Jerry’s death because that would be so uncool. 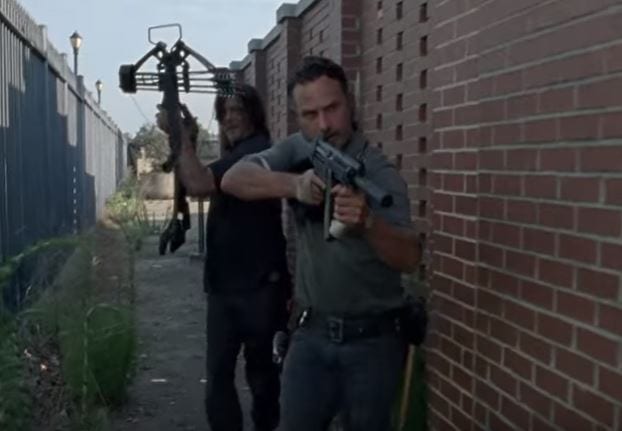 The boys are back! Is there anything better than seeing Rick and Daryl in the field together? 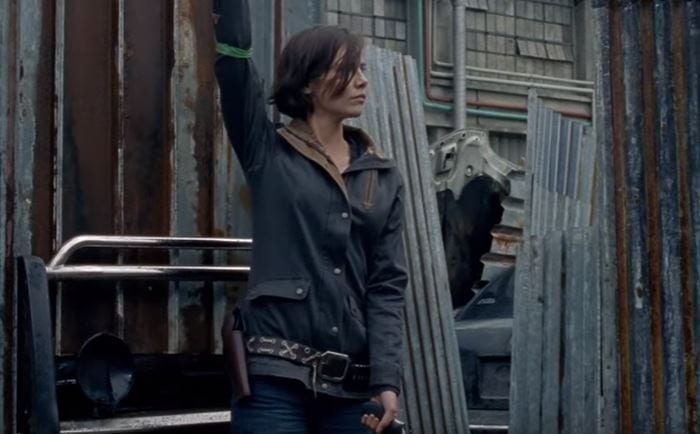 Maggie is leading the attack on the Sanctuary I’m pretty sure, which is also where the cars are as you can see behind her. They’re using them to set up some sort of blockade. It’s great to see her stepping up into this badass leadership role, but isn’t she supposed to be pregnant? Also, notice that she has a green armband for the Hilltop.

Jesus and Morgan are leading their group somewhere. Perhaps it’s another compound like the one the group infiltrated a couple seasons ago?

Jesus and Morgan also have another quick scene where they’re about to fight. I’m actually looking forward to watching these two square off because they both have such awesome combat skills, but this also could be them just getting some practice in before the battle…building up some trust before they head into the lion’s den. 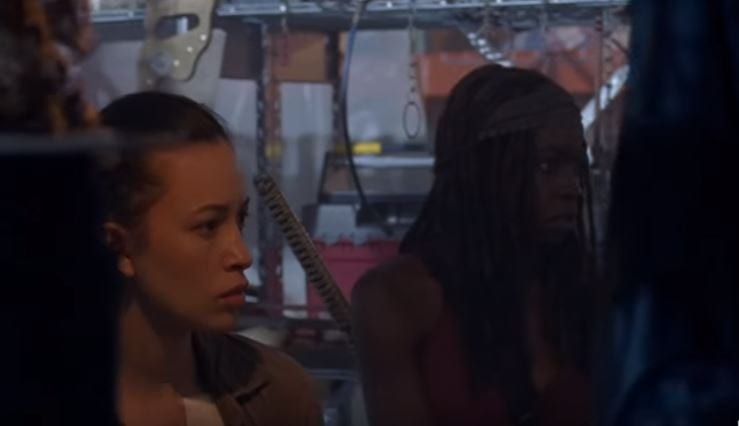 You quickly see Rosita and Michonne in some sort of room. It looks like tools or something hanging in the background. It could be the market at the sanctuary, but I don’t really have many guesses as to what these two are up to. Maybe getting supplies for bombs?

Shiva is surrounded by walkers and I DO NOT LIKE IT. Not okay.

Before getting to my next point I would like to point out that Daryl spends almost the entire trailer just blowing shit up.

Okay, so if you listen closely to Aaron here you can really get a sense of what their plan actually is. I think that Daryl is luring walkers to the Sanctuary with the fire bombs, and our group plans to use the shielded cars to trap them inside, making it nearly impossible for the Saviors to get out. The only thing I worry about is that I do not think that Jesus is in this group and I think that he’s the one whose group fares better out of the two. I also included a totally awesome shot of Jerry putting his axe to good use. 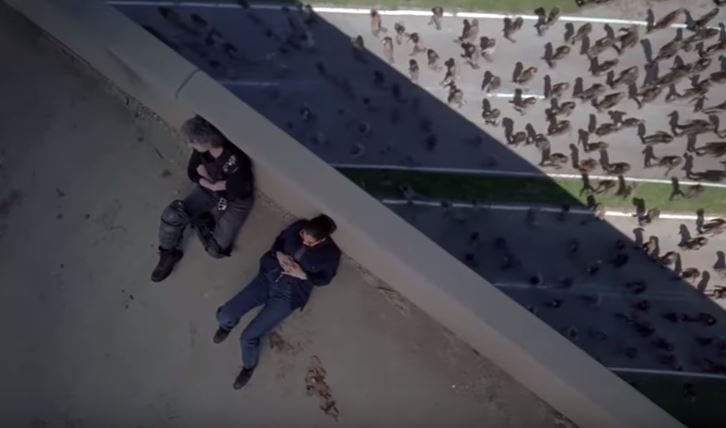 And here’s a quick glimpse at the herd of Walker’s that Daryl is most likely bringing to the Sanctuary.

At one point Morgan says this. I’m sure it’s out of context,  but saying something like that on a show like this means you will probably die.

This scene basically confirms that Rick does end up in the sanctuary. If you look in the red circle you can see a bunch of stuff and things that a Savior would definitely have. Rick seems to have a pretty good handle on the situation, and I think that we can assume that he is probably looking for Gabriel if he was in fact captured. 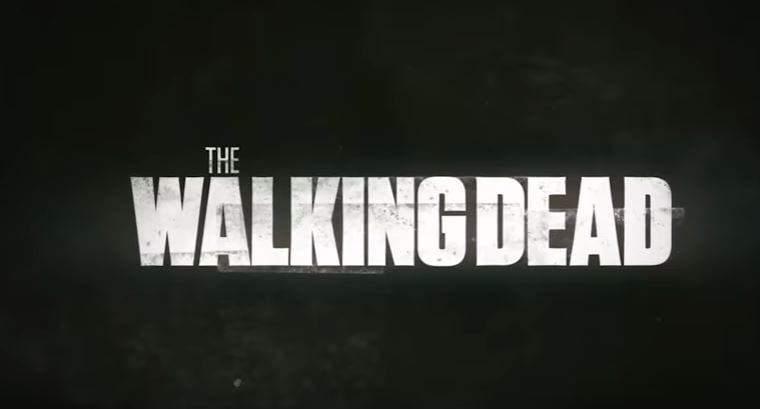 There are a few more qiuck little shots, but I didn’t seem much more of importance. Then, the screen cuts to the credits. As you can see and also probably noticed, The Walking Dead  title is way out of pattern for what we would expect going into season 8.

Every season the opening title has decayed a little more than the season before, but for Season 8 they’re fresh and they’re white. Could that mean a new beginning for our group? Sure, this is subject to change come Season 8’s opening but for now, I think that’s a pretty cool change up.

Then we are treated to the big shocker to the trailer – Old Rick. I literally had no idea what to make of this. Like I said, I’m not a comic book reader and have no idea if this is something that happens in there. The only thing that I can think is that this is some sort of vision that Rick is having, very similar to the one that he had of the family dinner last season. It’s also a great callback to the pilot when he opens his eyes in the hospital bed. 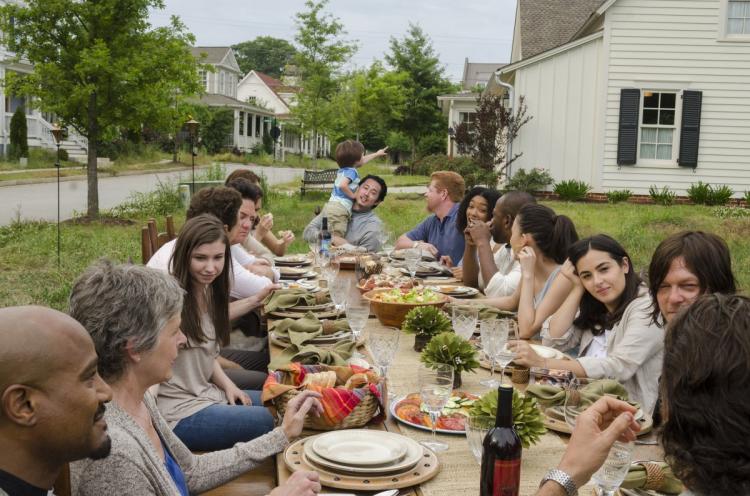 What do you think of the Old Rick scene? Are there any big things in the trailer that I may have missed? Hit me up in the comments!