If you left last week’s Legion season premier wondering if David had maybe struck an allegiance with the Shadow King, the very creature that haunted him all of season one, then “Chapter Ten” immediately went out of its way to dissuade you of any confusion you may have had. David has indeed struck some sort of agreement with the Shadow King, who is walking around in control of Oliver and his sidekick Lenny, and it all seems to be Syd’s fault… Well, Future Syd. This is part of the beauty of Legion. “Chapter Nine” presented a number of huge questions and ideas that seemed to lay down the foundation for the upcoming season. Then we get to episode two and a large number of those questions get answers and a new set of questions and issues arise. Legion doesn’t care what you think of storytelling structure. Everything hangs on the edge of madness and Noah Hawley not only relishes in that method of storytelling but it’s his way of keeping the viewer involved, fully immersed, in the narrative he’s weaving. 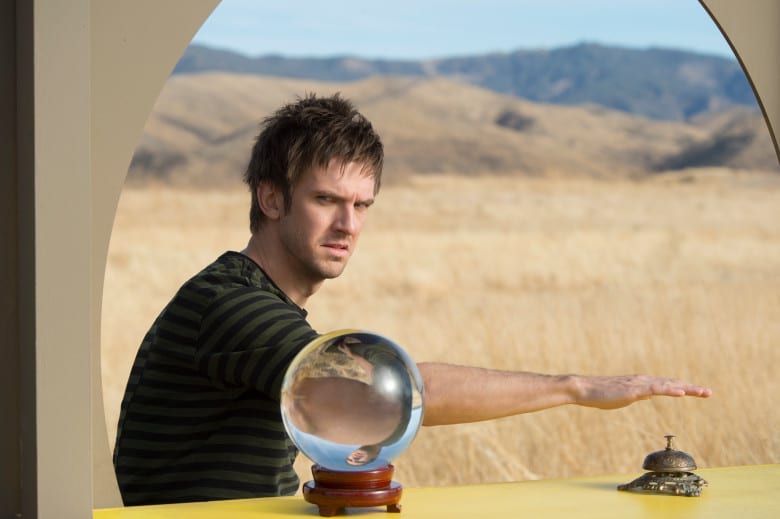 Yes, David is working with the Shadow King because Future Syd told him to. Farouk needs his body back and apparently stopping him from doing so causes some sort of apocalyptic scenario and destroys the future. I’ve got a theory about this but we’re not there yet. This allegiance isn’t an ideal situation for David but he trusts Syd, both present and future versions of her, which makes his decision kind of a no-brainer. Here’s a character who doesn’t trust himself but is willing to believe all versions of the woman he loves. While David takes Division III and the Vermillions, the triplet mustache ladies, out to a field, Oliver and Lenny make their move on Division III causing a whole bunch of ruckus. We see guards turned to dust, children soldiers scared away, Oliver whispers what I can only assume is madness in the ear of Melanie, and Cary and Kerry have been literally turned inside out. What easily seems like an overt attack on the enemy is actually something a little more complex. Farouk is getting closer to his body and he believes that Division III is holding one of the keys to finding it. A monk.

Waaaaaaay before Charles Xavier defeated the Shadow King, something that was mapped out during “Chapter Seven” I believe, there were a group of monks who also battled Farouk. It was these monks that defeated him and stole his body. Since that day, long ago, this particular group of monks has become all but extinct but there is one out there. One who possibly holds the secret to the location of Farouk’s body. You may recall him as being the bald guy walking through the club in “Chapter Nine” right before the dance battle. He is clearly what drew Lenny and Oliver to the club and the giant dance-off prevented them from getting their hands on him. Their attack on Division III yields the same results as they leave empty-handed.

David is not pleased with the amount of violence, and death, caused by his new partners and quickly takes offense to their methods but before he confronts Oliver/Lenny/Farouk he needs to be questioned by Division III who think there’s a 67% chances that he’s lying. They’re not exactly wrong either. As David explains to Syd later in the episode, he’s withholding a certain amount of information but we can argue that he’s still trying to make night and day of what exactly is happening to him. David feels like he’s been gone a day and is in a world that has moved on almost a year. There is a great deal of catch up that needs to be done. Throw in the fact that his mind is all types of fractured, there were a number of scenes with combative inner voices, and one can believe that just because David is free of the Shadow King doesn’t mean he’s healed.

It’s David’s inability to fully grasp the things happening around him that make him so dangerous this season and possibly easy to manipulate. We’re only two episodes in but at this point I have no idea who we should be trusting. I know that I don’t trust Division III who seems like they want to maybe harvest the power of the Shadow King for their own. If they couldn’t get David then why not get the next best thing? Melanie isn’t doing well at all this season having lost Oliver again and her telling David to take Syd and live his life, while good advice, may not be best for the world considering the impending apocalypse. Present day Syd seems trustworthy, I have a soft spot for this character, but I would like to know why she keeps switching bodies with a cat. Then there’s Future Syd who I trusted last week but this week… not so much. 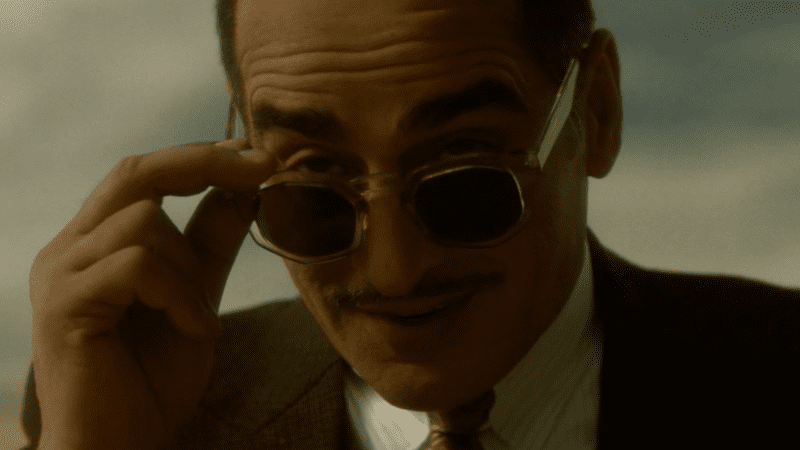 David, looking for more answers, jumps into the Minority Report tank to head to the future to get more information from Future Syd, and she delivers. Still sans an arm but with a voice Future Syd explains to David that things got worse after the Shadow King was destroyed. She also informs David that in about a week he’ll be responsible for bashing in Farouk’s head himself. This death will bring about something worse though. Something that will wipe out most things forcing everything else to go into hiding. David inquires about what this could be but Future Syd doesn’t get into it. Instead, she focuses on vague commentary like how it’s been a while since she’s seen David like this, and I believe she uses the term happy. This forces David to inquire if he’s dead in the future and only to get a response of “it’s complicated”. That, in turn, has me ready to make a theory.

What if the thing in the future that wipes everything out… is David. Think about it. Future Syd never confirms his death and never gets into what exactly is out there killing everything. Is it possible that the killing of Farouk drives David further into madness? Without the Shadow King, what is there to keep David sort of balanced? With no Shadow King to hunt is it possible that David could lose control of his purpose and thus lose control of his powers causing all types of doom and gloom? Maybe Future Syd is indeed there to save David from his future not just the future of the world. This all could be an act of love to protect “her man” even if it means making friends with the enemy.

All of this begs the question, what’s the endgame? How can Farouk even be trusted? Chances are he can’t be but that doesn’t stop him from trying to persuade David. The two meet out in the same field that David lead Division III to and have themselves a bit of a sit-down. This is our first time meeting the Shadow King in his true form and he’s charismatic as hell. Slipping in and out of English and explaining to David that the two of them are gods. “Bigger than Jesus” even and that they’re in control of all of reality, introducing the idea that everything that is happening is just a construct of David’s mind. Their conversation eventually leads to a mental amateur wrestling match, like most conversations between massively powerful telepaths do, and ends in a stalemate. David agrees to help Farouk providing he stops killing. After some reluctance Farouk agrees and the two part ways with a new agreement. David will help find the monk and once the Shadow King has his body he will owe David a huge debt. Could this be what David cashes in to prevent the future? Seems most likely.

Some quick thoughts before I leave you guys for the week-

There you have it Geeklings, while “Chapter Ten” didn’t really further the season two narrative a whole bunch it did provide us with a great deal of substance, answers, and new questions to chew on. I’ve talked enough though. I’m going to turn it over to you guys. What did you think of this episode of Legion? Who do you trust? Is Farouk still playing David? Is David the problem of the future? Sound off in the comments. If you’d like to talk more Legion you can find me on Twitter @iamgeek32. See you all next week and remember reality is a choice…