Last season on Legends of Tomorrow:

The Legends started the season by doing what the do best: Messing things up but still managing to save the day.

After the destruction of the Occulus in Season 1, there are no more Time Masters. Rip had taken it upon himself to “police time,” so he and the Legends travel through time and tackle Aberrations, which are points in time that have diverted from their original path. There seems to be quite a lot of them, and it turns out that someone is intentionally messing with time. The Legends were warned not to travel to 1942, but there is such a strong time quake, they are forced to go. Things get even worse than normal and the Legends are scattered throughout time following their retrieval of an active nuclear bomb.

Nate Haywood, a present-day historian, has noticed more and more accounts of these “Legends” popping up throughout time and takes his

findings to Oliver Queen, believing the Legends to be in serious trouble. They find the Waverider at the bottom of a river with an unconscious Mick Rory aboard. Mick recounts what happened when they went to 1942, then he and Nate set out to find the others. Once back together, they play a message from Rip, who tells them that he was forced to send them all away and that he hopes to one day see them again. The Legends retrace their steps to 1942 and are met by the Justice Society of America. After the murder of Rex Hunter by a speedster, Amaya Jiwe, aka Vixen, stows aboard the Waverider, believing that they know who killed her teammate.

As Season 2 unfolds, Sara takes on the mantle of captain as the Legends continue what Rip started and fix Aberrations. They start getting more and more serious as its revealed that Eobard Thawne and Damien Darhk are the ones pulling the strings and screwing with history. They recruit Malcolm Merlyn along the way and christen themselves the Legion of Doom. The Legion’s mission is to recover the Spear of Destiny, which has the ability to rewrite reality. The keeper of said Spear? Rip Hunter.

The second half of the season features a pretty intense showdown between the Legends and Legion. The bad guys get to Rip first and brainwash him, making him believe that the Legends are the enemy. Rip even goes so far as to kill Sara (but thank goodness Gideon was able to bring her back).  The Legends get Rip back and the race to recover the pieces of the Spear begins. Turns out that Rip broke the Spear 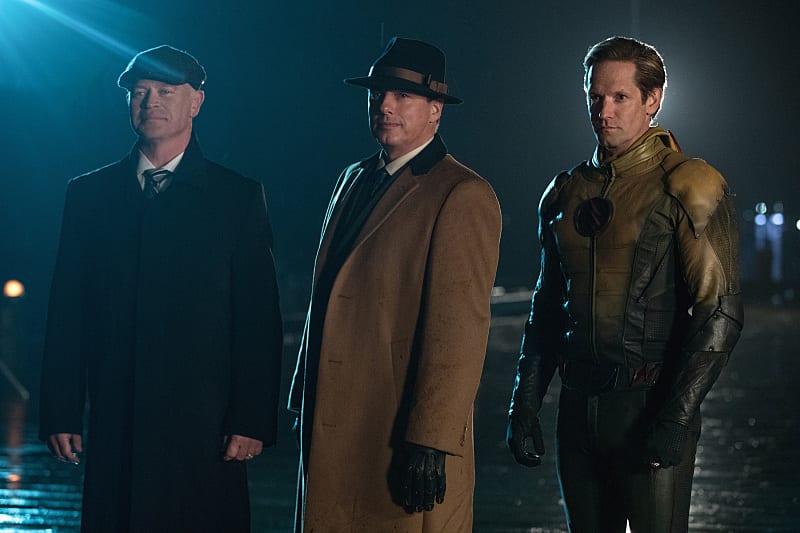 apart, entrusting each piece to a member of the JSA before scattering them throughout history.

The Legends actually succeed in reuniting all the pieces of the Spear, but the Legion is hot on their trails. The only way to destroy the weapon is with the blood of Christ, which is buried smack dab in the middle of a No Man’s Land during World War II. The Legion, with new member Leonard Snart in tow, meet the Legends on the field of battle. Mick, who was sent reeling at the return of his partner and feeling like he isn’t valued by the team, betrays the Legends and turns the Spear over to the Legion. Thus, reality is rewritten, and we find ourselves in Doomworld.

The Legion is in control, but Mick realizes his mistake and is determined to make things right. He restores his team’s memories, and together, they go after the Spear. Eobard had been busy building a mechanism that would destroy the Spear and if he succeeds, Doomworld would become permanent. A fight breaks out and once more, the Spear ends up in Mick’s hands. He refuses to hand it over to Leonard, passing it to Amaya, who starts to recite the incantation. Leonard kills Amaya. Eobard speeds through, takes the Spear and drops it into his machine, incinerating it.

The season finale finds the Legends doing exactly what they have always been forbidden to do, go back to a time they have already visited. They return to when they were going after the blood of Christ. Ray goes after the blood, but Eobard appears and rips his heart from his chest, then shatters the vial of blood. Their next plan is to steal the Spear from themselves, but fail (because that’s kinda what they do). Some pretty serious time quakes start happening as reality is about to ripped apart. While trying to escape the Legion, the past Waverider is damaged, so the Saras come up with a plan to get to the Doomworld Waverider so their past selves can get away.

The fight between the Legends and the Legion is a pretty intense one and all members of the Doomworld Legends die except Sara. In the end, Eobard shows up with hundreds of copies of himself, telling the Legends that there is no way to win and Doomworld is their future. Sara tries to pass the Spear to Amaya and get her to right everything, but Amaya says that she can’t do it. Sara has to be the one. Sara recites the incantation and is transported to a living room with Laurel. Despite her own desire to rewrite reality and bring Laurel back to life, Sara can’t do it. She returns to the present time and the Spear is stolen by Eobard. He tries to use it, but nothing happens. Sara changed reality and made it useless. Then, since Eobard is nothing more than a time remnant, that which he has been running from finally catches up to him. Eobard is erased by Black Flash.

Reality has been saved so the Legends decide that it’s time to take a break. Before heading off to Aruba, Rip leaves the Waverider to Sara, telling her that she is a more than capable captain. The Legends are off, but naturally, they are knocked out of the time stream to crash in modern day Los Angeles. But everything is wrong. Because the Legends met themselves and broke the rules, they broke time itself.

Season 2 of Legends was certainly an improvement over the first in that there was a clear goal for the season. Legends also fully embraced its role as being the outlandish show in the Arrowverse, giving us episodes that were crazy, ridiculous, and just plain fun. I really enjoyed the entire season and there wasn’t a single episode that I didn’t enjoy. I’m excited for what Season 3 is going to bring to the table, and I know it’s going to be even more crazy than Season 2.

Legends of Tomorrow returns Tuesday, October 10, on The CW with the episode entitled ‘Aruba-Con.’