Sitting at a quaint little table at the Stardome Comedy Club in Birmingham, Alabama on a Wednesday night was just what this writer needed. Let me give you a little back story first on why I wanted to start this blog. The year was 1994 and I found myself sitting at a similar table at the OLD Aladdin Hotel in Las Vegas in a comedy club watching an up and coming comedian that I had never heard of. The comedian came on stage with a suitcase and he pulls out this monkey looking thing he called Peanut. Many years later and (Jeff Dunham) is a name everyone knows. Well, my love of comedy, my love of making people laugh and my love of making someone smile is why I wanted to start this blog. The great folks that the Stardome Comedy Club have been awesome in allowing me to do just that. 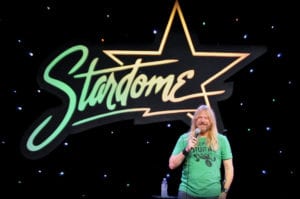 Last night, I got to watch (Steve McGrew) on stage and my sides hurt from laughter. He covered topics from his love of the Dollar Tree to Hot Pig Sex (yeah you kind of have to hear him tell it). I must say he could have possibly discovered the cure heart failure and his love lessons are based on his life on the farm and animal planet which kind of scares me for his girlfriend. We even had the same experience with a father who could rip off his belt like he was Zorro in one swift motion when we were did something stupid. (For the record dear reader I rarely did stupid things as a child, however as an adult well that is another story.)

After his set, Steve sat down with me and we talked about his career and what he has coming up in the future.

My first question was about his background and how he got into stand-up comedy. Steve actually started as a cartoonist for a Houston Newspaper but his friends encouraged him to try stand-up comedy which he did and has been doing it ever since. Steve actually thought about going back to the cartoonist field however his friend Sam Kinison encouraged him to stick with it and luckily for us he did.

I asked Steve who gave him his first break in the business and his reply shocked me. “Actually, Steve Schirripa who played Uncle Junior’s Bodyguard on The Soprano’s gave me first big break.”

I was curious as to who he considered a mentor or looked up to in the business so I had to ask. Steve had mentioned earlier that (Sam Kinison) had encouraged him to continue on with comedy. He said, “Sam was a big supporter.” Steve said: “I really looked up to Jonathan Winters. I would watch ‘The Jonathan Winters Show. and just be amazed at Jonathan’s ability to pick up any object and work his improve comedic genius magic. I would go around my house just picking up things and work on my improve skills.” 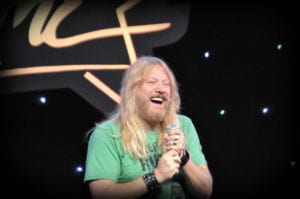 I asked about past projects he had worked on. He has a re-occurring role at the MGM in Las Vegas during NFR week. He also was an opening act for Dolly Parton which he also portrayed Elvis and even performed Hound Dog on stage with Dolly.

When I asked what advice he would give young comedians he said “always write everything down. If you think of something funny write it down because if you don’t you will forget it and you may never get it back”. He also added this piece of advice “always have twice the amount of material you think you will need. If you have a 10-minute slot then have 20 minutes of material prepared because you never know what you will be able to use once you are on stage. Every audience is different and you will never know what will work or not”.

We wrapped the interview with what Steve has going on right now and in the near future and of course he is doing his comedy club tour but he is also working on his YouTube Channel and other social media sites. We talked about this for awhile so at the end I will post them so you can check them out for yourself.

I truly enjoyed my time with Steve McGrew after the show. He was so nice and warm and a delight to interview. I learned a lot about the behind scenes stuff I had always wondered but never had the chance to ask but those I asked off the record so I can not share them sorry dear readers. I urge you to check your local comedy club or keep an eye on on Steve McGrew’s social media outlets and see if he is coming to a town near you… 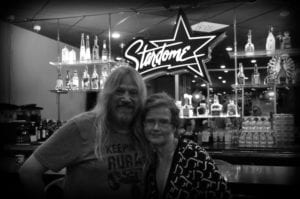