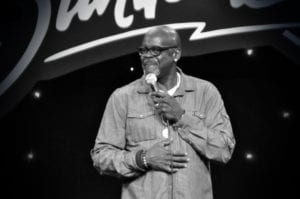 Welcome dear readers to another installment of ‘Laughter Really is the Best Medicine’. It has been a few weeks with life being busy and the holiday season rapidly approaching, however, I joined my friends at the Stardome Comedy Club in Birmingham, Alabama and caught the act of comedian Skip Clark. After an evening of laughing, I sat down with Skip to learn more about him and his stand-up comedy career.

Skip Clark was born and raised in the Bronx. Skip got a scholarship to The University of Tennessee where he had the opportunity to even play basketball against Michael Jordon. Skip worked behind the scenes in the stand-up comedy world working with New Wave Booking Agency and other areas however it was on a dare that he tried his hand on stage at the Improv Comedy Club in Kansas City, Missouri. From there he knew that is what he was meant to do. Skip is married to his manager and together they have 9 children and live in California.

Skip Clark has also made his way onto the big screen starring in movies such as “Recruitment Day” which is a comedy spoof of ‘Training Day’ and ‘The Next Big Thing‘ which was produced by Kenneth “Coach” Carter. Kenneth “Coach” Carter is the person that Samuel L. Jackson portrayed in the motion picture ‘Coach Carter‘. He is also working on a Netflix project as well. 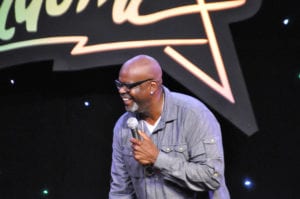 I asked Skip a few questions that I am always intrigued to learn from the comedians I interview. First, I asked him what is the best part of being a comedian? Skip was quick to reply with “the rush you get right before you are about to go on stage”. He said, “it is a feeling you cannot get just anywhere.” I also asked what advice would he give a new comic who is interested in the career of standup comedy. “Get on stage as much as you can” he replied. He explained that it was critical to get that stage time even if it was just a few minutes at a time. 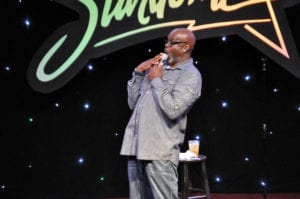 I truly enjoyed his stand-up act, he was funny, entertaining and handled the audience with a grace of a long time professional even though he has actually only been doing it for about 12 years. If Skip Clark comes to your area comedy club I would make plans to join him. Keep an eye out for that new Netflix project as I am sure it will be just as funny as he is.

You can follow Skip on his social media on https://www.facebook.com/SkipClarkComedian or on https://Twitter @Skip_Clark and his webpage https://www.comedianskipclark.com

Laughter Really is the Best Medicine with Comedian John Jacobs

Laughter Really is the Best Medicine with Comedian J B Ball

Laughter Really is the Best Medicine with Comedian Steve McGrew