Welcome, Dear Readers! ‘Laughter Really is the Best Medicine with’ is series I started because of my love of comedy and my pursuit to help people laugh just a little bit more. I am a Suicide Awareness Advocate and with this series, I want to help people who may be struggling with depression to laugh just a little bit. So, I wanted to highlight comedians as they come through my area. There is something so therapeutic about taking a night with friends and family and going to your area comedy club and just enjoy so good old fashion standup comedy. If you are depressed or worried just getting away for those few hours the comedians give you a reprieve from that. I also believe with a 100% of my heart that laughter truly is the best medicine. My friends at the Stardome Comedy Club in Birmingham Alabama are awesome with helping me this series and all the awesome comedians that allow me to share with you guys a look at their lives, careers and talent. 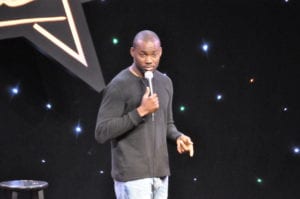 This week I sat down with comedian J. B. Ball. We first caught his act two nights in a row but his stand up was so amazing it was almost like watching an entirely different show. That impressed me because I know some comedians tend to stick strictly to their act and don’t change it up. I loved his take on what makes the Disney Princesses such a catch because they all tend to come with a lot of baggage and drama that I don’t care how pretty they are it just wouldn’t be worth it. I was excited to sit down and learn more about him.

My first question was how he was when he decided that he wanted to be a comedian. He knew at the age of 6 that he wanted to be like Dave Chappelle. At the age of 17, he actually was suspended from school for over a week because of a misunderstanding. He was doing an impression of Dave Chappelle, however, a teacher walked by at the wrong time and he got a little vacation from school. His answer to this question also answered another of mine which was which comedian did he look up too.

I really wanted to know as an upcoming comedian at what point or moment would he feel that he has “made it”. J.B. replied: “To sell out a venue that they are just to see me”. For comedians, most of their careers are played out on the small stage with everyone having dinner, drinking and a very limited number of seats. For the ultimate sign of success is to have a venue that everyone is there just to see the comedian. They didn’t come to have dinner or drinks they came just to watch the comedian’s act.

J.B. has been doing stand-up across the country for several years. He has been on Comedy Central. He was part of Kevin Hart’s show Hart of the City. He was the “New Face” at the 2016 Montreal Just for Laugh Festival. He won the 2014 Trial by Laughter Comedy Festival. He had won many awards and honors. 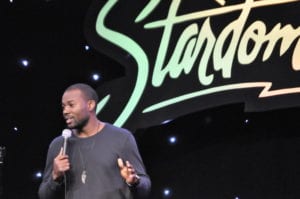 As for his future, J.B. is looking to “Go Big or Go Home” (This is part of his stand up so I thought I would throw it in here). He has been doing auditions for movies and television as well as working on his dream of selling out that venue like we talked about earlier.
I have no doubts that you will be hearing the name J.B. Ball. Please check out his social media pages and see if he will be performing at a comedy club near you.