I’m just going to say it – Cole Sprouse is one of the best parts of Twitter and if you aren’t following him you are absolutely missing out. Take this tweet for example:

Photographer captured a photo after they told me I was beautiful. pic.twitter.com/lUQ54HKpSJ

Whenever he tweets two things tend to happen. One, we are blessed with a glorious thought or piece of advice.

If “feet” isn’t the top auto suggestion after your name in google you’re not famous.

When deciding whether or not to do something bad, stop and ask yourself “what would Flat Stanley think?”

Two,  a faint sizzle will be heard by all on behalf of whomever he just burned. Sometimes he’s trolling himself.

I’d like all of you to know that our grandma used to put @dylansprouse on a baby leash. I’d also like you all to know that I never needed it

He’s even done it to his own show. Literally, no one is safe. 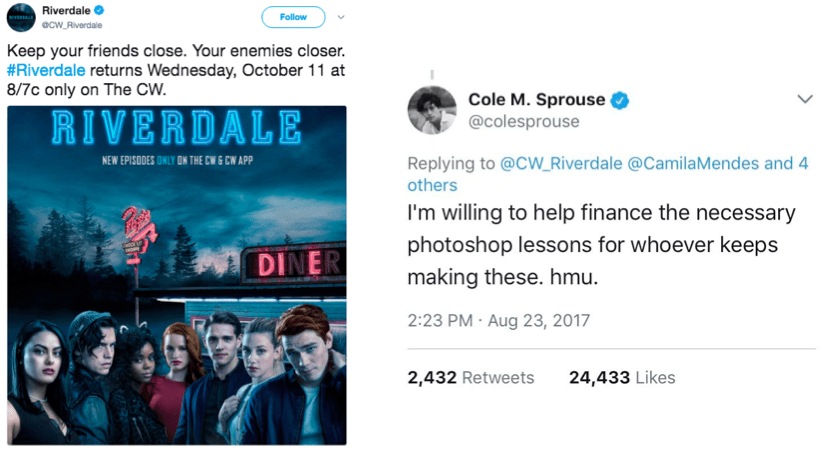 The latest chapter of Straight Savagery by Cole Sprouse came this past Sunday night when Cole’s Riverdale co-star and buddy KJ Apa tried to come for him on Instagram. Apa shared the meme below with the caption:

“Man… I would have absolutely crushed you at age 17. Crushed. @colesprouse.”

While Apa successfully completed a hilarious troll, he forgot one thing – you should never come for Cole Sprouse and not expect to be dragged yourself. He clapped back with this:

Fans of a pre-Riverdale Sprouse will instantly understand his witty comeback, but for those who don’t, Sprouse was referring to his days as a successful child actor including roles in Friends, Big Daddy and Disney Channel’s Sweet Life of Zach and Cody. Basically, he may have looked 12 at age 17 but unlike Apa, he was making the big bucks.

Sprouse and Apa’s Riverdale co-stars didn’t miss the opportunity to chime in either.

Man… I would have absolutely crushed you at age 17. Crushed. @colesprouse pic.twitter.com/nLlQC5FgGm

He was, once again, immediately dragged by Sprouse.

Having played best friends Archie and Jughead on Riverdale for two seasons, Sprouse and Apa have formed quite the bromance themselves and are often handing out hilarious jabs on social media. Sometimes Apa comes out ahead:

But in this case, Sprouse was the clear winner! Riverdale is currently on hiatus but the series was recently nominated for a whopping 12 Teen Choice Awards including Choice TV Drama so we can expect to see the whole gang back together at the show on Sunday, Aug. 12 on Fox.  Now, please excuse us while we go binge season 2 of Riverdale on Netflix!