Rumors and chatter surrounding a Mallrats sequel have been happening for quite a while however, it has been well over a year since we have heard anything substantial.  That all changed when Kevin Smith called into The Preston and Steve Show on WMMR radio in Philadelphia.

Smith explained that a sequel had, in fact, been in the process for a long time however, they ran into problems with Universal Studios and the production of the new script.  Smith explained:

“I wrote my script, put everything together, and then I was like, ‘I’m ready to go. Do I have to reach out to Universal for approval or something? Or let them pass or whatever?’ And he’s like ‘Yeah, we have to submit the script.’ And I’m like ‘Why do we have to submit the script?’ And he says, ‘Because they own the property and it’s a formality. It’s gonna be fine.’  So we submitted the script, and my agent comes back to me and he goes, ‘Well, apparently Universal has never let a catalog title go. Any title they own, they’ve retained. They’ve never done something where they’ve been like, oh, you can take it back and go make a sequel. Never in the history of the studio.’ And I was like ‘Wait, you told me that was one of my options.’ And he said, ‘Well, apparently I was wrong. So right now there’s two options, you make it fully, the studio finances it or you co-finance it with the studio.’” 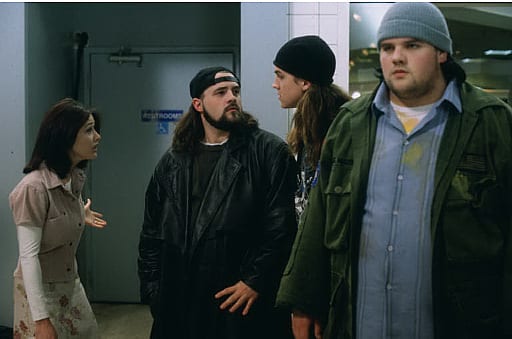 This left Smith and the fate of Mallrats 2 in a bit of a bind.  What exactly was he supposed to do now?  Smith says that, in addition to his trouble with the studio, there were questions as to why a sequel was to be made in the first place.  Mallrats didn’t exactly dominate at the box office back in 1995 and now, 20 years later, where is the demand for a sequel?  However, Smith explains, thanks to his work directing on CW’s The Flash, he’s found a whole new inspiration for the Mallrats universe:

“I went and directed an episode of The Flash last season, I loved doing it, I get to go back in August and do another one. But when I went up there, that was kind of a weird game changer in my career. Apparently that’s like the best work I’ve done in a long time. Not just the internet but the press were like ‘This is the best thing he’s ever done.’ So I felt at home in the medium…. While I’m in that world and space, a couple months ago, we started reconfiguring the idea of doing Mallrats not as a film, but as a series. Universal and I are just about to close our deal to do Mallrats the series, and then we take it out into the world and find a home for it. So instead of doing a Mallrats movie, I’m gonna do 10 episodes of a Mallrats series.”

How exciting is that?!  A 10 episode series of Mallrats coming soon to a TV near you!  No word yet on when production may start, what network will air the series or when it may premiere but, Smith has already scouted some locations for filming and found the below location last fall.

Stay tuned to Fan Fest News for more updates on the TV adaptation of Mallrats as it becomes available.

What do you think about a Mallrats TV series?

We found our MALL, y'all! This January, @ExtonSquareMall in Exton, PA will star #Mallrats 2! Thanks, StarStream! #MR2 pic.twitter.com/5zD4cAo9YR