In her new book Live Wire, Kelly Ripa reflects on the ups and downs of her relationship with Regis Philbin. The Live With Kelly and Ryan host comments on her early days at what was then Live With Regis and Kelly in her new book Live Wire: Long-Winded Short Stories, telling PEOPLE that the portions about her late co-star were the “hardest” to write.

She said that while she was hosting with Philbin from 2001 to 2011, there were “good and bad days” “I don’t want to feel like I’m slamming anyone or that I’m being disrespectful. But I also want people to know it was not a cakewalk,” Ripa added, noting that it took “years” for her to find her niche and earn things like an office and a place to keep her computer. 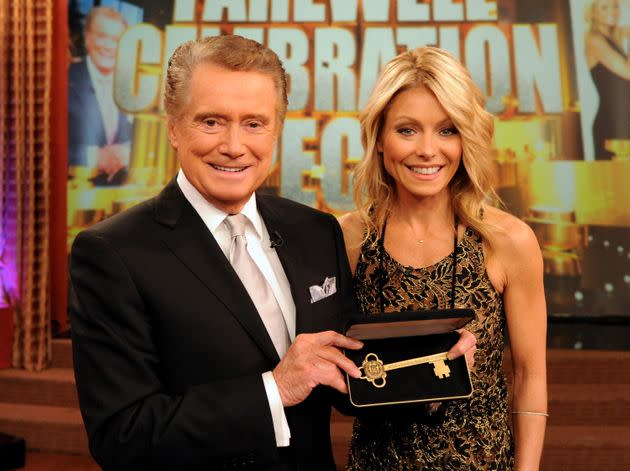 Ripa recounted getting the call to co-host alongside Philbin after his former partner Kathie Lee Gifford‘s departure. She was told repeatedly that ABC was not looking for a permanent replacement, which she thought was code for “It was very ominous, and it did not feel good.” “They want you to know who your boss is,”

Ripa recalled an exchange with Philbin on her first day hosting alongside him. “I came with hair and makeup. It was not an unusual thing for people on a television show to show up with,” she said. Just moments before she walked onstage, Philbin greeted her and executive producer Michael Gelman by saying, “Uh-oh, Gelman, it’s got an entourage.”

“I felt horrible,” TV host Ripa recalled of that time. “He was probably trying to be funny, but at the same time it felt like a pile-on. I understand that probably he didn’t want a co-host, but the network wanted me to be the co-host and I didn’t think I should pa**up that opportunity. I don’t think it was fair to him. But it was also not fair to me.” It wasn’t right for him, either. But it wasn’t fair to me in any way.”

Despite all of the difficulties, Ripa said she has nothing but love for Philbin, who died in July 2020 at 88 years old. “Off camera and outside of that building, it was a different thing,” she said I always had a great time whenever we were together. We went to the same resort for vacation, and he came to a dinner I hosted – one of my favorite nights ever.”

“The handful of times we spent together, I so enjoyed. We went to the same resort once on vacation and he came to a dinner I hosted – one of the favorite nights of my life. I never laughed so hard. I’d be satisfied if I could reach tenth place. It’s taking the audience on a journey with you and continuously reminding them that they’re the butt of the joke.”