When you first boot up Katana Zero, the new offering from studio Askiisoft, you immediately are struck by the retro feel of the graphics.  The neon blues and pinks splashed across the screen hearken back to the ’80s and brings to mind the Nintendo Entertainment System.  The music and themes are very retro-inspired, as well.  The game feels like a half Hotline Miami, half Ninja Gaiden hybrid. 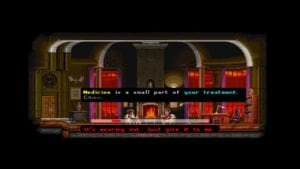 The side-scroller puts the player in the role of an assassin who uses a drug called Chronos to manipulate time and predict the immediate future, allowing players to plan out their attacks on each level.  The premise is simple:  use Chronos and your katana to slash and slide your way through multiple levels of enemies.  The control scheme is simple, hack and slash fare for the most part, until you start to “slide” through lasers and smash through doors while dispatching enemies with relative ease.  You almost feel immortal, until you get hit.  One hit and you’re done in this unforgiving quest for vengeance.  But that’s not all.  You don’t die, per se, you “rewind”, a side effect of your ability to predict the future.  As you slice your way through the game, the action sequences are interspersed with cutscenes that move the story along, featuring innovative in-game conversation that can be interrupted by the player with a click.  When you successfully complete a level, you get to re-watch your victory in security camera footage-style, which is quite a thrill when you’ve had to work hard to get through a level.

While the play style is one shot, one kill you can evade dispatch in several ways.  You can roll out of the way.  You can slow time and make your move.  You can even use your titular katana to swat bullets away.  The control scheme is easy to learn, but difficult to master.  Timing is everything in this game, and one wrong move will end up with the dreaded “No, that won’t work” screen as the security-camera style rewind of your actions brings you back to the start of the level.

It’s not all sunshine and rainbows, though, as the controls do feel slightly “soft,” in that they have what I’ve noticed a lot of Nintendo-based games have:  a little more “give” than games on other consoles.  At times, it feels like the character is still moving forward when you’ve stopped pushing the thumbstick on your Joy-Con.  It takes a little getting used to, to be sure.  The story is quite sparse as well, though that hardly matters–this isn’t a game dependent on what drives your nameless main character.

Its shortcomings are not enough to make the game unplayable, however, as Katana Zero is easily the best game released for the Switch since Super Smash Brothers Ultimate.  Blending cool, retro-graphics, evocative gameplay and a stylish soundtrack, Katana Zero is a must-play game for fans of classic Nintendo side-scrollers.  Katana Zero released April 18, 2019, for Nintendo Switch and PC.   This review was written based on the Nintendo Switch offering of the game.

Rich Davenport graduated from Concordia University in St. Paul Minnesota with a B.A. in Mass Communication. He is a lifelong comicbook reader, a film fan and a hardcore video gamer. He also makes a lot of funny faces in pictures, much to his wife’s chagrin.