You know, this one- 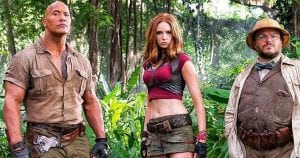 Did you notice something a little funky about the photo? How about that Gillan’s clothes are tiny? Well she has recently taken to Twitter to address this costume controversy, “Yes I’m wearing child sized clothes and YES there is a reason! The pay off is worth it, I promise!”

Jumanji! Yes I'm wearing child sized clothes and YES there is a reason! The pay off is worth it, I promise! #Jumanji pic.twitter.com/qBshnhwV6K

Dwayne Johnson also spoke up in an Instagram post saying that the “jungle wardrobe will make sense when you know the plot.”

So what’s the reason?

Some of us think that it is because Gillan’s character is like Robin Williams’ character Alan Parrish. Both were sucked into the game as children. But that is still just a theory.

However, both Johnson and Gillan’s responses hint that this theory is a possibility.

What do you think could be the